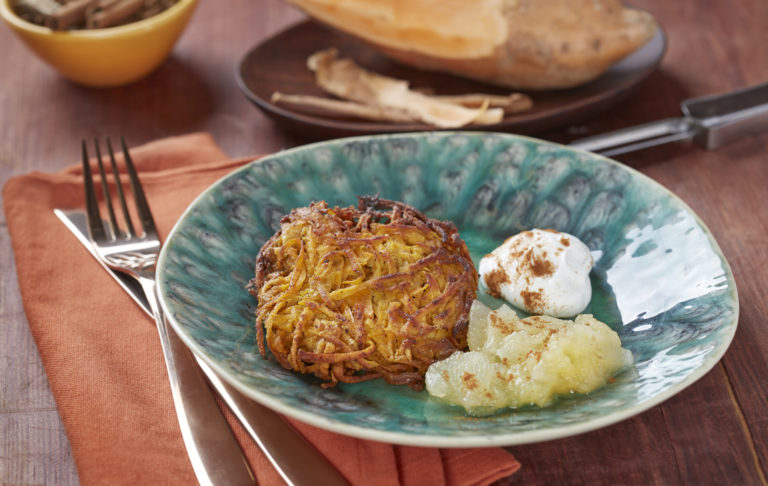 In 2013, Thanksgiving and Hanukkah overlapped for the first time in many years. We called it Thanksgivukkah! As a nod to this amazing confluence, I made these Sweet Potato Latkes to marry the spirit of these two family and feast holidays.

Make ahead tip: You can freeze your latkes after you’ve cooked them. Place them in a single layer on a parchment lined pan and freeze them in a zip-top bag. When ready to reheat, take them directly from freezer and place on cookie sheet in 350 degree oven for 15-20 minutes. Turn them over once to prevent burning.

Shredding directly into a bowl or a pot (rasps are much handier than box graters for this task). With only a single (medium to small) hole size, they work well for small quantities of hard cheese or other foods, such as baking chocolate and coconut.

Shredding soft cheeses (for tacos or mac-and-Jack) and harder foods (say, potatoes for hash browns); use the side with the large holes. The medium-size holes make smaller shreds of hard foods. The tiny holes turn out fine, crumblike Parmesan. The single horizontal sharp edge is for shaving thin slices of hard foods, such as carrots?it’s great if you’re slicing just one, but for a dozen consider a mandoline.

This is a nice comparison of box graters, and I’m glad you also included some 6-sided models (I didn’t even know they existed), as well as box sets. I am about ready to replace my basic model, and I will buy one that grips the counter or whatever else I put it on, since I’m tired of mine slipping. I think the box sets are interesting, since I don’t have a mandolin, and I also think being able to put them in a drawer is helpful, but I’m pretty clumsy, so these could get dangerous.