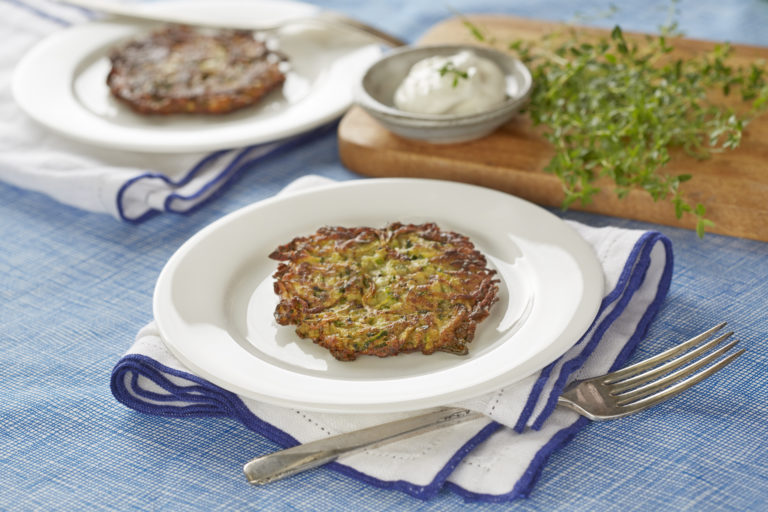 I decided to experiment with Zucchini Latkes when I wanted to explore a gluten-free option for friends. They turned out great. Fresh and light without losing their delectable crunchiness. We now have vegan substitutions too!

** For Vegan version, omit egg, arrowroot flour and Parmesan cheese and mix in aguafaba, chickpea-water mixture and nutritional yeast as detailed in the ingredients section above. Serve with our Vegan & Kosher Cashew Dipping Sauce or Tahini Sauce.

Make ahead tip: You can freeze your latkes after you’ve cooked them. Place them in a single layer on a parchment lined pan and freeze them in a zip-top bag. When ready to reheat, take them directly from freezer and place on cookie sheet in 350 degree oven for 15-20 minutes. Turn them over once to prevent burning. These latkes are a little more delicate than our others so handle with care.

Gluten Free Zucchini Latkes is very teasty but without eggs and parmezan. You can make this easy vegan.

iS THERE ANY WAY TO GET THIS DOWNLOADED OR COPIED?
i HAVE BEEN HOME DUE TO THE HORRIBLE VIRUS SCARE AND HAVE VERY LITTLE TIME TO GET THE INGREDIENTS!