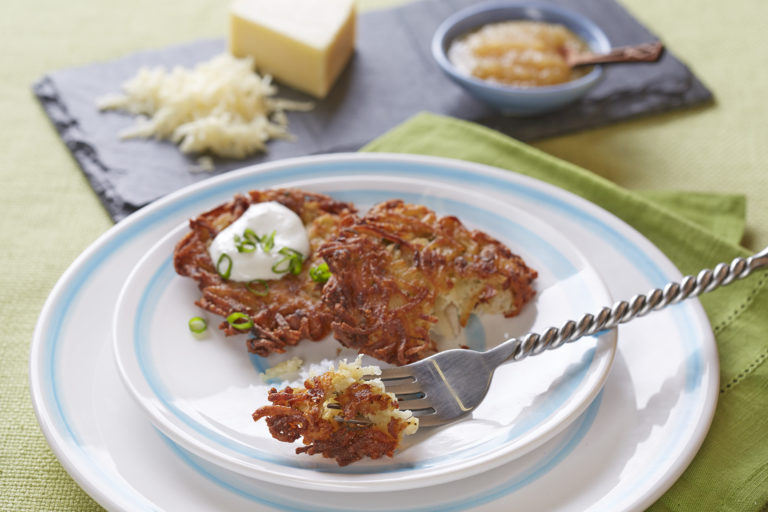 Many families and communities have their own latke variations.

I like to make Potato and Cheese Latkes to celebrate the heroic story of Judith whose bravery and ingenuity saved the Jews. Judith served salty cheese and a lot of wine to the General Holofernes in order to get him drunk (Book of Judith 10:5).

To commemorate Judith, we serve a lot of cheese dishes during Hanukkah. This latke variety is just plain delicious and the horseradish sour cream is the perfect companion.

Make ahead tip: You can freeze your latkes after you’ve cooked them. Place them in a single layer on a parchment lined pan and freeze them in a zip-top bag. When ready to reheat, take them directly from freezer and place on cookie sheet in 350 degree oven for 15-20 minutes. Turn them over once to prevent burning.

Your recipes sound awesome and I so would like it if I could print out a few of them.

Very good
Just made them

Mmmmmmm
Please include me in the future recipe emails
Grazie
✡️Margi-stuck in Sacramento
Tovapark@gmail.com

There is a print icon at the top of the recipe

Instead of frying them can you put them in the oven. I heard somewhere that you can do this. Pls reply.
Thank you.

cbmyles0311@gmail.com
Can you put them in the oven instead of frying.