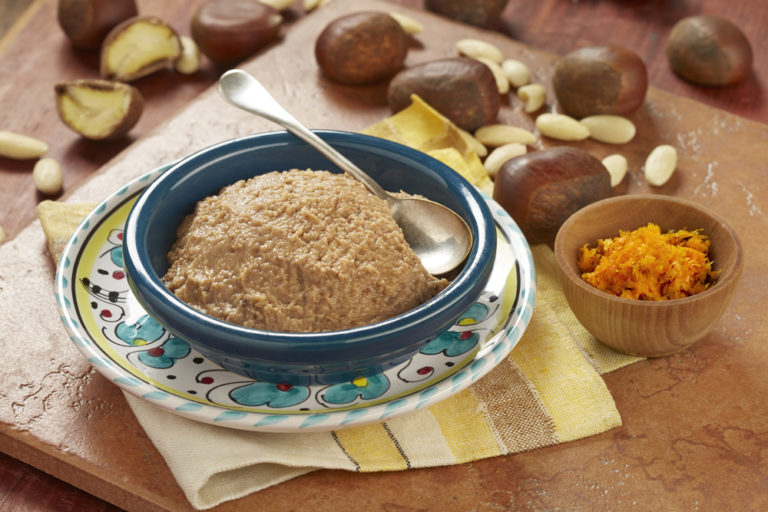 The Northern region of Italy, the Piedmont, is surrounded on three sides by the Alps. This region is dotted with nut trees, especially chestnuts. This recipe is rich with chestnuts and other nuts and brings to mind “chestnuts roasting on an open fire.”

History:
The main Jewish settlements in Piedmont began in the 15th century and consisted of Jews who escaped persecution in Eastern France. These Jews escaped a few decades after the Spanish persecutions, when in 1492 the Catholic King and Queen of Spain Ferdinand and Isabella forced all Jewish and Arab subjects to convert, flee or die on the stake.

Many Jewish families were forced to leave their homes between 1941 and 1943, and lived in the country or in the mountains until the Liberation of the North of Italy in late April 1945. They were concealed by Italian families or by groups of partisans who took the life-threatening risk of hiding Jews.

Despite this, all the Piedmontese Jewish Communities lost a very high number of members in the Nazi-fascist persecutions and deportations. Some of the smaller communities never recovered and closed their Synagogues after the War. This recipe is our attempt to honor their spirit.

May I ask for what the paste was used? Was it used to stuff pastries, for example? Or, is it a side dish?

Thank you for giving the history behind the recipie.It makes it interesting.

Charoset is a ritual component of the Passover Seder. It’s commonly understood to represent the mortar used by our ancestors when they were slaves in Egypt (and working construction). The most familiar charoset is a mixture of apples, walnuts, and wine, either coarsely chopped or ground to a paste.

The paste represents the mortar used in the building of pyramids when the Jews were slaves in Egypt.

Ummm,
Where is the fruit?
No apple, pear, anything?

Haroset is one of the ritual foods eaten at the Seder. It is symbolic of the mortar used by the slaves in Egypt to build (actually not the pyramids but whatever they had to build.) In the US most recipes call for apples and nuts but not chestnuts.

Charleston is eaten during the Seder, which is the ritual meal consumed on the first two nights of Passover outside of Israelmand on the first night of Israel. Pasties are not consumed during Passover. It’s eaten with matzah.

During the Passover meal, Charoseth is used as a symbol of the cruel labor by the Egyptians of the Jews in bondage. Charoseth represents the mortar for Pharaoh’s storehouses. “The labor seems sweet, knowing our redemption draws near.”

“In the midst of our trials, the redeemed have His Promise” in both the Old and New Testaments.

During the reenactment of the night before leaving Egypt, the Jewish people roasted a lamb and ate bread unleavened with roasted eggs and wild bitter herb dipped in salt water. Each food represents an action that happened in the exodus of Egypt.

Delicious a must try for me

Has the juice and zest of an orange in it.