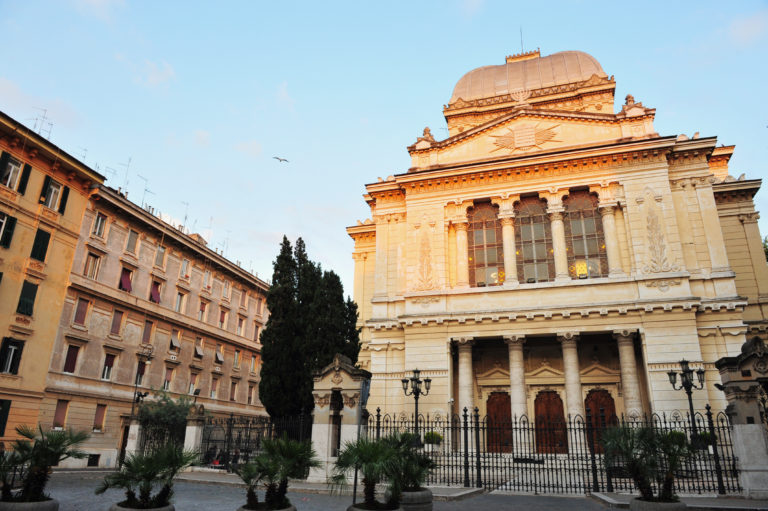 I asked an Italian Jewish friend to describe the essence of Italian Jews in his experience. He wrote the following:

“Growing up as an Italian Jew in the town of Borgosesia, and celebrating aspects of both traditions, my family often bridged the metaphorical gap with food – something which has tied together the two cultures in a harmony which has existed for well over two thousand years. In both cultures, food represents ways we communicate, share, love, and celebrate tradition. Aside from their culinary impact, the Jews have a long and storied history, intertwined with Italy…including the first Jewish ghetto which was a cultural epicenter in and of itself. It is safe to say Italy would not be the same country we see today without the contributions of the Jewish people – one which has striking similarity to that of the Jewish people as a whole – a story with peaks and valleys, resolve and resilience.”

For Breaking Matzo: Succot edition, we have made an Italian Feast to celebrate the Festival of Booths. We also feature Italian Charoset and Chocolate Matzo Mousse Cake (like a tiramisu) during Passover.

The history of Italian Jews is a case study in religious resilience. From their earliest days, Italian Jews set out to spread their religion and strengthen their communities. Despite every conceivable obstacle thrown in their way, Italian Jews continue to flourish today. The history of Jews in Italy actually hearkens back to the creation of a beloved holiday: Hanukkah. Judah Maccabeus, Hanukkah’s hero and a Jewish leader, made the move to the “Eternal City,” Rome, in the second century BCE. Many Jews followed Maccabeus to Rome. These Jews, while regarded uneasily by the Romans, grew significantly in Rome, even successfully converting many Romans. It should be noted that not all Jews in early Rome were free: there was a large slave population. However,

in 70 CE, the Romans destroyed the second Temple in Jerusalem, and began imposing harsher measures on Italian Jews. Jews were forced to pay a “Fiscus Judaicus” to fund a Roman temple devoted to Jupiter in lieu of their earlier payments for the now-destroyed temple. There were some sporadic expulsions. Nonetheless, Jews both free and enslaved founded several synagogues, and significant communities grew in Southern Italy.

With the advent of Christianity, Italian Jews began to see more oppressive regimes. In 313, Constantine issued the Edict of Milan, establishing Christianity as a legal religion in Rome. Constantine’s rule marked an oppressive era for the Jews, but conditions fluctuated with each successive emperor. In 380 CE, with the establishment of Christianity as the official religion of the empire through The Edict of Tessa Lonica of Teodosia, conditions worsened for the Jews. There was very little tolerance for this decidedly unofficial religion. It wasn’t until the fall of the Roman Empire in in 476 that Jews had some opportunity for tolerance and recognition. Conditions truly depended on whichever army controlled the region. While Jews were treated better under the Ostrogoths and the Lombards, later Byzantine rule proved to be oppressive.

The installment of Charlemagne in 800, followed by the Ottoman Empire, provided a period of peace and growth for Italian Jews. Schools and communities flourished under the relatively non-oppressive conditions. This period of quiet was brought to an end in about 1000 CE with the rise of the feudal and guild systems. Jews were excluded from guilds, allowed only to work as moneylenders or sellers of used clothing. Nonetheless, Jews found ways to thrive, particularly in large Southern communities. Many became prominent moneylenders and textile producers. Notable poet Shabtai ben Moses of Rome and his son, Talmudic scholar Jehiel Kalonymos, both wrote during this time. William Shakespeare’s The Merchant of Venice, written in 1598, featured Shylock, a character based on the moneylending Jews of this time. Shylock remains one of the most prominent and controversial portrayals of these Italian Jews.

In 1492, some Italian provinces were still under Aragon rule. Jews in these provinces were expelled by King Ferdinand and Queen Isabella, with over 37,000 Jews fleeing Sicily. A large number headed to Milan and Rome, while others opted for more tolerant provinces, such as Venice. Conditions worsened dramatically in 1516 with the establishment of the first Jewish ghetto in Venice. This was also the first usage of the word “ghetto.” 2016 is the 500th anniversary of the Jewish “Ghetto” in Venice. While imprisoned, Jews were required to wear identification and allowed only one synagogue per community. Despite harshly oppressive conditions, ghettos allowed Jews to come together and strengthen Talmudic study. The ultimate irony of these measures was seen in flourishing literature and community among these Jews.

The arrival of Napoleon in 1796 marked a temporary reprieve from ghettos. Although all Jews were expelled from the Papal State, those in Napoleon’s territory were legally first-class citizens. This exciting freedom was not long-lived. Jews were put back in ghettos following Napoleon’s defeat. In 1848, the House of Savoy unified the Italian states, giving Jews full political and civil equality. Italy, unified at last, had a period of growth and restoration, allowing its Jewish population to thrive freely and equally. This freedom was once again short-lived. In 1922, Mussolini came to power, and in 1929 he passed the Falco Laws, repealing freedom of religion

in Italy. By 1938, Mussolini had declared Italians part of the pure Aryan race, expelling Jews from public service. Many wisely chose to flee. In 1940, Mussolini allied with Hitler, with deportations beginning in 1943. Some Jews fled, while others fought with resistance movements. During this time, many Italian military authorities refused to participate in deportations or murders; some even assisted in evacuating Jews from Fascist-controlled Italy.

After the war, Jews were once again recognized as first-class citizens in Italy. Many surviving Jews chose to move to Israel, but a significant population elected to stay and reconstruct what Hitler and Mussolini had attempted to destroy. Their resilience continues today. According to the European Jewish Congress, there are 28,400 Jews in Italy today, and that number continues to grow.

*I would like to thank Gabriel Donnini and his family from Borgosesia, Italy for sharing their Jewish family traditions.

Population of Italian Jews in Israel: 10,000