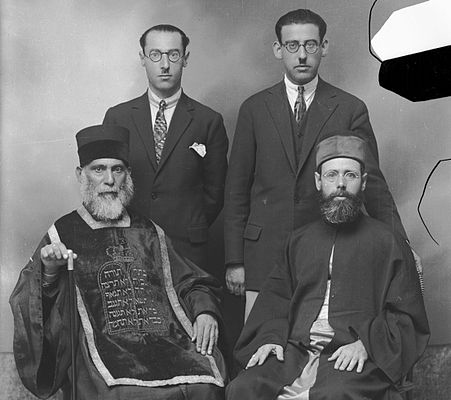 Since the central conflict in the story of Hanukkah is between the Jews and the Greeks, we decided to research the actual history of Jewish life in Greece. We consulted numerous sources and found a vibrant legacy of Jewish life dating from the fourth century BCE. Here is a digest of what we found on Wikipedia and in other sources.

(For more information on the Jews of Greece, please see our Other Hanukkah Sources) section.

The term “Greek Jew” is predominantly used for any person of Jewish descent or faith that lives in or originates from the modern region of Greece. The oldest, most characteristic Greek Jewish community are the Romaniotes, a distinct Jewish population that historically lived in communities throughout Greece and neighboring areas with large Greek populations.

Greece once had a large population of Sephardic Jews, and is a historical center of Sephardic life. The city of Salonica (or Thessaloniki) in Greek Macedonia, was called the “Mother of Israel.” Greek Jews played an important role in the early development of Christianity, and became a source of education and commerce for the Byzantine Empire and throughout the period of Ottoman Greece. In spite of Greek efforts to save them, the Jewish community was devastated after Greece was conquered and occupied by the Axis powers in spite. After the Holocaust, a large percentage of the surviving community emigrated to Israel or the United States.

Today, the Jewish community in Greece is estimated as fewer than 8,000 people, concentrated mainly in Athens, Thessaloniki (or Salonica), Larissa, Volos, Chalkis, Ioannina, Trikala and Corfu, while very few remain in Kavala and Rhodes. Greek Jews today largely “live side by side in harmony” with Christian Greeks, according to Giorgo Romaio, president of the Greek Committee for the Jewish Museum of Greece, while nevertheless continuing to work with other Greeks, and Jews worldwide, to combat any rise of anti-Semitism in Greece.

Most Jews in Greece are Sephardim, but Greece is also the home of the unique Romaniote culture. Besides the Sephardim and the Romaniotes, some Italian-Sicilian and small Ashkenazi communities have existed as well, in Thessaloniki and elsewhere. These communities had their only their own customs (minhag) and printed their own siddurim for use in the synagogues in Greece.

The Romaniote Jews have lived in the territory of today’s Greece for more than 2000 years. Their historic language was Yevanic, a dialect of the Greek language, but Yevanic has no surviving speakers recorded. Today’s Greek Romaniotes speak Greek. Large communities of Romaniotes were located in Ioannina, Thebes, Chalcis, Corfu, Arta, Corinth and on the islands of Lesbos, Chios, Samos, Rhodes, and Cyprus, among others. The Romaniotes are historically distinct from the Sephardim, some of whom settled in Greece after the 1492 expulsion of the Jews from Spain. All but a small number of the Romaniotes of Ioannina, the largest remaining Romaniote community not assimilated into Sephardic culture, were killed in the Holocaust. Ioannina today has 35 living Romaniotes.

History of Judaism in Greece 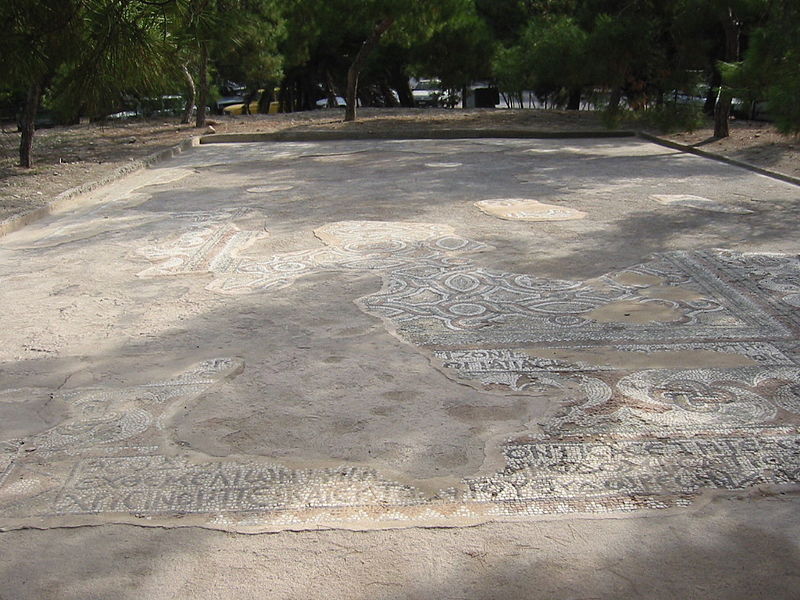 Mosaic Floor of a Jewish Synagogue in Greece – 300 CE, Aegina.

The first recorded mention of Judaism in Greece dates from 300-250 Before Common Era (BCE) on the island of Rhodes.

Archaeologists have discovered ancient synagogues in Greece, including the Synagogue in the Agora of Athens and the Delos Synagogue, dating to the 2nd century BCE.

Greek Jews played an important role in Greek history, from the early History of Christianity, through the Byzantine Empire and Ottoman Greece, until the tragic near-destruction of the community after Greece fell to Nazi Germany in World War II.

During World War II, Greece was conquered by Nazi Germany and occupied by the Axis powers. 12,898 Greek Jews fought in the Greek army, one of the best-known amongst them being Colonel Mordechai Frizis, in a force which first successfully repelled the Italian Army, but was later overwhelmed by German forces. Some 60,000-70,000 Greek Jews, especially jurisdictions where Nazi Germany occupied and Bulgaria, or at least 81% of the country’s Jewish population, were murdered. Thousands of Jews were saved by the Greek Orthodox Church hierarchy due to a proclamation by Archbishop Damaskinos, instructing the church to issue false baptismal certificates to all Jews who requested them. Although the Germans deported a great number of Greek Jews, others were successfully hidden by their Greek neighbours.

On July 11, 1942, the Jews of Thessaloniki were rounded up in preparation for slave labour. The community paid a fee of 2 billion drachmas for their freedom. In addition to the destruction of the old Jewish cemetery, located in the center of the city. 50,000 people were sent to Auschwitz, and most of their sixty synagogues and schools were destroyed. Only 1,950 survived. Many survivors emigrated to Israel and the United States. Today the Jewish population of Thessaloniki numbers roughly 1,000, and maintains two synagogues. 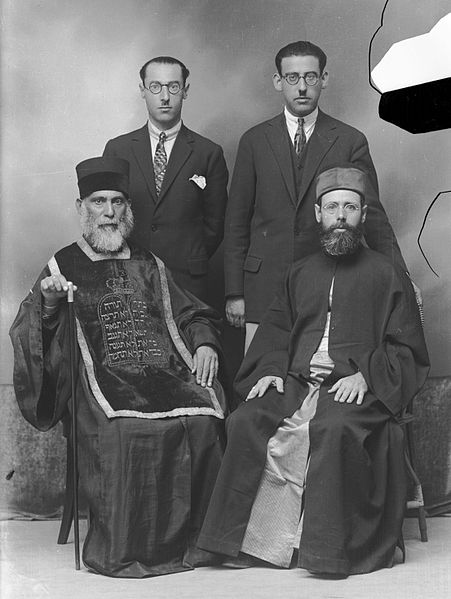 Members of the Romaniote Greek Jewish Community of Volos: Rabbi Moshe Pesach (front left) with his sons (back)

The Romaniote Jews or Romaniots (Greek: Ρωμανιῶτες, Rōmaniōtes) are a Jewish community with distinctive cultural features and who have lived in the territory of Greece and neighboring areas for more than 2,000 years. Their languages were Yevanic, a Greek dialect, and modern Greek. They derived their name from the old name for the people of the Byzantine Empire, Romaioi. Large communities were located in Thebes, Ioannina, Chalcis, Corfu, Arta, Corinth, and on the islands of Lesbos, Chios, Samos, Rhodes, and Cyprus, among others. The Romaniotes are historically distinct from the Sephardim, who settled in Greece after the 1492 expulsion of the Jews from Spain.

The Romaniotes are distinct from both Ashkenazim and Sephardim. Romaniote oral tradition tells that the first Jews arrived in Ioannina shortly after the destruction of the Second Temple in Jerusalem in 70 CE. Genetic testing on Romaniotes shows a common ancestry with Ashkenazi Jews.

A majority of the Jewish population of Greece was killed in the Holocaust after Axis powers occupied Greece during World War II. They deported most of the Jews to Nazi concentration camps. After the war, a majority of the survivors emigrated to Israel, the United States, and Western Europe.

The name Romaniote refers to the medieval Eastern Roman Empire, which included the territory of modern Greece, and was for centuries the homeland of this Jewish group. Historically, the Empire was commonly referred to as Romania (Ῥωμανία) and its citizens Romans. 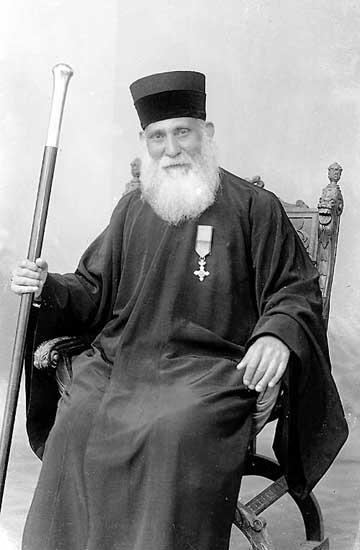 The earliest reference to a Greek Jew is an inscription dated c. 300-250 BCE, found in Oropos, a small coastal town between Athens and Boeotia, which refers to “Moschos, son of Moschion the Jew”, who may have been a slave. 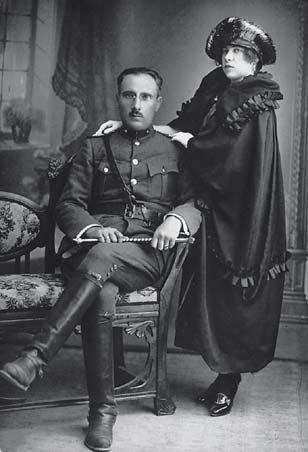 Colonel Mordechai Frizis (1893-1940) from the ancient Romaniote Greek Jewish community of Chalkis with his wife Victoria.

Waves of Sephardi Jews were expelled from Spain in 1492; many settled in Ottoman-ruled Greece. They spoke a separate language, Ladino. Thessaloniki had one of the largest (mostly Sephardi) Jewish communities in the world and a solid rabbinical tradition. On the island of Crete, the Jews historically played an important part in the transport trade. In the centuries following 1492 most of the Romaniote communities were assimilated by the more numerous Sephardim.

At the beginning of the 20th century, the Romaniote community of Ioannina numbered about 4,000 people, mostly lower-class tradesmen and craftsmen. Their numbers dwindled after that due to economic out-migration. On the eve of World War II, there were approximately 1950 Romaniotes left in Ioannina. Centered around the old fortified part of the city (or Kastro), where the community had been living for centuries, they maintained two synagogues, one of which, the Kehila Kedosha Yashan Synagogue remains today.

The Romaniotes had distinct customs, very different from those of the Sephardic Jews, and closer to those of the Italian Jews. Some tradtions are thought to have been based on the Jerusalem Talmud instead of the Babylonian Talmud (see Palestinian minhag). Unlike the Sephardic Jews, they did not speak Ladino, but the Yevanic Greek dialect and Greek. Tobiah ben Eliezer (טוביה בר אליעזר) a Greek-speaking Talmudist and poet of the 11th century worked and lived in the city of Kastoria. He is the author of the Lekach Tov a midrashic commentary on the Pentateuch and the Five Megillot and also of some poems. Romaniote scholars translated the Tanakh into Greek. A polyglot edition of the Bible published in Constantinople in 1547 has the Hebrew text in the middle of the page, with a Ladino (Judaeo-Spanish) translation on one side and a Yevanic translation on the other. 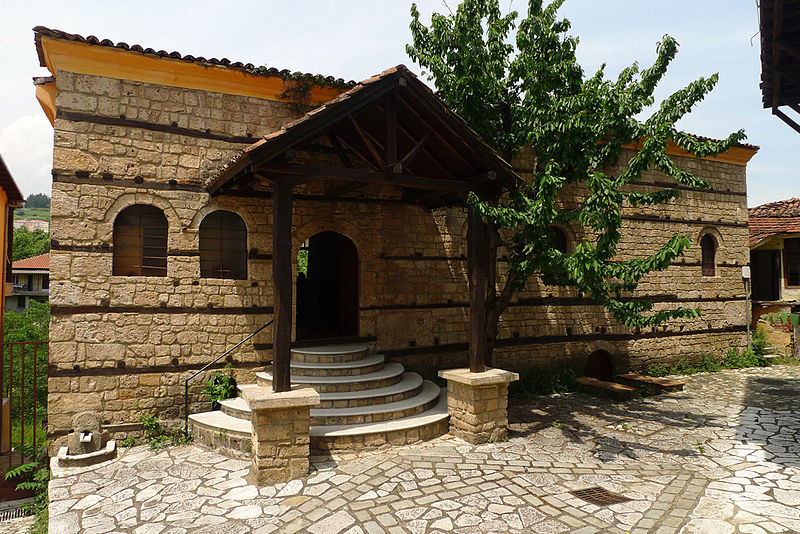 Exterior view of the Romaniote Jewish synagogue of Veria.

The Holocaust and Greek Jews 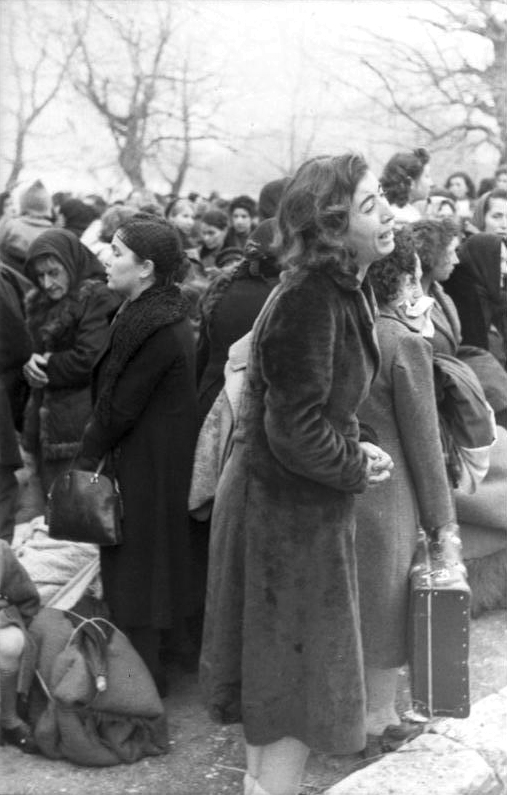 During World War II, when Greece was occupied by Nazi Germany, 86% of the Greek Jews, especially those in the areas occupied by Nazi Germany and Bulgaria, were massacred despite efforts by the Greek Orthodox Church and many Christian Greeks to shelter Jews. Although the Nazis deported numerous Greek Jews, many were hidden by their Greek neighbors. Roughly 49,000 Jews – Romaniotes and Sephardim – were deported from Thessaloniki alone and murdered.

The Romaniotes were protected by the Greek government until the Nazi occupation. During the German occupation, the Romaniotes’ ability to speak Greek enabled them to hide better from German deportations.

The creation of the state of Israel in 1948, combined with the violence and anarchy of the Greek Civil War, was the final episode in the history of the Romaniotes in Greece.

Today approximately 8,000 Jews remain in Greece. Of these, only a small number are Romaniotes, who live mainly in Thessaloniki, Ioannina, and Athens. About 3,500 Jews now live in Athens, while another 1,000 live in Thessaloniki. The vast majority of Romaniotes have relocated to Israel and the United States. Mosaic Floor of a Jewish Synagogue in Greece – 300 CE, Aegina. Kehila Kedosha Janina, New York City.

Mosaic Floor of a Jewish Synagogue in Greece – 300 CE, Aegina. 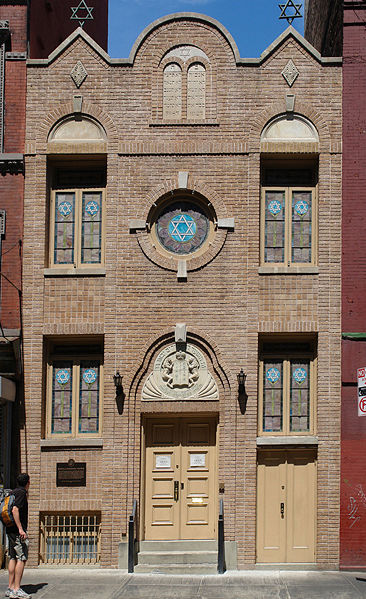 Only one Romaniote synagogue is in operation in the entire Western Hemisphere: Kehila Kedosha Janina, at 280 Broome Street, in the Lower East Side of Manhattan, where it is used by the Romaniote emigrant community. It maintains a mailing list of 3,000 Romaniote families, most of them living in the tri-state area, but it often has difficulty meeting the minyan or quorum for worship on Shabbat and Jewish holidays. It is open for services every Saturday morning as well as all major Jewish holidays. The synagogue also houses a museum devoted to Greek Jewry and offers guided tours to visitors on Sundays.