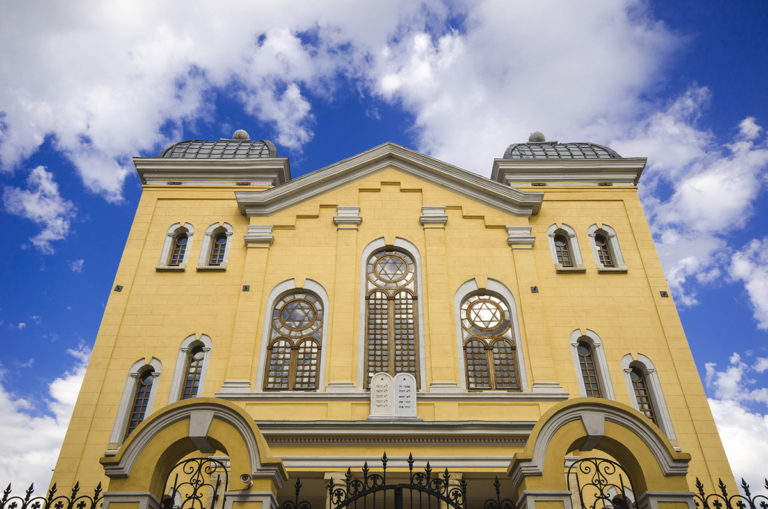 Did you know that the first Hebrew printing press was invented in Instanbul in 1493?

Turkey has been a place of refuge for scores of persecuted Jews for centuries. Jewish settlements in the Turkey region date back to 4th century BCE and include the ancient cities Ephesus, Sardis, Pergamon and Smyrna (now known as Izmir). While Izmir was known for its large Jewish community, Sardis was known for its ancient synagogue built in 220 BCE. Its ruins still stand today. Other synagogues in Turkey include the Ahrida Synagogue founded in 1460, Zulfaris Synagogue (1671) and the Beit Yaacov synagogue (1878). With such rich history, it is easy to see the strong influence of the Jewish community in the early years of the Ottoman Empire and throughout the history of Turkey.

Turkey’s reputation as a safe haven for Jewish refugees began in 1492 when Jews were being persecuted in Spain. At the time, the King and Queen of Spain, Ferdinand and Isabella, ordered Jews to convert to Christianity or leave the country. When Sultan Bayezid II heard this, he welcomed the Sephardim, the term given Jews leaving Spain as a result of 1492 expulsion, into the Ottoman Empire. These Romaniote Jews were predominantly Greek Jews who had been living in the Eastern Mediterranean more than 2,000 years. The influx of Sephardim Jews in Turkey overwhelmed the existing Romaniote Jewish community. Eventually, the Romaniote culture was completely consumed by the Sephardim.

Under the Byzantine rule of Turkey’s early years beginning in AD 395, Jewish communities were oppressed and segregated. Jews could not live amongst Christians, were not allowed in civil service or the military, and could not marry non-Jews. Conversion to Judaism was also illegal.

Things changed during Ottoman Empire, established in 1299, under the rule of Sultan Orhan (1323-1362) who allowed Jewish people to build their first synagogue. The synagogue was named Etz ha-Hayyim, or “Tree of Life” which remained in service until approximately 50 years ago.

Mehmed II, also known as Mehmed the Conqueror, took over Constantinople in 1453 and found an oppressed Jewish community. Mehmed worked to give the Jewish people more opportunities and freedom. He appointed Hekim Yakuo Pasa, a Jew, as his minister of finance and physician Moses Hamon as Chief Physician to the Sultan. Mehmed also designated a Jewish grand rabbi and put plans in place to repopulate Constantinople through the establishment of many communities. Around this time, the Ottoman Empire began encouraging the immigration of Jews to their land. Jews received three invitations to immigrate to the land acquired by the Ottomans. Two invitations were made by Muslim sultans Muhammad II in mid-15th century and later Bayezid II in 1492. In a 1454 invitation from Rabbi Yitzhak Sarfati , he wrote: “Here every man dwells at peace under his own vine and fig tree”. The Rabbi sent the invitation in hopes of helping Jews throughout Europe could escape persecution by coming to Turkey. Thus, the Ottoman Empire became a safe place for European Jews trying to escape religious persecution.

By 1477, 11% of the households in Istanbul were Jewish. With a growing Jewish population as a result of increasing immigration, the Ottoman Empire enjoyed an extended period of prosperity and influence. One significant development was the invention of the printing press in 1493. David and Samuel ibn Nahmias created the first Hebrew printing press in Istanbul and went on to print the first book ever printed in the Ottoman Empire in December of 1493, Arbaah Turim (Four Orders of the Code of Law).

There were 80,000 Jews living in Turkey when Israel was established in 1948. This is thought to be the pinnacle of the Jewish population in Turkey. The freedom that Jewish communities enjoyed during this time led to the creation of exceptional literature and religious texts, advancing their spirituality.

In 1856, the proclamation of Hatti Humayun made all Muslim and non-Muslim Ottoman citizens equal under the law. As a result, leadership shifted its emphasis from the religious to the secular. The Ottoman Empire collapsed during WWI and the Turkish Republic rose with Mustafa Kemal Ataturk elected president. Under this new government, a secular constitution was created and the Caliphate was dissolved. When Turkey was recognized by the Treaty of Lausanne in 1923, it presented minority rights to the three principal non-Muslim religious minorities, Judaism being one, allowing them to continue their religious education and social institutions.

Today, the Jewish population in Turkey is approximately 17,200 out of a total population of 70 million. Approximately 330,000 – 450,000 Turkish Jews live around the world with 280,000 of those living in Israel. The Turkish Jews hold strongly to their cultural roots and pay homage to their history through such traditions as making bourekas and stuffed grape leaves. Although bourekas have Balkan roots and stuffed grape leaves were brought by the Romaniote Jews to Turkey, they still serve as important cultural ties to Turkey. Be sure to see our recipes for Potato Leek Bourekas and Spinach & Feta Bourekas.

Fun Fact:
Did you know that a Jewish diplomat, Salamon ben Nathan Eskenazi, was the first to construct diplomatic ties between the Ottoman Empire and the British Empire?