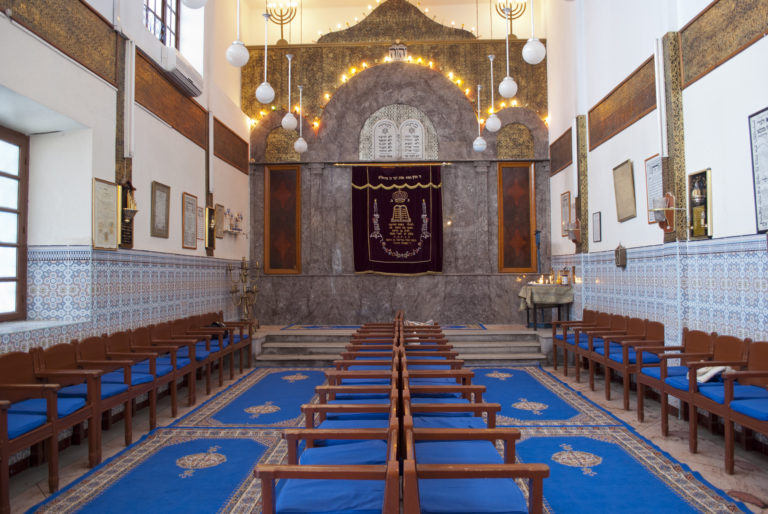 “The essence of Moroccan Jews are their warm hearts, welcoming nature, and their passion for tradition and keeping those traditions that were passed down from their parents, grandparents and those before them alive. These traditions are kept alive mainly during special and memorable events with family, friends and loved ones.

Some of those traditions can be seen on the Shabbat table, when you see the typical tangy and spicy red colored fish dish, Chraime for dinner on Friday, or the Adafina (also called Hamin in some places) on Saturday. You will see some to these traditions staying alive when you join a Moroccan family for Passover, and during the traditional Bibhilu, where the head of the household takes the Seder plate and blesses each one of the people around the table by passing over them with the plate…and bouncing the plate on their heads! Then once Passover is over, the “Mimouna,” where Moroccan Jews will share dishes and desserts with family and friends, in some cases going from house to house and enjoying everybody’s delicious recipes in their houses.

My parents always shared stories about how they would go out in Mimouna and not come back until after midnight or so, after going with friends from house to house around their Jewish neighborhood in Tetouan. And even where there is no food, like on Yom Kippur, you can recognize a Moroccan Jew by looking at those going to a synagogue wearing a white suit or white/bright colors; also by seeing the last ones coming out of the service in Yom Kippur. For some reason we always finish after the Ashkenazis. We can’t forget the traditional party for a Moroccan Bride before the wedding – the Henna. The big feast for the bride, family and friends, where she will wear the typical black and gold dress; in some case worn decades before them by their mother and her mother before her. Again, at the end, I think it is all about keeping tradition alive, enjoying those traditions with friends and family and making those special and memorable. Then passing those to your children and hoping those will continue to go down to their children’s children as it has for thousands of years.”

Jews in Morocco date back to the earliest reaches of Morocco’s history. Jews in the Roman Empire pre-dated Christ, and those Jews most likely migrated along the Mediterranean into what is now Morocco. They created communities and converted natives to Judaism. In the eighth century, Arab armies built up an empire that included both Morocco and Spain. Towards the end of the eighth century, Idriss I created the first Muslim state in the central and western areas of Morocco. With Idriss I fighting and forcing conversions, Jews and Christians fled to Moroccan regions not under his domain. In the early ninth century, Idriss I’s son, Idriss II, founded Fez. He invited the Jews to live alongside the Arabs in Fez. Although the Jewish community remained considerably restricted, Fez did offer opportunities for prosperity. Jews remained there peacefully for the ninth and tenth centuries.

In the eleventh and twelfth centuries, the Almoravides, a Berber tribe, created an Islamic empire that contained Morocco. They founded Marrakesh, the capital, near a Jewish settlement called Aghmat. Jews were not allowed to enter Marrakesh during the daytime, but nonetheless found relative freedom in this empire. Many Jewish scholars migrated to the empire and found it an ideal space to produce religious writings. However, in the twelfth century the empire was overtaken by the Almohads, who adopted a fundamentalist Islamic agenda. They persecuted Jews all over Morocco; Maimonides, who lived in Morocco from 1159-1165, advised all Jews to leave the country. Jewish communities were decimated, and, in some cases, completely eradicated.

The tides turned in the thirteenth century, when the Almohads were overthrown by the Merenids. The Merenids actually gave the Jews preferential treatment. When Fez was threatened with pogroms, the Merenids established New Fez so the sultan could ensure Jewish safety. In 1438, as the Merenids lost control of Morocco, they forced the Jews to live in a fortified area adjacent to the royal palace. This was the first Jewish quarter in Morocco; it was built on a salt mine and called mellah, the Arabic word for salt. All subsequent Jewish quarters were also called mellahs. The Merenids were overthrown by the Wattasids in 1472. The Wattasids neither challenged Portuguese expansion nor took a stance on refugees ousted by Queen Isabella, remaining relatively neutral. Many of these refugees passed through Morocco, with 20,000 opting to stay.

In the 16th and 17th centuries, the Saadian dynasty took over. While placing heavy taxes on Jewish citizens to finance the military, they also ensured Jews were financially stable by giving them a monopoly over sugar. This made Jews an integral part of the caravan trade. In the 1660s, the current ruling family, the Alaouties, came to power. Their first ruler, Moulay Rachid, captured caravan routes to ensure that Jews would help finance his new empire. He protected the Jews throughout his reign, although he continued the tradition of taxing them heavily. Moulay Ishamel, Rachid’s successor, stabilized Morocco and made Jews construct the Meknes mellah. This prosperous mellah attracted Jewish immigrants from all over Morocco, and Jewish traders grew rich.

After Ishamel’s death and a period of 30-year tumult, Moulay Mohammed came to power, establishing the port of Mogador. Mohammed required all trade to go through Mogador, and encouraged wealthy Jews to send their family members to Mogador as traders. Mohammed’s son, Moulay Yazid, hated the Jews, and from 1790-1792 waged pogroms on them, specifically targeting Fez and Meknes. However, sultans after him allowed Jews to rebuild in the mellahs, although these sultans had increasingly less control of the country. In February 1864, Sultan Sidi Mohammed issued a royal decree proclaiming that Jews would be treated as equals under the law. However, in the following years European countries were suspicious that Morocco continued to oppress its Jews. This seemed to be untrue, and in 1906 U.S. representatives praised the government for its treatment of Jews.

After the killings of a few Europeans in Casablanca and Marrakesh in 1907, the French found an excuse for an invasion of Morocco, occupying Casablanca and pillaging the mellah. The French and Spanish governments both took significant sections of Morocco from 1907-1912, making Tangier an international zone. By 1941, the Vichy government of France imposed oppressive laws upon Moroccan Jews, setting quotas on doctors, lawyers, and students, and forcing many Jews into mellahs. In 1942, with the arrival of American troops, the French closed off a few mellahs and eventually repealed the oppressive laws. The Sultan, Mohammed V, announced his opposition to the oppressive laws and asked Muslims not to hurt the Jews, saying they were loyal subjects. However, with the emigration to Israel and tumult from the Israeli-Arab conflict, two pogroms occurred in June 1948. These pogroms targeted two eastern towns, Oujda and Djerrada. Muslim leaders were deeply upset and personally met with victims’ families. After these attacks, from 1948-1956, 90% of Moroccan Jews left the country. The poorer went to Israel, while richer Jews immigrated to Canada and France. Today there are fewer than 7,000 Jews in the country.

Even though the Moroccan Jews remain relatively scattered, their heritage remains strong.

Worldwide, there are over a million Moroccan Jews.

*I would like to thank David Benaim and his family from Tetouan, Morocco for sharing their Jewish family traditions as well as their recipes for Chraime and other Moroccan dishes.