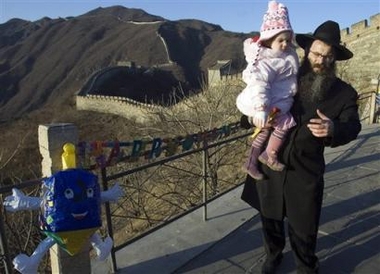 Jews have had a long history in China. Jewish settlers have been documented in China as early as the 7th or 8th century CE. Many more arrived as refugees from the Russian Revolution of 1917. A surge of European Jews and Jewish families arrives in the late 1930s and 1940s, seeking refuge from the Holocaust in Europe.

A wave of 18,000 Jews from Germany, Austria, and Poland immigrated to Shanghai in the late 1930s and the early 1940s. Shanghai at the time was an Open City, which meant that it did not have restrictions on immigration. Chinese diplomats such as Ho Feng Shan issued “protective” passports to would-be Jewish immigrants.

Chiune Sugihara, a key player in the Fugu Plan, was a Japanese diplomat who served as Vice-Consul for the Empire of Japan in Lithuania. During World War II, he helped thousands Jews leave the Lithuania by issuing transit visas to Jewish refugees so that they could travel to Japan and resettle in Shanghai.

In 1943, the occupying Japanese army required these 18,000 Jews, formally known as “stateless refugees,” to relocate to an area of less than one-square mile. Think about this: the total number of Jews entering Shanghai during this period equaled the number of Jews fleeing to Australia, Canada, India, New Zealand and South Africa combined. Many members of the Chinese community later moved to and became founders of modern Israel.

Late in the War, Nazi representatives pressured the Japanese army to devise a plan to exterminate Shanghai’s Jewish population. Eventually their plan became known to the leaders of the Jewish community. By this point in the war, the Japanese had no intention of further provoking the anger of the Allies after their already notorious invasion of China and a number of other Asian nations, and they delayed the German request until the War ended. The intercession of the Amshenower Rebbe and the translation skills of Leo (Ariyeh) Hanin, the Japanese ultimately kept the Jews of Shanghai safe.

The Jewish connection to China endures. In 2005, the Israeli embassy to China held their Hanukkah celebrations at the Great Wall of China.

In 2007, the Sephardic community of Shanghai opened a synagogue, study hall, kosher kitchen, and began offering educational classes for children and adults.