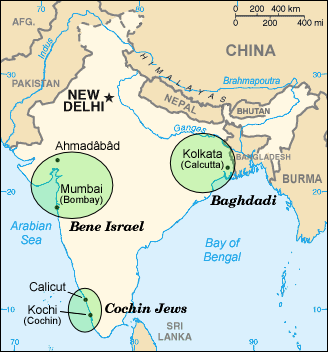 The first Jews in India are believed to have settled on the Malabar coast around the middle of the 9th century BCE –  some 2,800 years ago.

After the death of King Solomon [931 BC],  Israel split into two Kingdoms, Israel and Judah, ruled by rival kings for more than 200 years, until the Assyrians conquered the northern kingdom and carried off most of the population. These are the Lost Tribes of Israel, and some of them are believed to have fled to India and settled on the Konkan coast and in Kerala.

–  Jo Cohen, April 24, 2007, Excerpts from her speech, “Traders from the Middle East: The Jewish Community in Calcutta”

Of all the Diaspora communities, the Jews of India are among the least known but perhaps among the most interesting. This post introduces us to three of India’s major historical Jewish communities: Bene Israel, a 2800 year old community settled mainly in and around Mumbai; Cochin Jews, an ancient 2000 year old community whose members have mostly emigrated to Israel; and Baghdadi Jews, a 300 year old community based in Calcutta that originated from Jewish business people who came from Baghdad beginning in the 17th century..

Judaism is one of the first foreign religions to arrive in India with history dating back to King Solomon’s reign in 970-931 BCE. The population of Jews remaining in India is very small, but their cultural history is vast. 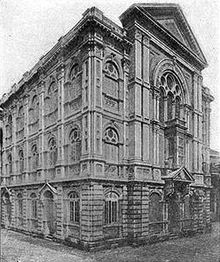 The story of the Bene Israel (“Sons of Israel”) ancestors tells of members from the “Ten Lost Tribes” of Israel that escaped persecution from Greek ruler Antiochus Epihanes in the year 175 BCE. They landed shipwrecked on the shores of Navgaon, now the site of a historic Bene Israel cemetery. They are the oldest and largest group of Indian Jews.

Despite the loss of their holy books when they arrived in India, they persevered and continued to observe the sabbath, celebrate the major festivals, circumcise their sons and perform most of the prescribed offerings mentioned in the Bible.

Settling in Konkan, the Bene Israelis learned the native Marathi language and adopted local customs. They took up oil pressing and became known as “Shanwar Telis” (Shabbat-observing oilmen.) To assimilate into the local culture they gave themselves Hindu names similar to their Biblical first names, but became known by their “-kar” surnames, which indicated the village in which they lived; for example, Navgaonkar came from the village of Navgaon. More than one hundred village surnames can be found among members of the Bene Israel community today. Due to years of intermarriage between Jews and Indians and assimilation into the culture,the Jews began to resemble the Maratha people in appearance and customs.

It wasn’t until the eighteenth and nineteenth century that teachers from Baghdad and Cochin taught them mainstream Judaism. It was then that they were finally able to read the Torah, and build on their Jewish teachings and culture.

In the mid-18th century, developments in transportation and opportunities for jobs in the army brought many Bene Israelis to Bombay. Under the rule of Governor Gerald Aungier, Bombay was very tolerant of different religions and Jews were able to practice freely. The Bene Israelis were a strong driving force for the British army at this time, known for their spirit and valor.

Commandant Samaji Hasaji Divekar was a legendary Bene Israeli soldier who was captured while fighting for the British against the kingdom of Mysore in South India. He was ordered to be executed by the King of Mysore, Tipu Sultan, when the king’s mother miraculously intervened and argued that he was protected by the Koran as one of the Chosen People and therefore should not be killed. Afterwards, Divekar went on to build the first Bene Israeli synagogue in India. Built in 1796, the synagogue was named “Shaar Harahamim,” or “Gate of Mercy”.

Bene Israelis were a large presence in Mumbai, known for excelling in the Army, Navy, and Air Force, as well as holding high positions in government. The first Bene Israeli school was built in 1875 by Samuel Haeem Kehimkar and was named “Israelite School,” although it was renamed in 1934 to Sir Elly Kadoorie School. Dr. E. Moses, a Bene Israeli, was mayor of Bombay in 1937. Bene Israelis also worked as doctors, lawyers, engineers, writers, educators, architects, and social workers.

By the time of Indian Independence in 1947, the Bene Israeli population stood at about 20,000. When Israel was established in 1948, however, this number dramatically dropped due to the high amount of immigration to the new state. The Bene Israeli community in India now lives primarily in Mumbai, with the population remaining in India only about a thousand.

Here’s an article on the immigration of Indian Jews to Israel:

Cochin Jews, also known as the Kerala Jews, are a diverse group, beginning with the so-called “Black Jews” who are said to have settled on the Malabar coast during the times of King Solomon of Israel, arriving as sailors who came to India for trade. It is also said that many Jewish exiles fled to India following the destruction of the First Temple during the Siege of Jerusalem in 587 BCE. Records show that after the destruction of the Second Temple in 70 CE, thousands of Jewish settlers arrived in the ancient port of Cranganore, near Cochin. They formed many small communities in coastal towns surrounding Cochin, speaking a Judeo-Malayalam tongue. Much later, in the fifteenth century, Pardesi, or “White Jews” arrived from western European countries such as Holland and Spain. They spoke the ancient Sephardic language of Ladino.

In 1524, the Moors, backed by the ruler of Calicut (Kozhikode) attacked the Jews believing they were tampering with the pepper trade. Most Jews fled to Cochin and went under the protection of the Hindu Raja, who granted them an area to create their own town which later acquired the name “Jew Town,” by which it is still known today.

Unfortunately for the Jews of Cochin, the Portuguese occupied Cochin in this same period and persecuted the Jews until the Dutch displaced them in 1660. The Dutch protestants were tolerant and the Jews prospered. British influence then came to Cochin in 1795, and Cochin Jews once again lived peacefully. In 1891, there were 1,142 Jews living in Cochin.

The vast majority of Cochin Jews have since emigrated, intermarried, and converted. Today’s population has withered to approximately 50.

The Baghdadi Jewish community consists of Jews who are descendants of immigrants from Baghdad, Iraq and surrounding areas. The history of Jewish tradesmen from Baghdad traveling to India dates back to the sixteenth and seventeenth centuries.

The city of Surat (present day Gujarat) was previously a main commercial city in India and where many Baghdadi Jews originally settled. They operated many small businesses and became important figures in the Indian economy. The Sassoon family is a Baghdadi family known for their business activities as well as their contributions to India, including hospitals, schools, libraries, and monuments.

The city of Calcutta (present day Kolkata), was also a commercial hub that attracted many visitors, including Jews. It was previously the capital of British India, and many Jews would visit for trade. The first recorded Jew to settle in Calcutta was Shalom ben Aaron ben Obadiah Ha-Cohen, who arrived on August 1, 1798 from Aleppo, Syria. He had first visited Surat, where he met his business partner Jacob ben Semah ben Nissim, and started establishing trade operations. Shalom Cohen was very successful in not only business, but in establishing a thriving Baghdadi Jewish community in Calcutta.

The wealthier Baghdadi Jews became more assimilated into British culture, speaking mainly in English and adopting British customs. In the late 19th century, many wealthy Baghdadis moved to England. Those who remained in India became more assimilated into Indian society as well as other Indian Jewish communities. In the 1940s, the number of Baghdadi Jews in India was 7,000. Today, that number has lessoned dramatically to only about 50. The community in Calcutta is small, but still thriving with three synagogues, a cemetery, and the legendary bakery, Nahoum’s.

In December of 2020 Israel welcomed over 250 members of India’s Bnei Menashe Jewish Community to move to the holy land. You can read about it here.

For examples of delicious cuisine, check out our recipes for Indian Charoset and Indian Jewish Sangria.

Who Are the Jews of India? By Nathan Katz

I would like to thank my cousin, David Goldfarb, who was the spokesman of the Israeli Embassy in Delhi from 2010 to 2013 and provided us with helpful sources. I would also like to thank Jo Cohen from the Jewish community in Calcutta. You can read her full speech here, and Sinhora Sassoon from the American Jewish Joint Distribution Committee who provided information on Bene Israelis.

Population of Jews in India Today: 5,000