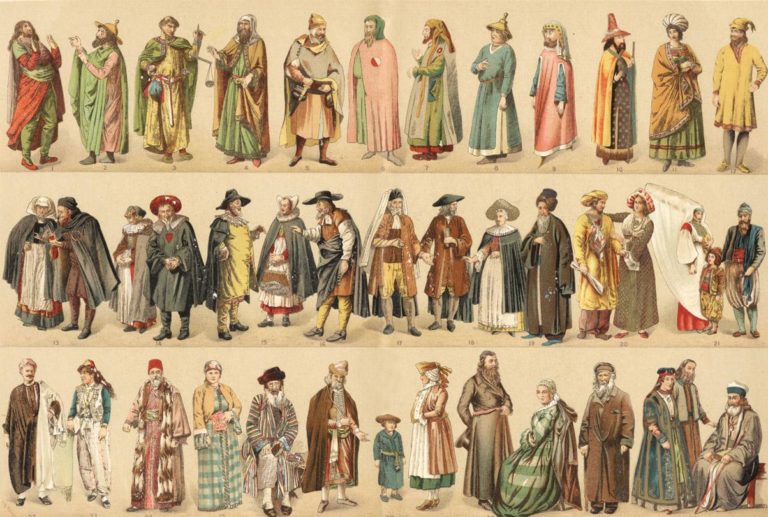 Jews began settling in the region now known as modern-day France during the Roman Period. During the 400s, Jewish immigration to these regions increased to the point where their number was large enough to be noticed by the Church. As a result, many attempts were made to convert Jewish settlers to Christianity. During the 6th century, Jewish populations were present throughout France, including: Marseilles, Arles, Paris and Bordeaux where they built several synagogues. They were primarily merchants as they were prohibited from owning land under Roman rule. During that same period, the Île de la Cité synagogue was built but later demolished and replaced with a church.

During the 800s, Jewish populations continued to exist under Charlemagne and his son, Louis de Debonnaire. Both established strict rules for the Jewish populations, while respecting their roles as merchants. Louis believed that the gradual conversion of Jews was the answer to “the jewish question.”

During the First Crusade (1096-1099), the Jewish population wasn’t a prominent target. It was during the Second Crusade (1147-1149) that the persecution of Jewish people began in earnest. French clergyman preached anti-semitic sermons and in some cities, Jews were subject to targeted rules; including an obligatory tax every Palm Sunday and having their ears boxed weekly at the cathedral for the purpose of reminding them of their “guilt”. In 1171, the first blood libel or blood accusation began. Jewish citizens were accused of killing Christian children and using their blood to make matzo. This ended violently with the burning of 31 Jews.

When King Phillip Augustus began his rule in 1180, he imprisoned every Jew living on his lands and demanded individual ransoms for their release. King Phillip continued to seize Jewish property and eventually had all Jews expelled from Paris. In 1215, the Fourth Lateran Council implemented a rule forcing all Jewish citizens in the provinces of Languedoc, Normandy and Provence to wear an identification badge. Later in 1236, Louis IX called for his crusaders to attack the Jewish communities of Anjou and Poitou. As a result, many Jews were baptized and approximately 3,000 Jewish Resistors were killed.

Despite these continuous persecutions, Jewish education thrived. With Îl-de-France and Champagne serving as epicenters for Jewish learning, studies of talmudic and biblical commentary began to spread. In addition, liturgical poetry, grammar, linguistics, philosophy and science were also studied throughout the regions. When Marranos began arriving from Portugal in the mid-1500s, they concealed their Jewish identities to ensure their safe passage to France. Marranos were considered Christianized Jews and feigned conversion to Christianity to avoid persecution.

Following the 1648 Chmielnicki massacres in the Ukraine region, large numbers of Sephardic and Ashkenazi Jews came to France. Later, during the 18th century, the open ports in Nice and Villefranche de-Conflent allowed for the free passage of jews to France. By the 1780s, many anti-semitic laws were repealed, one of them being the “Body Tax”, which classified Jews in the same category as cattle.

Did you know that French Jews Achille Fould and Isaac Cremieux were allowed to work in politics and served in the Chamber of Deputies? Jewish communities in France continued to thrive throughout the remainder of the 18th and into the 19th century, with the Rothschild and Periere families becoming reknown highly regarded financiers. Other well-known French Jews in philosophy and literature during this time included Emile Durkheim, Marcel Proust and Salomon Munk. French Jewish artists of the day include Modigliani and Chagall.

In 1923, the Federation des Societes Juif de France (FSJF) was formed to address the needs of the French Jewish community. Times were good for the French Jewish community in France until the German invasion in 1940. At this point, approximately 300,000 Jews were living in France. Following the invasion, Jewish people living in occupied zones had to register at the local police stations. This information was later forwarded to the Gestapo. In 1942, more than 1,000 Jews were deported to concentration camps in Poland and Germany. On July 16, 1942, 12,152 Jews were arrested in what was known as the Vel’ d’Hiv roundup, also known as Operation Vent Printanier (Operation Spring Breeze). Most were held in specific areas while others were sent to internment or death camps. About 25% of French Jews died in the Holocaust.

After WWII, the Jewish population in France tripled due to the influx of postwar refugees. The Jewish population in France reached 250,000 by 1951, raising hope that the strong Jewish community that played such a big part in French history could be rebuilt. In 1995, President Jacques Chirac publicly apologized for France’s role in the persecution of Jews during WWII, specifically apologizing for the role of French policemen in the Vel d’Hiv raid. In 1962 the Évian Accords was signed and French-iccupied Algeria became an independent nation. As a result, many Algerian Jews immigrated to France. Today, the population of Jews living in France has reached 600,000 while the population of French Jews who have made Aliyah to Israel has reached 200,000.

Fun Fact: Achille Fould and Isaac Cremieux were both French Jews working in politics, serving in Chamber of Deputies.