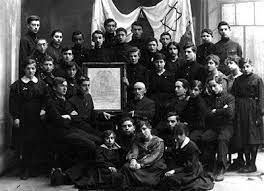 Harbin is the capital of China’s northmost province Heilongjiang. It is a city of over 6 million people that lies sandwiched between North Korea and Russia in a region sometimes called Manchuria. It is also the site of an unexpected piece of Jewish heritage. Surprisingly, Harbin is a city built by Jews

Here is the tale of Harbin and its Jewish history:

The story of the Jewish community of Harbin starts with the end of the Sino-Japanese war. As part of a secret alliance between China and Russia, in 1896 China gave Russia a land concession to build the Chinese Eastern Railway, an extension of the Trans-Siberian line. The planned railroad would cross from Manchuria all the way to Port Arthur, Korea.

The Russian government wanted to develop and populate Harbin very quickly, so they were willing to give benefits to people who moved there. Jews and other minorities took up the offer. In Russia there was poverty and rampant antisemitism. Those that moved to Harbin saw an increase in their status and were given plots of land. They weren’t allowed to work on the railroad, but they could establish other businesses.

As Harbin grew and developed Jews were able to become successful shopkeepers, contractors, and more. The lack of antisemitism amongst the native Chinese and the economic opportunities made Harbin an appealing location for Jews to relocate to. By 1903 there were 500 Jews in Harbin and they had formed their own self-governing community. That same year the first Jewish cemetery in all of China was established there.

In 1905, in the aftermath of the Russo-Japanese war of 1905 many Jewish soldiers moved to Harbin. They were joined by Jewish refugees fleeing the pogroms in Russia. By 1908 the number of Jews in Harbin had grown to 8,000.

In order to accommodate the growing population a large synagogue was opened in 1909. Additionally, a Jewish community center, hospital, and secondary school were also opened in the city. Of the 40 individuals sitting on the Harbin City Council, 12 were Jewish. 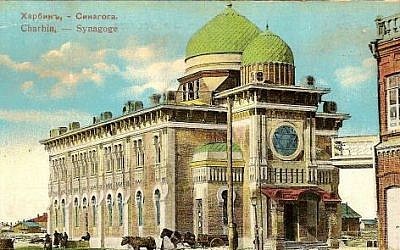 The Old Synagogue of Harbin

The Jewish community of Harbin was instrumental in establishing local industries and growing trade relations between China and Russia, Europe, Japan, and the US. Jews owned and operated restaurants, lumber mills, coal mines, banks, metalworks, breweries, and candy shops in Harbin.

During World War I the Jewish community of Harbin became a part of the Jewish Committee for the Help of War Victims. They were able to help tens of thousands of war refugees. Providing them with shelter, food, medical care, and professional education.

After World War 1, even more Jewish refugees came to Harbin. The community grew to 10,000-15,000 people. Sadly, the aftermath of the war also brought non-Jewish Russians to Harbin, many of whom harbored anti-Semitic beliefs.

Under Jewish stewardship the loose collection of villages of Harbin become a true city. In the 1920s and 1930s the Harbin became an international cultural hub. Modern hotels, shops, and cafes began to open, pioneered by the Jewish community. There were 20 different Jewish newspapers and periodicals published in Harbin. Additionally, Jewish actors and musicians from around the world traveled to perform in Harbin. The city was colloquially referred to as the Oriental St. Petersburg or the Paris of the Orient.

In 1921 the Jewish population had grown large enough that a new synagogue was constructed. In 1923, a Jewish national bank was opened. It was primarily geared towards helping Jewish businesses but was also assisted the wider Harbin community. 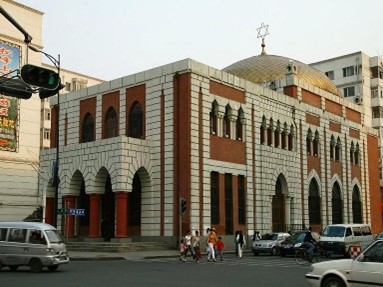 Harbin become a vibrant center for the Zionist movement. The Soviet Union outlawed Zionism, so Harbin was the perfect place for Russian language Zionism to thrive.

Unfortunately, while Harbin was developing throughout the 1920s and 1930s, there was trouble brewing. In 1928 the Chinese Eastern Railway was given over to the Chinese. The Chinese government mismanaged the railroad which caused economic crisis. Jews started to leave Harbin in the wake of this financial hardship.

In 1931, Japanese forces began to occupy swaths of China including Harbin. They established a puppet regime in the region. At the same time Russian fascists were organizing in Harbin. The fascists and the new government were happy to work together. They began to economically extort the Jews of Harbin. Those that wouldn’t or couldn’t pay were subjected to violence, kidnapping, and even murder. In response many of Harbin’s Jews fled to other countries. By 1939, the Jewish population had shrunk to only 5,000.

With the outbreak of World War 2, the Antisemitism in Harbin only grew stronger. Despite this, many Jews in Harbin kept the Zionist movement alive.

After World War 2, things did not improve for the Jews of Harbin. The Russians took control of the area in 1945 and began forcibly repatriating Russian Jews, sending them to Soviet gulags

In 1949 the Chinese Maoists took control of the region. They too continued the persecution of the jews, stripping them of rights and possessions.

In response to the ongoing hatred and persecution, Jews in Hardin emigrated in mass to Israel. In many cases the Israeli government directly aided in these moves. By 1955 there was less than 400 Jews left in Hardin. The once robust and organized Jewish community fell apart.

In 1982 there was only a single Jew left in Harbin, Anna Agre. She died in 1985 leaving the city with no Jews.

The modern Chinese government has actively preserved and promoted the history of the Jewish people in Harbin. This was done as a part of an effort to draw tourists to Harbin and to improve international relations with Israel. The synagogues and much of the beautiful architecture left behind by the Jews of Harbin still stand today, many of them refurbished. The city is studded with government placed historical plaques and markers telling the stories of the Jews that lived there.

In 2000, the Harbin Jewish Research Center was founded as a part of the Heilongjiang Academy of Social Science. In 2002 Dan Ben-Canaan, an Israeli Professor working at the academy became the first to Jew to settle in Harbin in the new century and was the sole Jew living in the city. In the same year the academy created the Sino-Israel Research and Study Center, which has formal relationships with the Hebrew University of Jerusalem and a doctoral exchange program between the schools. Dan Ben-Canaan has spent his time in Harbin working to preserve and teach its great Jewish history.

The former Israeli Prime Minister Ehud Olmert’s parents and grandparents were Jews who emigrated to Harbin from Russia. In 2005 he visited Harbin for the first time, experiencing firsthand an important part of his family history.

Harbin is home to the globally renowned Harbin International Ice and Snow Festival, the largest winter festival in the world. As part of the festivities an entire city of ice sculptures is built each year.

The oldest brewery in all of China is located in Harbin. Harbin Brewery was established in 1900 and is currently the 4th largest in China.

You can read more about the history of Jews in China here.

You can read about the experiences of Jewish refugees in China here.

You can find a recipe for Chinese style charoset here.