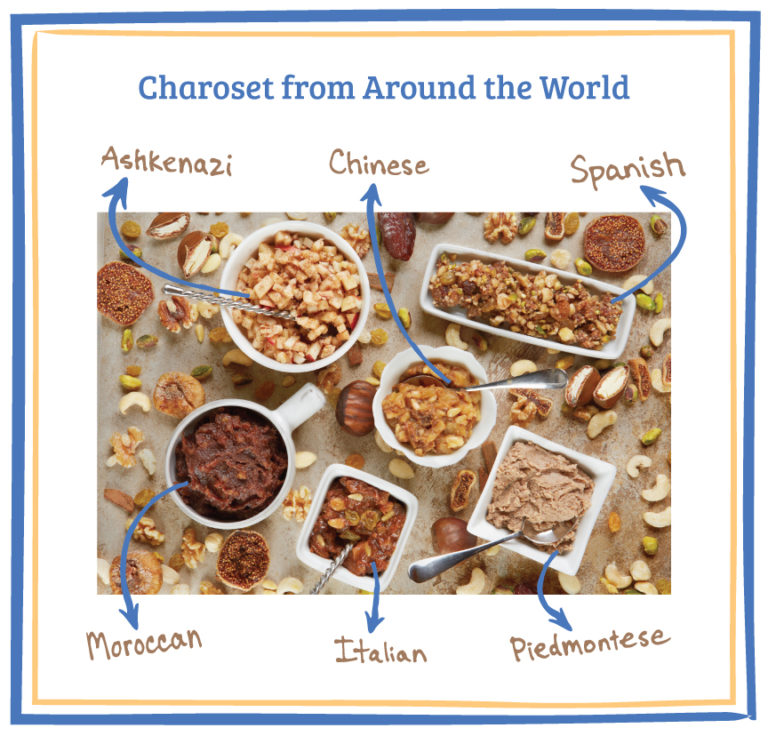 As a community and culture, Jews are resilient. Time and again, the Jewish people were forced to leave their homes, beginning with the expulsion from Jerusalem, and continuing through our history.

Again and again, a challenge forced them to start anew. Another country, another culture, another threat. Yet despite each threat and challenge, the community came together quickly and began to write another chapter in a new place. One theory is that Jewish resilience is explained by the ability to travel with the teachings of the Torah, to always be “at home” even when separated by geography from each other and the Land of Israel.

Interestingly, there is no “Israeli” recipe for Charoset. Perhaps that is because Charoset is a food of slavery, and in returning to Israel Jews are free. After all, we end every Seder: “Next year in Jerusalem.”

Charoset is always made as a sweet dish. But it is a conundrum. If Charoset is a food of slavery, representing the mortar for the bricks made by the slaves, why is it sweet? One thought is that slavery can be “sweet” because it is safe and familiar.

My goal is to celebrate the Jewish Diaspora. I want all six varieties of Charoset to represent a universal message that all the people of the world, despite different flavors, share the common quest to escape from modern day slavery and return to our Promised Land. We have been inspired and educated by the work of authors and researchers like Claudia Roden, who have studied Jewish food traditions from around the world.

Charoset tells the tale of the Jewish Diaspora. Wherever Jews landed they made the traditional Seder dish with whatever foodstuffs were local. The recipe changed but the tradition of representing the bricks and mortar of the Israelite enslavement in Egypt did not.

This is the most traditional Charoset. Its signature ingredients are apples, walnuts, cinnamon, honey and Sweet Manischewitz Wine. This is the most simple and kid friendly recipe. We make this Charoset with the young kids during our cocktail hour before we start our Seder. The young kids love getting involved.

As with all our other recipes, this Charoset relies on the local bounty of the Iberian Peninsula. Pears, pistachios, figs and hazelnuts highlight this tapas style Charoset. Vivid red and yellow linens and olive wood serving vessels transport you straight to Barcelona. We especially love the introduction of hazelnuts, pistachios, and figs into this dish.

Pine nuts, pears and almonds evoke the flavors and textures of Italian sweet and savory food. If a Jewish family, living in the Piedmont, were making a locally based Charoset, they would find all the ingredients here. It’s a beautiful dish, and like many, my family loves Italian cooking. This is my wife’s favorite Charoset recipe.

History:
The history of the Jews in Italy spans more than two thousand years. The Jewish presence in Italy dates to the pre-Christian Roman period. Despite periods of extreme persecutions and expulsions from parts from time to time, the Italian Jewish community has always been resilient and plays an important role in Italian culture. As of 2007, the estimated core Jewish population in Italy numbers around 45,000

The first documented Jews in Italy were the ambassadors sent to Rome by Judah Maccabee in 161 BCE. When the Jews were expelled from Spain in 1492, many of them found refuge in Italy, where they were given protection by King Ferdinand I of Naples.

The Northern region of Italy, the Piedmont, is surrounded on three sides by the Alps. This region is dotted with nut trees, especially chestnuts. This recipe from Piedmont for Charoset, rich with chestnuts and other nuts, brings to mind “chestnuts roasting on an open fire” whenever we think about Piedmont. Local nuts are integral ingredients in this Charoset. In our recipe, we first boil and blend the chestnuts to give a rich flavor and smooth texture.

History:
The main Jewish settlements in Piedmont began in the 15th century and consisted of Jews who escaped persecution in Eastern France. These Jews escaped a few decades after the Spanish persecutions, when in 1492 the Catholic King and Queen of Spain Ferdinand and Isabella forced all Jewish and Arab subjects to convert, flee or die on the stake.

Many Jewish families were forced to leave their homes between 1941 and 1943, and lived in the country or in the mountains until the Liberation of the North of Italy in late April 1945. They were concealed by Italian families or by groups of partisans who took the life-threatening risk of hiding Jews. Despite this, all the Piedmontese Jewish Communities lost a very high number of members in the Nazi-fascist persecutions and deportations. Some of the smaller communities never recovered and closed their Synagogues after the War. This recipe is our attempt to honor their spirit.

Dates, walnuts and cloves give this Charoset its deep color and thick consistency.
We love the delicious tangy flavor and smooth texture. It is so rich with flavor of the dates and cloves. This may be my favorite Charoset. Make extra for leftovers after the Seder!

Common ingredients in Chinese cuisine are highlighted in this version of Charoset: soy sauce, pine nuts and honey. This is a slightly savory Charoset in contrast with the other sweet options.

I used to live in Japan and work for Kikkoman Soy Sauce. I also traveled in China and studied the Fugu Plan, a Japanese rescue plan to save Jews from the Nazis by settling them in Shanghai during World War II. This Charoset recipe creates a connection between the wandering Jews of China and the Passover story.

History:
Jews arrived in Iraq, then known as Mesopotamia, as slaves beginning in 721 BC, the first of three exiles of Jews from Jerusalem. When the kingdom was conquered by the Achaemenid Persians in 539 BC, they gave Jewish people the choice to return to Judea. However, many decided to stay. Thus, the origin of Babylonian Jews.

Given my extensive travel in the Middle East, I thought that including a Charoset from Yemen to highlight the Jewish experience beyond Israel was important and interesting. We hope you will savor the combination of flavors with the dates, raisins, sesame seeds, and aromatic spices.

History:
The traditions of the Yemenite Jews are strong, dating back over 2,000 years. Some say the history of Jews in Yemen dates as far back as the time of King Solomon, while others say they arrived at the request of Bilqis, Queen of Sheba. Evidence proves that Jews were in Yemen as far back as the third century, and historians say that it was most likely trade that brought them there. In any case, Yemenite Jews formed a large community on the Arabian Peninsula.

History:
Did you know that Jews have lived in India for over 2,500 years and were the first foreign religious group to enter the country? Of all the Diaspora communities, the Jews of India are among the least known but perhaps among the most interesting. There are three major historical Jewish communities in India: Bene Israel, a 2800 year old community settled mainly in and around Mumbai; Cochin Jews, an ancient 2000 year old community whose members have mostly emigrated to Israel; and Baghdadi Jews, a 300 year old community based in Calcutta that originated from Jewish business people who came from Baghdad beginning in the 17th century.

I had the opportunity to visit the amazing Mikve Israel Emanuel Synagogue there which is the oldest continuing operating synagogue in America. While visiting, I learned about a unique type of Charoset that’s in little ball shapes and I was inspired to create a version for Breaking Matzo. As a tribute to Curaçao, we’ve added orange-flavored Curaçao liqueur to the recipe as well as coconut, a popular ingredient there. We hope you enjoy the recipe.

History:
Did you know that the oldest Jewish community in the Western Hemisphere is in Curaçao, an island north of the Venezuelan coast? Jews have been living on this island since the 1600s. While their numbers are dwindling, there is still an active Jewish community on the island today. It is also the site of the Mikve Israel-Emanuel Synagogue, the oldest continually active synagogue in the Americas.