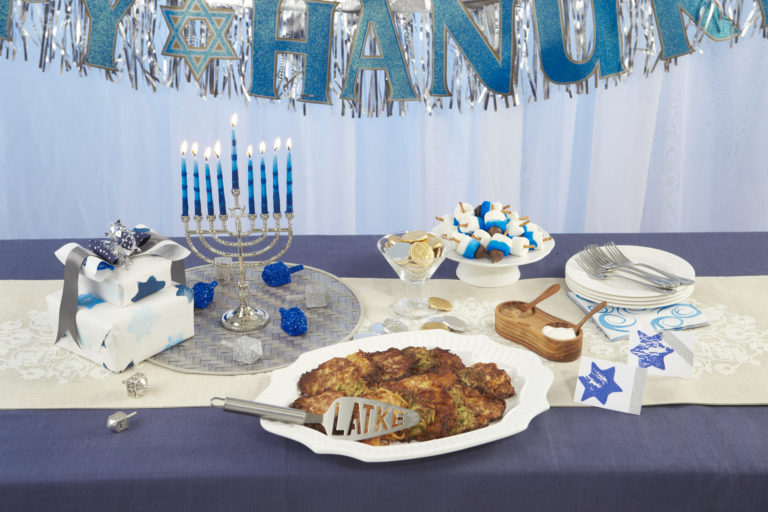 Many of us are more familiar with the symbols of the Hanukkah holiday — the Menorah, the dreidel, the latkes — than the story behind the holiday itself. Here’s a little refresher course.

Hanukkah tells the story of Judah the Maccabee leading a small Jewish army in a revolt against Antiochus and his mighty Syrian Greek forces in the year BCE 164. At that time, the Greek Empire spread over a huge territory in the Middle East, including what is now Syria, and the land of Israel. The Syrian Greeks ruled over the land of Israel and did not allow the Jews to practice their religion freely.

Mattathias, the High Priest of the Hasmoneans, led the initial revolt against the Syrian Greeks and appointed his son Judah the Maccabee (“The Hammer”) as the leader. The Maccabees were greatly outnumbered by the Greeks, who had a vastly superior number of soldiers and fought on top of warrior elephants. Judah bravely led his small army in battle and through his skill defeated the Greeks.

According to legend, because the Greeks forbade religious study, the Jews studied Torah in secret and occupied the children by playing the dreidel (spinning top) so they would keep watch and warn the adults when the Greek soldiers were coming.

After the Maccabees triumphed over the Greek army, one of the first tasks was to clean and reorder the holy Temple, which had been defiled and ruined by the Greeks. According to the Talmud, when the Maccabees prepared to light the Menorah (candelabrum) which traditionally served as an eternal light in the Temple, they could find but one small jug of oil—a supply that was enough for only a single day. They searched and searched but couldn’t find a source for more oil. Still, the Maccabees lit the Menorah and miraculously the oil lasted for eight days.

There are two major themes in the story of Hanukkah. Some rabbis emphasize the celebration of the Miracle of the Oil and how, according to the Talmud, because of the faith of the community, the oil lasted for 8 days when there was only one day of oil.

Other sages, hewing closer to the Book of Maccabees, highlight the great military victory by the underdogs, the Maccabees, over the large, well-equipped Syrian Greek Army.

We find that both aspects of the Hanukkah story resonate. The Miracle of Oil symbolizes God’s care for the Jewish people, and the Jewish faith in their God. Our pride in the Maccabee’s victory complements this theme by reminding us of the need for bold human action in the face of challenge. We celebrate the faith in God that allowed one day’s oil to burn for eight, and we honor the heroic actions of the brave men and women who rescued their fellow Jews during the Maccabean Revolt and returned home to purify the Temple.

We continue to celebrate the Hanukkah story by lighting the Menorah each night of the eight-day celebration, eating foods like latkes and donuts that are cooked in oil, and playing Dreidel and sharing Hanukkah gelt (coins) to remind us of the bravery of the heroic Maccabees.