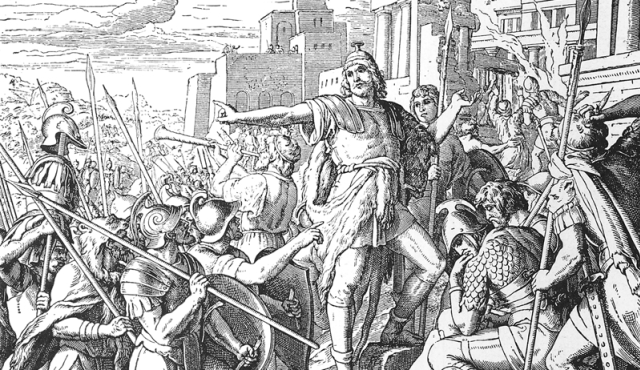 Judah the Maccabee is the central figure of the Hanukkah story. A rebel fighter who turned out to be a military genius, Judah took over leadership of the rebellion upon his father’s death, overthrowing the Syrian Greek army and restoring the Temple in Jerusalem.

Judah’s father, Mattathias, referred to in Hebrew as Mattityahu, was the high priest of the Hasmonean Family. He had five sons: Yohanan, Simon, Judah, Eliezer, and Jonathan.

The Syrian Greek regime was harsh, and tried to destroy the culture and tradition of the Jews who lived in their sphere of power. The Greeks forbade Jews to freely practice their religion, and as a final humiliation, their soldiers desecrated the Temple by slaughtering pigs, animals forbidden to Jews, on the Temple altar.

Mattathias moved his family out of Jerusalem and hid in the hills near the town of Modin. In 167 BCE, Greek soldiers came to the town and forced a Jew to slaughter a pig on an altar. This infuriated Mattathias. He killed both the Jew who slaughtered the animal and the Greek soldiers. According to the Book of Maccabee, this event sparked the Maccabean Revolt.

The Book of Maccabee tells us that many of the Jewish fighters were afraid as they faced the mighty Greek army.
– 1 Maccabees 16-23

“How can we, few as we are, fight against so great and so strong a multitude?”

In response, Judah is quoted as saying:
“It is not the size of the army that victory in battle depends, but strength comes from Heaven. They come against us in great insolence and lawlessness to destroy us… Do not be afraid of them.”

The odds were not in Judah’s favor. The Greek army, dressed in full battle gear, with superior weaponry and warrior elephants was a powerful foe for the small band of guerrilla fighters such as the Maccabees. But Judah the Maccabee (“The Hammer”) and his small army prevailed. Judah turned out to be a gifted military strategist and urged his fighters to fight for Jewish political independence even after the Greeks had conceded religious supporting the fighters.

It is important to note that it was not only the fighters who supported the Revolt. The entire Hasmonean family, all ages and all genders, engaged in the struggle for independence. Men, women and children each had a role to play.

Judah and his fellow Maccabean fighters returned to Jerusalem in victory, ready to re-dedicate the Temple in Jerusalem. They crafted a new Menorah out of iron covered in wood, because they did not have enough gold to recreate it as in earlier times. And according to the Talmud, the Maccabees only found enough oil to light the Menorah for one day, but it miraculously lasted for eight days.

In recognition of the bravery and skill of Judah and the Maccabees, the Maccabiah Games were created in 1932 as the Jewish Olympics. Five hundred Jewish athletes from twenty-three countries came to Israel to compete in the first Maccabiah Games. Held every four years in Israel, The Maccabiah has become the third largest international sporting event in the world. In the 2015 contest, over 9,000 athletes competed from 78 countries.