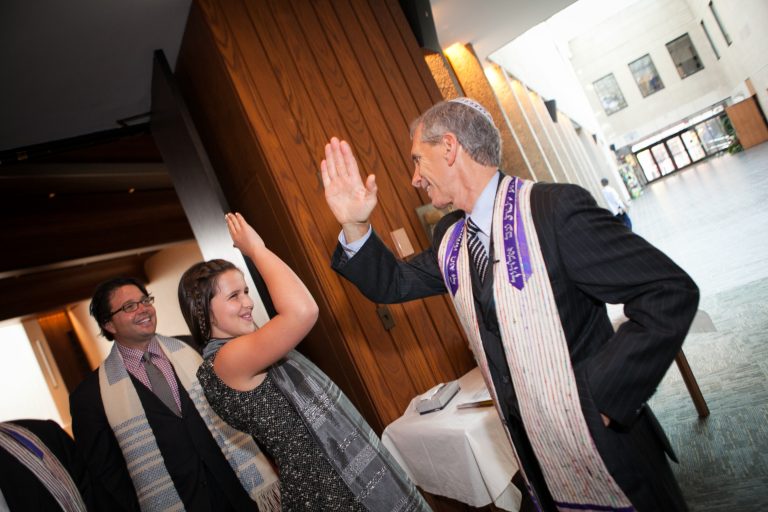 Did you know that…

The term “bar mitzvah” first appears in the Talmud, the great collection of oral Jewish teaching more than 1,200 years ago?

The bar mitzvah ceremony did not emerge as a full-fledged ritual until the late Middle Ages, with more additions made throughout the modern period.

The first bat mitzvah celebration was 95 years ago and took place in the United States when Rabbi Mordecai Kaplan (1881-1983, founder of Reconstructionist Judaism) called his daughter Judith Kaplan to the Bimah.

Reform congregations replaced bar mitzvah ceremonies in 19th-century Germany. Instead a Confirmation ceremony was held between the ages of 16-17 because rabbinic leaders felt it was a more appropriate age for this rite of passage. Today, some Reform and Conservative synagogues hold both ceremonies to mark different moments of maturation.

Inside tefillin (prayer boxes or phylacteries) are parchment scrolls inscribed with verses from the Torah. One box is worn on the head and another other on the arm; both have accompanying straps to hold them in place. One traditional observance many young people begin at bar/bat mitzvah age (or in preparation for it) is the donning of a tallit (prayer shawl) and tefillin.

At many bar/bat mitzvah celebrations, the young person is called forth for the first time to recite the blessings before and after the reading of the section of the Torah. The Hebrew term for this honor is aliyah, which literally means an “ascension” or “elevation”. This same term is also traditionally used to describe moving to the Land of Israel.

The haftarah always has a thematic link to it and traditionally follows the Torah reading on Shabbat, Jewish holidays, and fast days. It is common for a bar or bat mitzvah to chant a selection from one of the books of the prophets as part of his/her celebratory service. The word for this piece of the ritual is called the haftarah (from the Hebrew for “parting” or “taking leave,” plural haftarot).