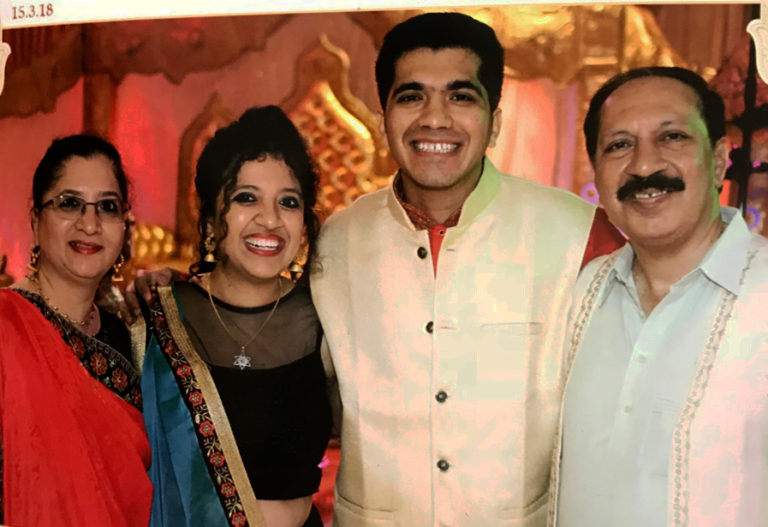 I grew up in the suburbs of Mumbai, India in Thane, about a 35-40 minute drive from the city of Mumbai. Several generations of my family have lived in Mumbai. My Dad grew up there and attended a Jewish school close to his home, while my mom grew up in a Baroda, a city in the state of Gujrat. My paternal grandpa also grew up in Mumbai, while my grandma was raised in Uganda.

When Jews first arrived in India they lived in several small villages, adopting surnames directly correlated to the name of their village, adding “kar” as a suffix. My family had the surname of “Talkar” but this changed over the generations and eventually we adopted the last name of my great granddad, “Samuel”.  Growing up, there were quite a few Jewish families in our neighborhood, but no Jewish schools, so the majority of Jewish students attended private schools. I attended an English-speaking school and English is my primary language. Our community is very close-knit. We learned about Jewish history, festivals and traditions through our families and by attending Sunday Jewish school at a nearby synagogue. Generations of my family celebrate the Jewish holidays including: Passover, Rosh Hashanah, Hanukkah and Tu BiShavat.

For Rosh Hashanah, we eat a number of foods symbolizing our prayers and hopes for a sweet new year, including: dates and pomegranates; black-eyed peas, leeks, beets, and gourds – all boiled with sugar added; head of lamb prepared with a ginger garlic paste and turmeric then boiled; as well as grilled pomfret (a fish) marinated in ginger garlic paste and grilled with red chilli powder and turmeric. At the Tu BiShvat Seder, celebrating the New Year of the Trees, we eat fruit of all kinds and recite a blessing for each fruit. We keep Passover for all 8 days and on the final day have a feast with our entire family. My mother prepares homemade matzo for the Passover hamotzi​ which is placed on our Seder plate.  My father oversees the grinding machine that grinds the wheat my mother will use to make the matzo, to be sure it is kosher for Pesach.  We keep three homemade matzos on the Seder tray. Each one represents our forefathers; Abraham, Isaac and Jacob. For the other days of Passover, we get round, Baghdadi-style matzo from the Magen David Synagogue in Mumbai which has prepared and provided matzo to local Jewish families, including the Samuels, for generations. 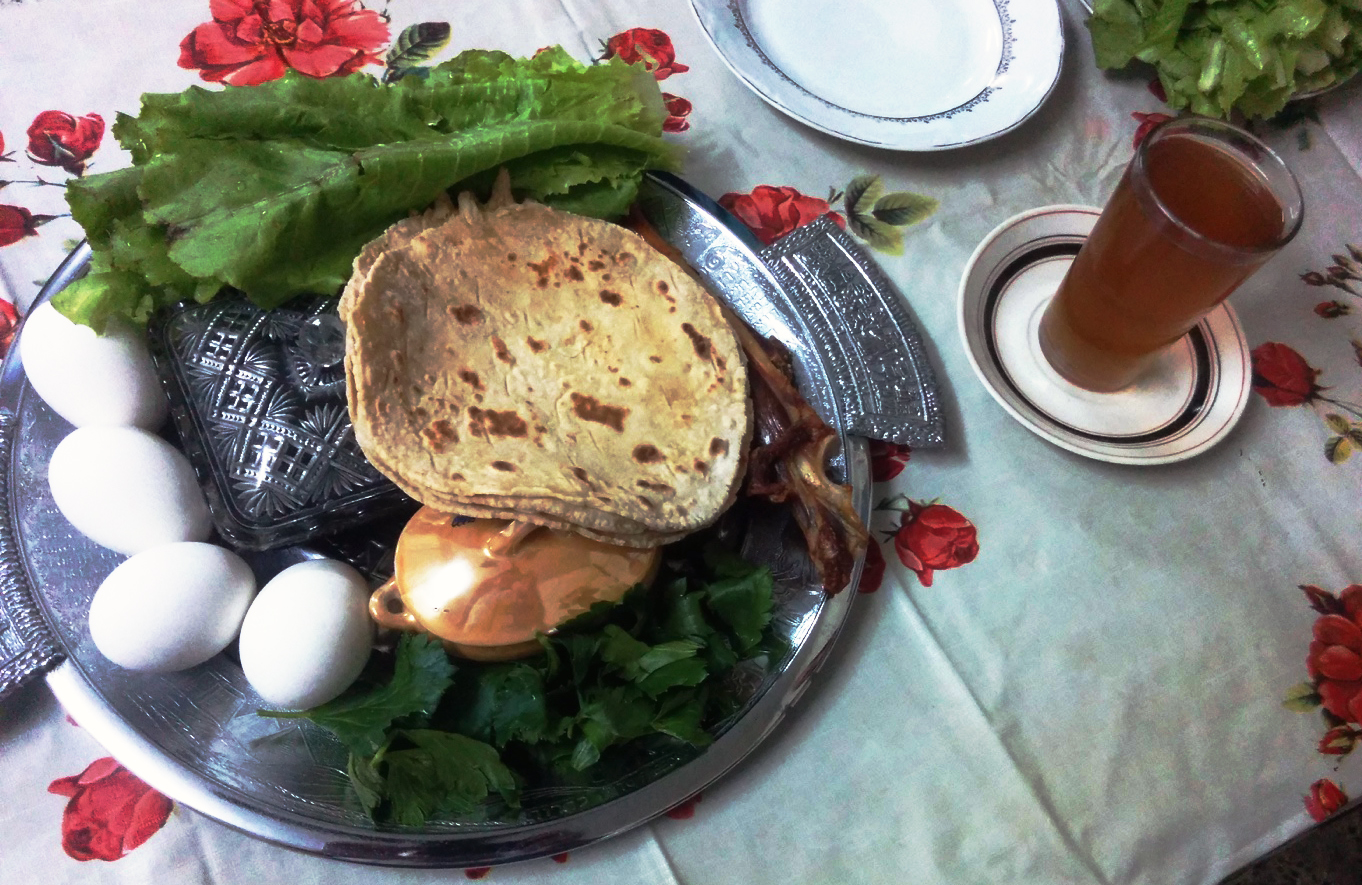 The Samuel family Passover Seder plate. Rather than small portions of the six representative foods, Jews in India place several servings of each on the Seder plate. Three homemade matzo are placed on the plate representing the forefathers; Abraham, Isaac and Jacob. 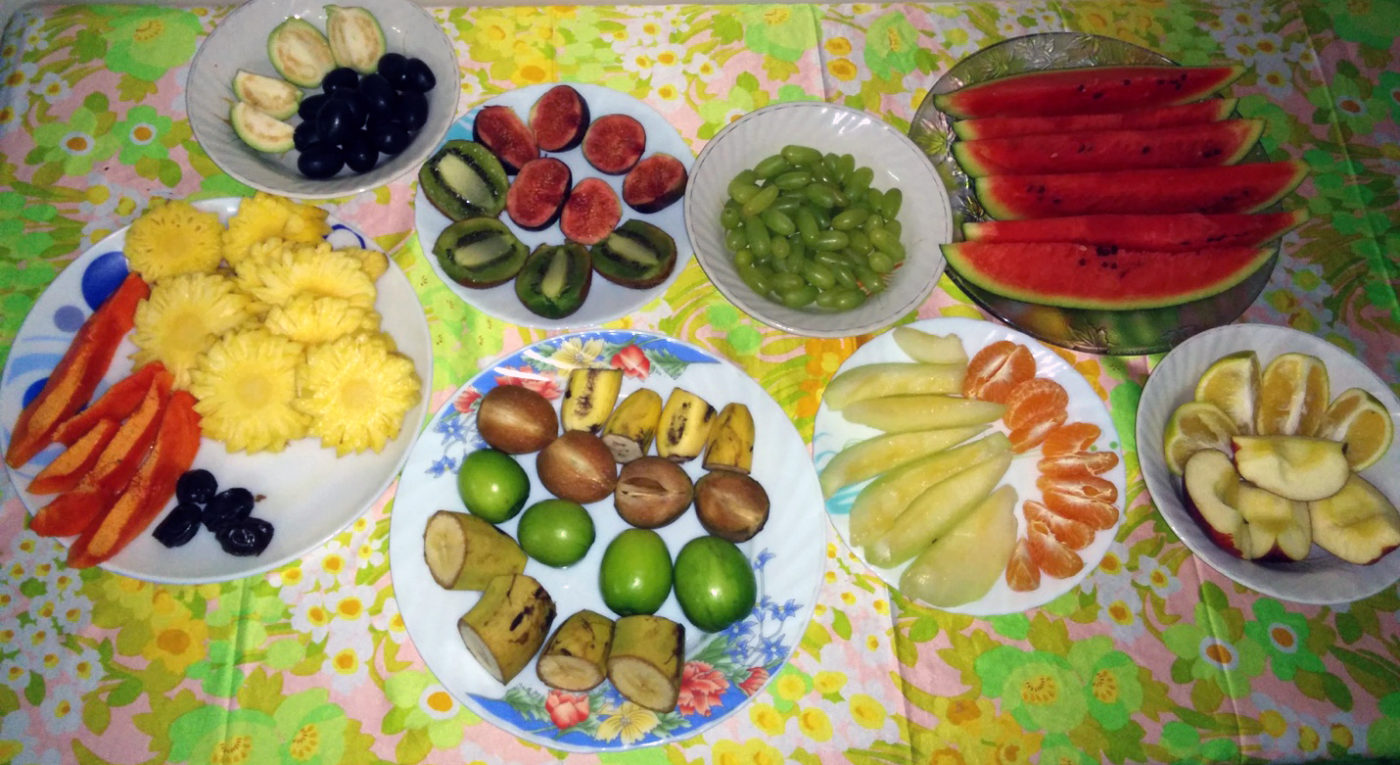 Over the years, some families in our neighborhood moved to Israel while others moved to the nearby city of Mumbai and its suburbs. So while there are more Jewish families in the city, there are fewer in the country overall. Today, there are fewer than 4,500 Jews in Mumbai with about 10 synagogues in and around Mumbai. The closest temple to my family is Shaar Hashamaim Synagogue in Thane. It is a 10-minute walk to temple for festivals and Friday night Shabbat services. During Simach Torah (marking the conclusion of the annual cycle of Torah readings and the beginning of a new cycle), we typically visit several synagogues, chiefly those which family members attended in the past. We may visit up to 5 synagogues that night, enjoying the Simach Torah festival and celebrating with members of our community. For Rosh Hashanah, we travel to Mumbai for Tashlik prayers where my family has been going for several generations.

Approximately 2,500 years ago, a handful of Jewish refugees survived a shipwreck off the coast off India and are said to be the original members of the Bene Israel. Though their Jewish holy books were lost in the wreck, their Jewish identity remained intact and was handed down through the years. Today, congregations of the area synagogues are big, and we always have a minyan for services during the week, Shabbos, and festivals.  We enjoy many of the typical Jewish rituals including Bar Mitzvahs. I had a Bar Mitzvah and it was very similar to Bar Mitzvahs held in the U.S. We read a Torah portion and we are typically provided Tefillin and Tzitzit by our grandparents. That same day or evening, or the following weekend, we have a large party and conduct the traditional candle lighting ceremony lighting 13 candles. Relatives are invited to light the first 12 and the 13th is lit with the immediate family. Jewish girls in India do have Bat Mitzvahs, as did my older sister, but I am not sure this happens in all families. 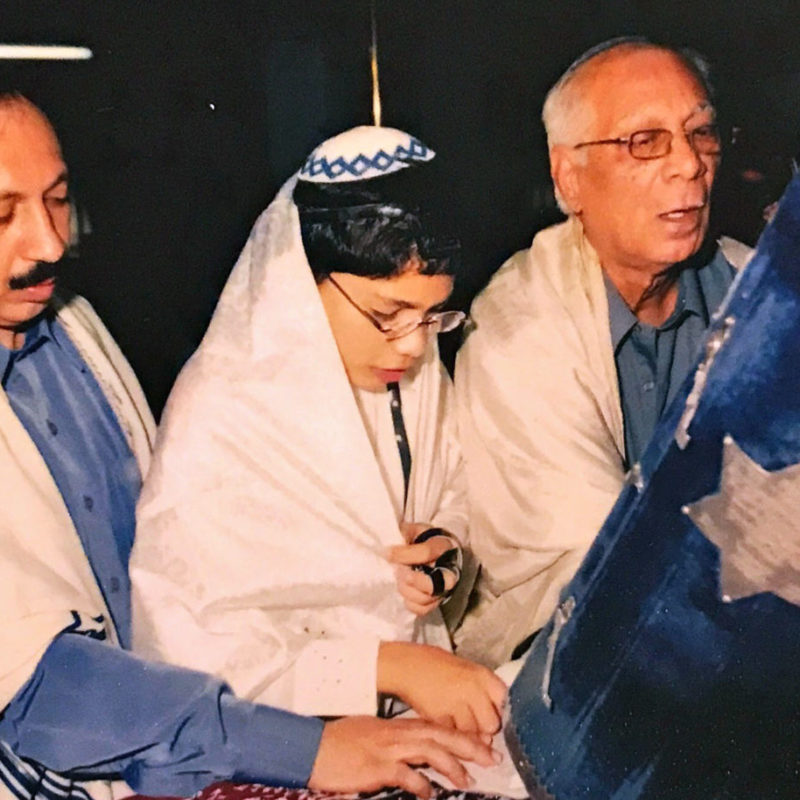 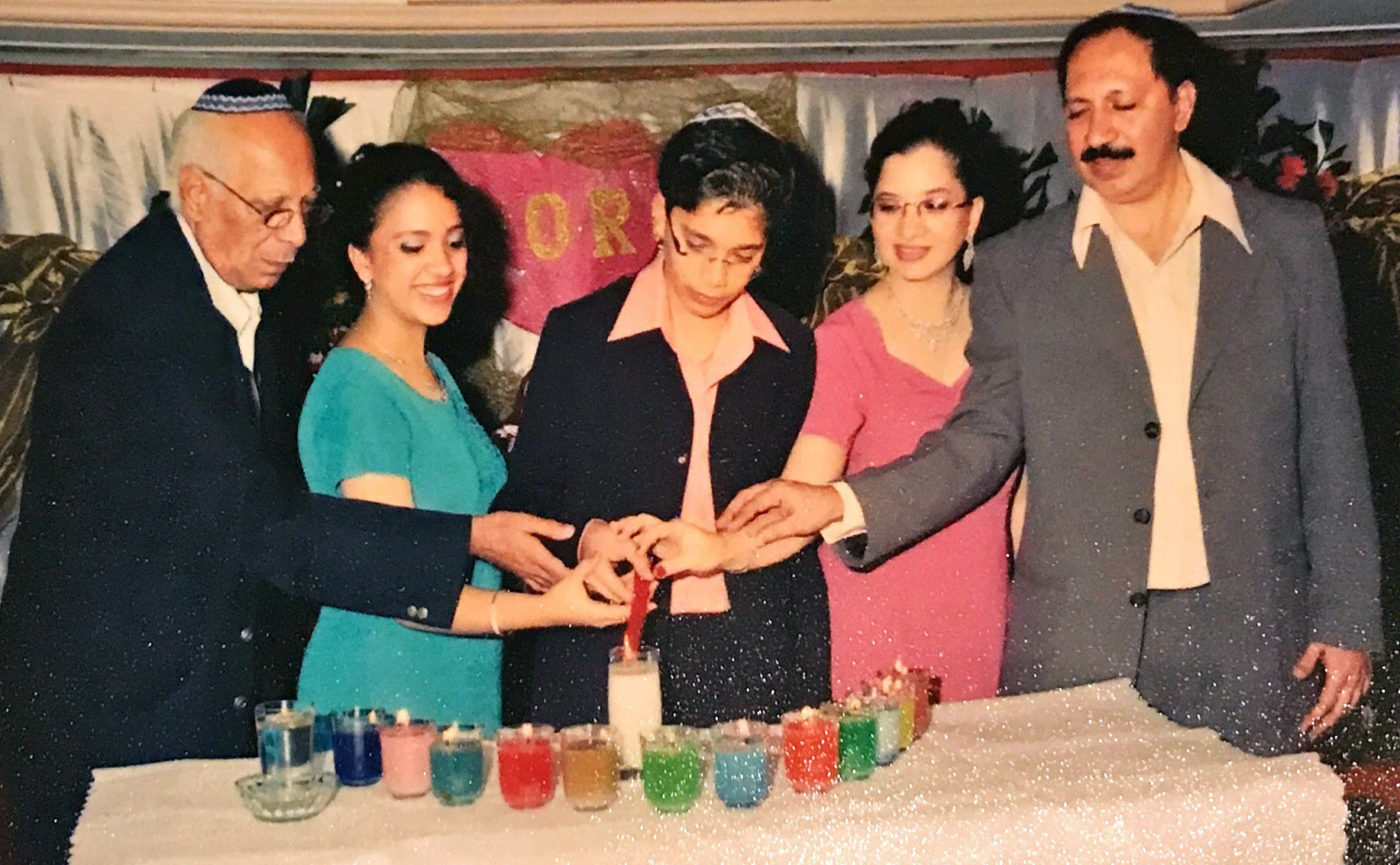 Growing up as a Jew in the Hindu majority of India wasn’t particularly difficult but when meeting new people and talking about religion, I typically had to explain how Jews came to live in India. It’s the same here in the U.S. when I explain to people that there are indeed Jews in India.

As Jews in India we assimilated over the centuries, embracing many facets of Indian culture. One particular challenge of being Jewish in India is keeping kosher. There aren’t any kosher certified restaurants in or around Mumbai, so when dining out, many people typically select a vegetarian restaurant or a restaurant whose kitchens have dedicated utensils for vegetarian and non-vegetarian foods. A friend’s dad slaughtered meat, so we would to get meat from him for Shabbos and festivals. As you may know, Indian cuisine involves a lot of spices and curry, so daily meals typically include: lentils, vegetables and pulses (dried seeds of legume plants) which are served with rice, roti (a flatbread made form wholemeal flour), or naan. For our weekly Shabbos meal we typically enjoy meat or chicken curry with rice and salad. On special occasions or holidays, we also have Biryani, a layered rice with curry and fried dry fruits. For Passover we create our own spice mixtures, keeping kosher restrictions in mind. And during Hanukkah, we have sweets everyday like others all around the world.

Following the rules of Shabbos can also be difficult. People in India work 5 ½ days per week, including Saturdays, making it difficult for Jews during Shabbos. In addition, many high schools and universities hold exams on Saturdays. You can request an alternate day, but it isn’t always allowed – at least not when I was in school. So, you had to take your exam on Saturday or risk failing the class. The work week has evolved over the years, with the majority of people working alternate Saturdays in place of every Saturday. This makes it a bit easier for us to keep the Sabbath.

One thing I love about being a Jew in India is how unique it makes me! I’ve had opportunities to meet Jews from around the world. I attended a camp in Hungary where I met Jews from Russia, Poland, Israel, Turkey, and the Czech Republic. I also met Jews from Canada and Australia when they visited India. Now that I am attending college in the U.S., I am meeting many Jewish people from communities in many different cities. Each one of us has their own way of keeping their traditions; reflective of the country and families in which we’ve been raised.

Throughout my travels, I’ve observed that every Jewish community has its own way of praying. A few follow tunes when praying while others keep it simple. I believe the Jews in India follow the Sephardic traditions as they don’t align with that I have been experiencing here in the U.S. which seem to be largely Ashkenazi traditions. For those not familiar, Jews in Mumbai and Gujrat are known as Bene Israeli Jews. The Jews in India believe strongly in Prophet Elijah and whenever we have a happy occasion or celebration, like Britmila (male circumcision ritual), we sing a song to praise him. We then serve a dish of flat rice with sugar, ground coconut and several dried fruits.

Marriage ceremonies for Jews in India are quite interesting as we’ve adopted a few traditions from the Indian culture. We have a henna day where both bride and the groom have an intricate pattern of henna drawn on their index fingers. The bride also has henna designs covering her hands and arms up to the elbows. Both of them wear traditional Indian dress, Saris or Chaniya Choli. The wedding ceremony typically takes place at a synagogue rather than having a chuppah on a terrace or lawn which is done frequently in Israel and the U.S. 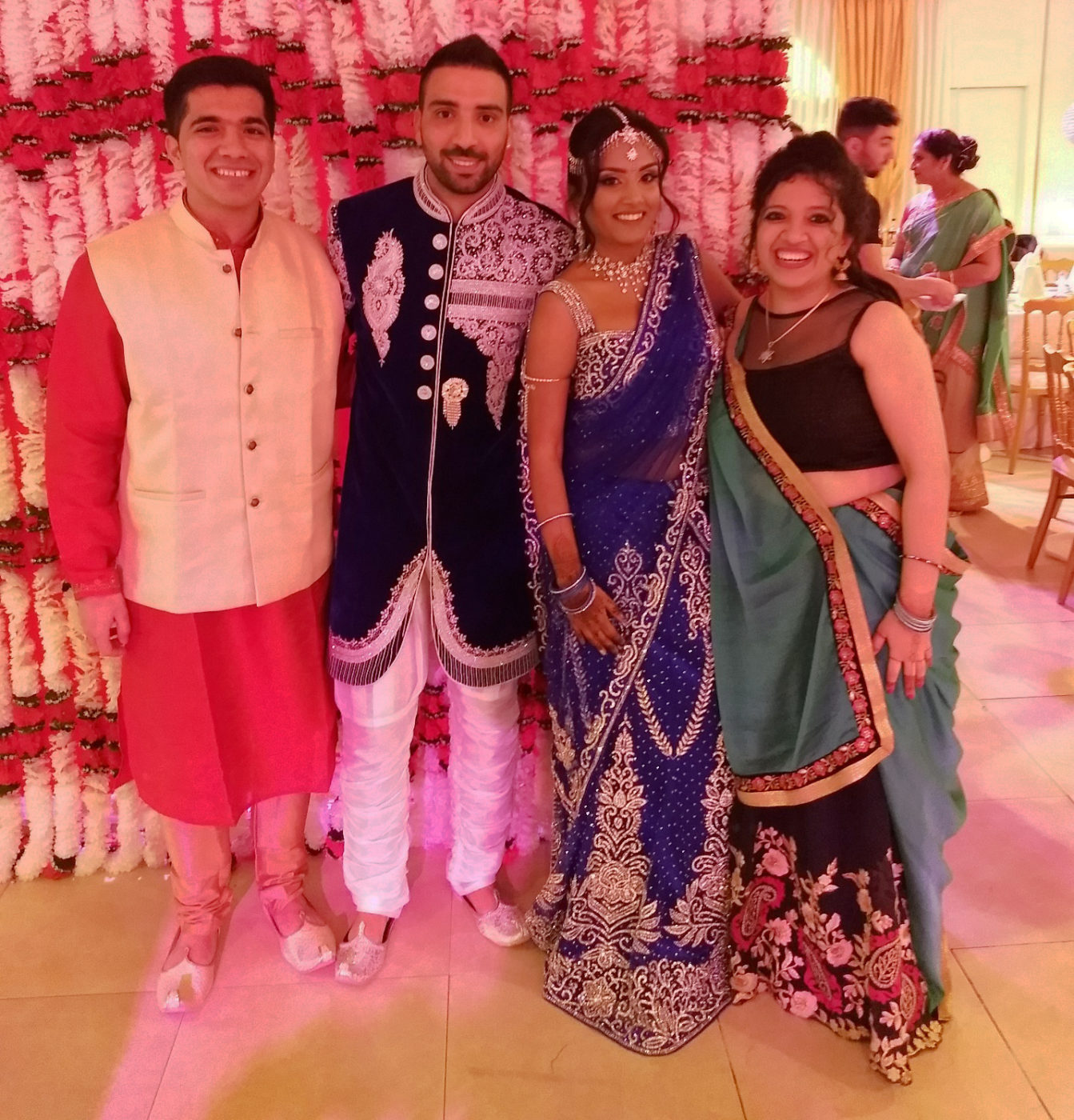 As with other Jewish communities worldwide, the Jewish community in India strongly believes in giving back. Hoping to pass on this tradition, my sister and I taught at the Sunday Jewish school for kids ages 5-12 years. I was also involved in planning several sessions on Judaism for several youth camps (ages 18-27). I was also a member of the JCC in Mumbai and was president of the youth wing for a year, introducing several events which have become quite popular over the years. 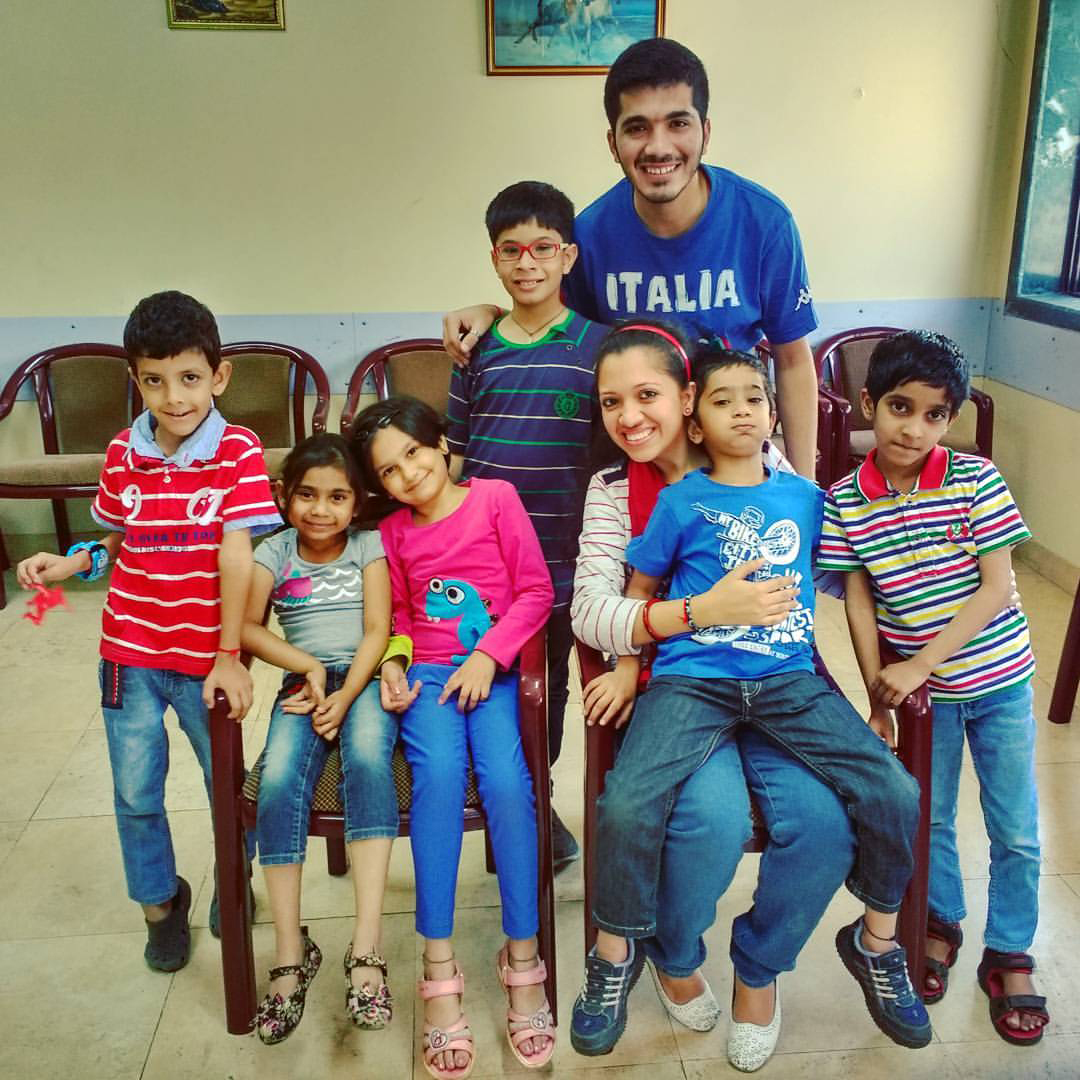 Giving Back. Doron and his sister, Osrah Samuel, taught the younger generations at the local Jewish Sunday school.

I’ve found the Jewish community here in the U.S. very welcoming and I am spending the summer in a predominantly Jewish neighborhood while continuing my education. I’ve been invited to and enjoyed many Shabbos meals with a number of families and friends. Corned beef and cholent are a couple of my new favorites! At home, I usually cook Indian cuisine but am always asking for recipes from the families and friends I’ve met along with way.

After moving to U.S., it was difficult for many to believe that I was Jewish and from India. There were many questions – several of which I hope I’ve answered here! I hope I’ve helped you and others around the world get to know the Jews from India.

Doron is currently pursuing a Masters of Computer Science with a specialization in Cybersecurity at Pace University in New York. His parents still reside in Mumbai, India.