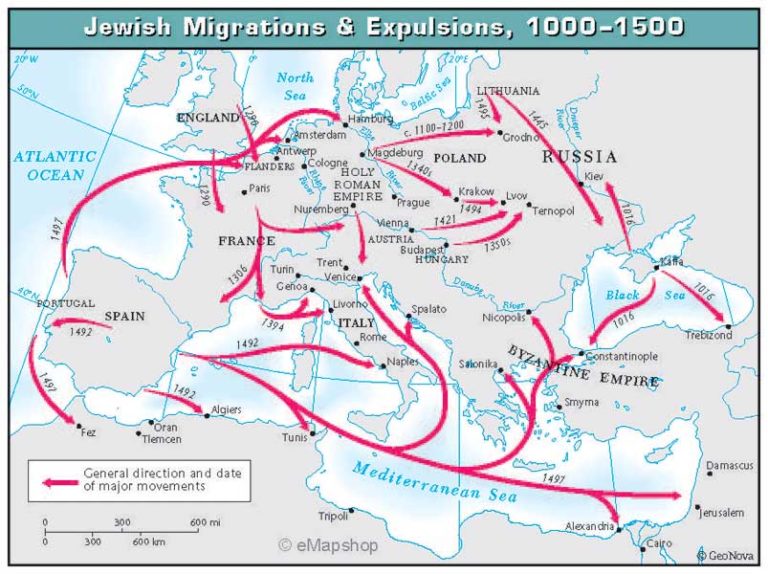 Jews who ended up in Modern Europe, Eastern Europe and Central Europe are called the Ashkenazi. They created communities from England to Russia, including Poland, Germany, France, Austria and Hungary, moving from place to place as persecution and politics required.

Around the start of the second millennium, Spain became a great center of Jewish life and learning, and the Jewish community flourished in Southern Spain and Portugal for centuries. When the Spanish Inquisition forced Jews to leave, many Jews left Spain for Italy and the Ottoman Empire including modern day Turkey, Greece, Morocco, Iran and Iraq. These Jews are called Sephardim.

The Sephardim developed distinctive characteristics that would sustain them through the Diaspora. They even developed their own language, Ladino, written with Hebrew characters, but with words and grammar that come from Spanish.

After the expulsion from Spain, the Sephardim fled, allover the world. They were ultimately welcomed, or at least accepted by the Ottoman Turkish Empire and established longstanding communities in Turkey, Greece, Morocco, Iraq, Iran, and beyond.

Today, in addition to those Jews who originated in Spain, the term Sephardim has come to refer to traditionally Eastern Jewish communities of West Asia and beyond. Though they do not having genealogical roots in the Jewish communities of Iberia, they have adopted a Sephardic style of liturgy and Sephardic law and customs imparted to them by the Iberian Jewish exiles over the course of the last few centuries.