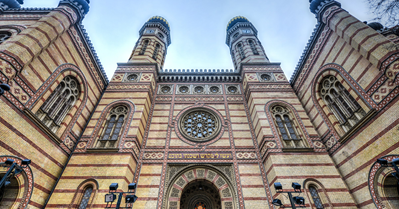 Throughout the world, there are a variety of synagogues with unique, impressive, and incredible features. Such synagogues include the Mikve Israel Emanuel Synagogue on the island of Curaçao and the Great Synagogue of Rome. I’d like to talk about another magnificent synagogue still operating today: The Dohány Street Synagogue in Budapest. The building itself is an architectural feat, but equally important is its history.

Dohány Street Synagogue, is also known as The Great Synagogue, the Tabakgasse Synagogue, and the Tabac-Schul. It is one of the largest synagogues in the world and is the largest in Europe. The synagogue can hold nearly 3,000 people at a time. Its most iconic feature are two large towers each topped with a large onion dome. 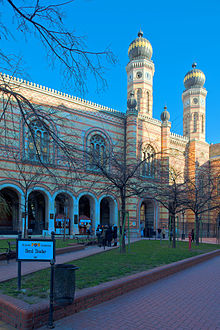 The Jewish community of the city of Pest began construction on the synagogue in 1854. It was built in the Moorish-Revival style according to plans drafted by the architect Ludwig Förster. On September 6th, 1859 the synagogue was consecrated. Famed composer and musician Franz Liszt played the organ during the ceremony. In 1873 the cities of Buda, Óbuda and Pest merged to form the current city of Budapest. The synagogue served as a focal point for Judaism in the newly created city.

On February 3rd of 1939 the far-right Hungarian nationalist Arrow Cross Party bombed the synagogue. Hungary was part of the axis powers during World War ll, passing a variety of anti-Jewish laws inspired by the Germans. However, as the war rolled on the Germans keep demanding more from their Hungarian allies.

On March 23rd, 1944 the Germans invaded Hungary and installed a pro-German anti-Semitic government. During this period the Jewish population of Budapest was forced into a Ghetto abutting the synagogue. The Dohány Street Synagogue itself was claimed by the Nazis under Adolph Eichmann. The synagogue served a variety of war time purposes including being used as a radio base and stable. It was also used as a central point from which thousands of Jews were gathered to be taken to concentration camps. Nearly half a million Hungarian Jews were deported to concentration camps, approximately 90% of them were immediately sent to Auschwitz.

On December 26th, 1944 the Soviet Union’s forces surrounded Budapest and began a 50-day siege. During this battle the synagogue suffered heavy damage from allied air raids. On February 13th, 1945 the city of Budapest surrendered.

In the wake of World War ll the Soviet Union occupied Hungary. Under Soviet stewardship a communist regime was put into place. Hungary would remain under communist rule until the foundation of the Third Republic in 1989. During this time the Jewish community of Budapest began worshipping in the Dohány Street Synagogue again, though the damage to the building was not repaired.

The first free elections were held in 1990 and that same year the Soviet Union withdrew all of the 100,000 troops still stationed there. Under the new government, efforts to repair and restore the synagogue began. The project was funded by both the Hungarian government and private donors. The renovation of the synagogue was completed in 1998. Services are still held in the synagogue today. Furthermore, it has become a major tourist attraction for Jews and non-Jews alike. 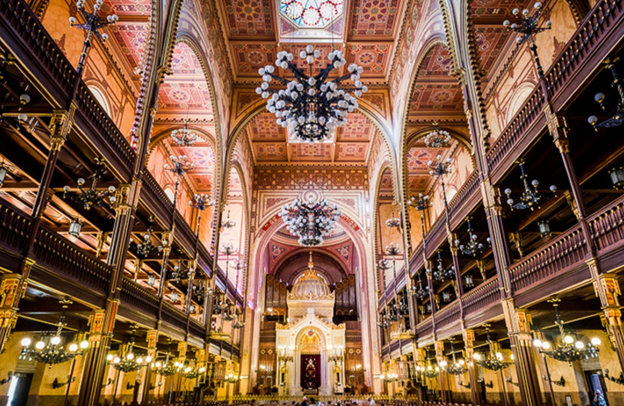 Over time additional related structures were built around the temple, forming a synagogue complex. The Hungarian Jewish Museums and Archives was built in 1930 where famed author and father of Zionism Theodor Herzl lived. It holds a wide range of Jewish artifacts and written documents. In 1931 an additional smaller temple was constructed. It was named the heroes’ temple in honor of Jewish Hungarians who died fighting during World War l. A Jewish cemetery was constructed next to the synagogue in 1944. The cemetery was built to house those that died of hunger and cold in the ghetto. Finally, there is the Raoul Wallenberg Holocaust Memorial Park which has a variety of monuments including one honoring the over 400,000 Hungarians Jews that died during the holocaust.

The history of the Dohány Street Synagogue is a reminder that no matter how dark things get, light will always triumph. The synagogue was built as a place of faith and joy. There were times when tragedy and terror took hold, but today it a place of joy once more, stronger than it ever was before.

Fun Fact: Dohány is the Hungarian word for tobacco.

Fun Fact: The Dohány Street Synagogue’s reopening ceremony in 1996 was a huge affair attended by former Israeli prime minister Yitzhak Shamir and the sitting Hungarian president. You can read about the grand reopening here.

Photos of the Dohány Street Synagogue throughout its history can be found here.

You can read more about the history of Hungarian Jews during World War ll here.

Theodor Herzl was a journalist and playwright who is considered the founding father of modern Zionism. He was born in the city of Pest. You can read more about him here.

Raoul Wallenberg was a Swedish diplomat who worked to save the lives of tens of thousands of Jews living in Nazi occupied Hungary. You can read more about his life here.