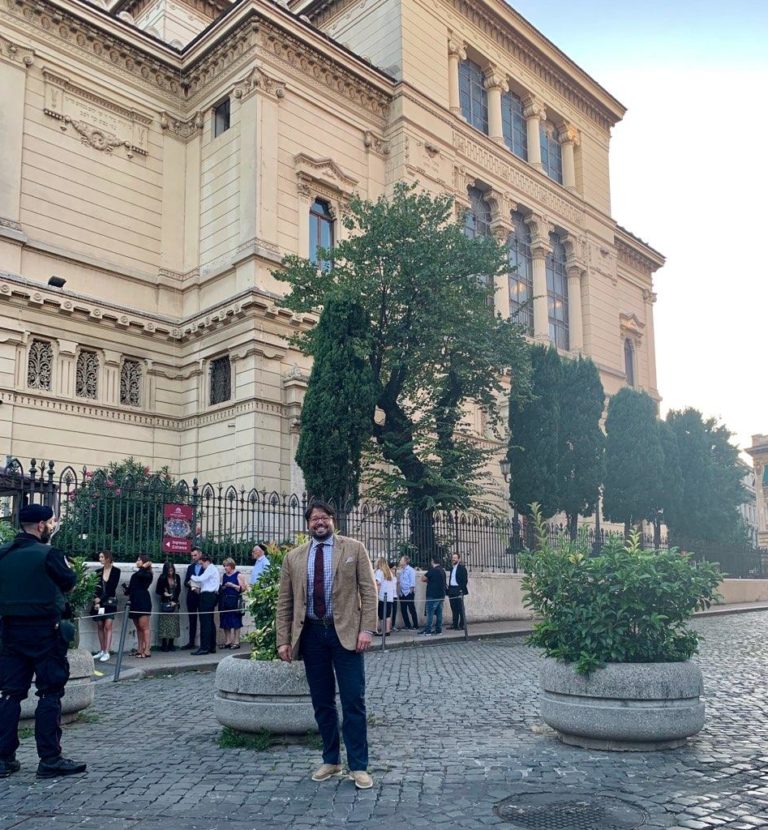 Andy at The Great Synagogue of Rome in September, 2019

What is your example of a modern Maccabee? Someone who rededicated something or themselves to faith?

In September 2019, I attended Rosh Hashanah services at the Great Synagogue of Rome. While I had intended to celebrate the Jewish New Year, I was surprised to find a Hanukkah connection by discovering the tradition of rededication – an important Hanukkah theme.

I was fascinated to learn that Lt Charles Aaron Golub, a soldier from Worcester, Massachusetts, had taken part in the rededication of The Great Synagogue of Rome in 1944.

Here is the background on this great story:

In the year 164 BCE the Greek empire took over modern day Syria and the land of Israel. The Greeks forbade the Jews from freely practicing their religion. They shuttered the temple and defiled the holy site. The high priest of the Hasmoneans in the town of Modin (Click here for a map showing were Modin and other sites from the story of Hanukkah are located), Mattathias, started a revolt against the oppressive Syrian Greeks. Mattathias appointed his son Judah the Maccabee as the leader of this rebellion (For more about Judah the Maccabee, read our blog about his story). The Maccabees were greatly outnumbered, but through bravery, cunning and tactical brilliance, Judah and his Maccabean men successfully defeated the Greeks.

Emerging triumphant from battle, the Maccabees immediately turned their attention to the holy Temple. They cleaned, reordered and restored the desecrated temple. It was there that the miracle of oil occurred in which what should have only been enough oil for one night lasted for 8 days. The Maccabees are celebrated not only for their physical and tactical prowess, but also for their hard work and dedication in maintaining the Temple.

The legacy of the Maccabees continues today. Their story is more than just the basis for the holiday of Hanukkah, it is an inspiration, a set of deeds to judge us by and a host of ideals to strive for. Throughout history there have been brave Jews that embody the same ideals of Judah Maccabee and his men. They can be called Modern Maccabees, each fighting their own battle in the spirit of Judaism.

In particular, the Maccabees’ military victory and repair of the temple resonates with a modern example, the rededication of the The Great Synagogue of Rome.

Rome has one of the oldest continuous Jewish communities in the world. There have been Jews living in Rome since 586 BCE. Throughout this time there have been ups and downs, with many periods of heavy anti-Semitism. In 1555, Jews were officially labeled as less than citizens and forced to live in walled-off ghettos. When Italy was unified in 1870, the walls around the ghettos were torn down and Jews were given full rights as citizens of the Italian Republic. The Jewish community decided to construct a new and larger synagogue in celebration of their newly-earned rights. In 1904 the Great Synagogue of Rome was completed. It was the tallest of all of Rome’s synagogues and was the central place of Jewish worship 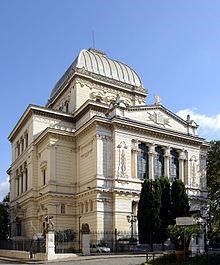 The Great Synagogue of Rome

In 1938 under the rule of fascist prime minister Benito Mussolini, new laws were implemented that once again stripped Jews of their rights as citizens. In July of 1943, many Italians had grown frustrated with the war and Mussolini was forced out of office and arrested. The German forces rescued Mussolini and helped him rally a puppet state of Italian fascists. Meanwhile, the Italian government was preparing to surrender and join the allied forces. On September 8, 1943, Italy’s unconditional surrender was announced. In response, German forces alongside Italian Fascists captured Rome.

Life for the Jews in the occupied city grew worse than under Mussolini’s regime. On September 16, 1943, the Nazis demanded that the Jewish community pay them a ransom of 110 pounds of gold, or they would kill 200 Jews. The Jews of Rome paid the gold but that did little to placate the Germans. On October 13th of that year, the Nazis seized the Great Synagogue of Rome, looted it and had it officially shut down. Three days later, on October 16th, more than 1,000 Jews were arrested and transported to Auschwitz. Only 16 of the Roman Jews would return from the concentration camp.

On June 4th of 1944, the Allies, led by American military forces, liberated Rome from the Nazis and Fascists. The Allies were greeted by grateful and joyous Romans both Jewish and non-Jewish alike. The people of Rome had suffered loss, hunger, pain and tragedy, but the American soldiers brought them hope.

Had the American and Allied forces simply liberated Rome it would have been enough, however they did far more than that. Just like the Maccabees of old celebrated their military triumph by rebuilding the Temple, American soldiers many of whom were Jewish turned their attention to the Great Synagogue of Rome.

Soon after liberating the city, the American forces reopened The Great Synagogue and aided in the efforts to clean and restore the temple. Jewish American Chaplains Lt. Morris Kertzer and Aaron Paperman helped to gather Rome’s Jewish community and bring them to the re-opened temple. On Friday June 9th, 1944, the first services were held in the restored synagogue. Thousands of people came to worship and to mourn. American Jewish soldiers joined the remaining Jews of Rome for the service which was co-led by Lt. Kertzer. Private Charles Aaron Golub, a Worcester MA native, attended this service and was called upon to say a blessing. He described it as an incredibly moving experience and noted how grateful the Roman Jews were both for their freedom and the help they had received in the reopening of the synagogue.

The Story of the Great Synagogue of Rome is a spark of light in a dark chapter of Jewish history. It shows that in spite of the overwhelming challenges and tragic circumstances, Jews have demonstrated great resilience, never losing faith or hope. During the Holocaust, some Jews lit the Hanukkah Menorah in concentration camps (You can read more about this here). The legacy of what happened in Rome has touched thousands of lives and its legacy can still be felt today.

I had the honor of attending Rosh Hashanah services at the Great Synagogue in 2019.  It was a powerful, spiritual and deeply moving experience. Sitting in the synagogue’s pews during the holiday services, you can truly feel the breadth and weight of history. 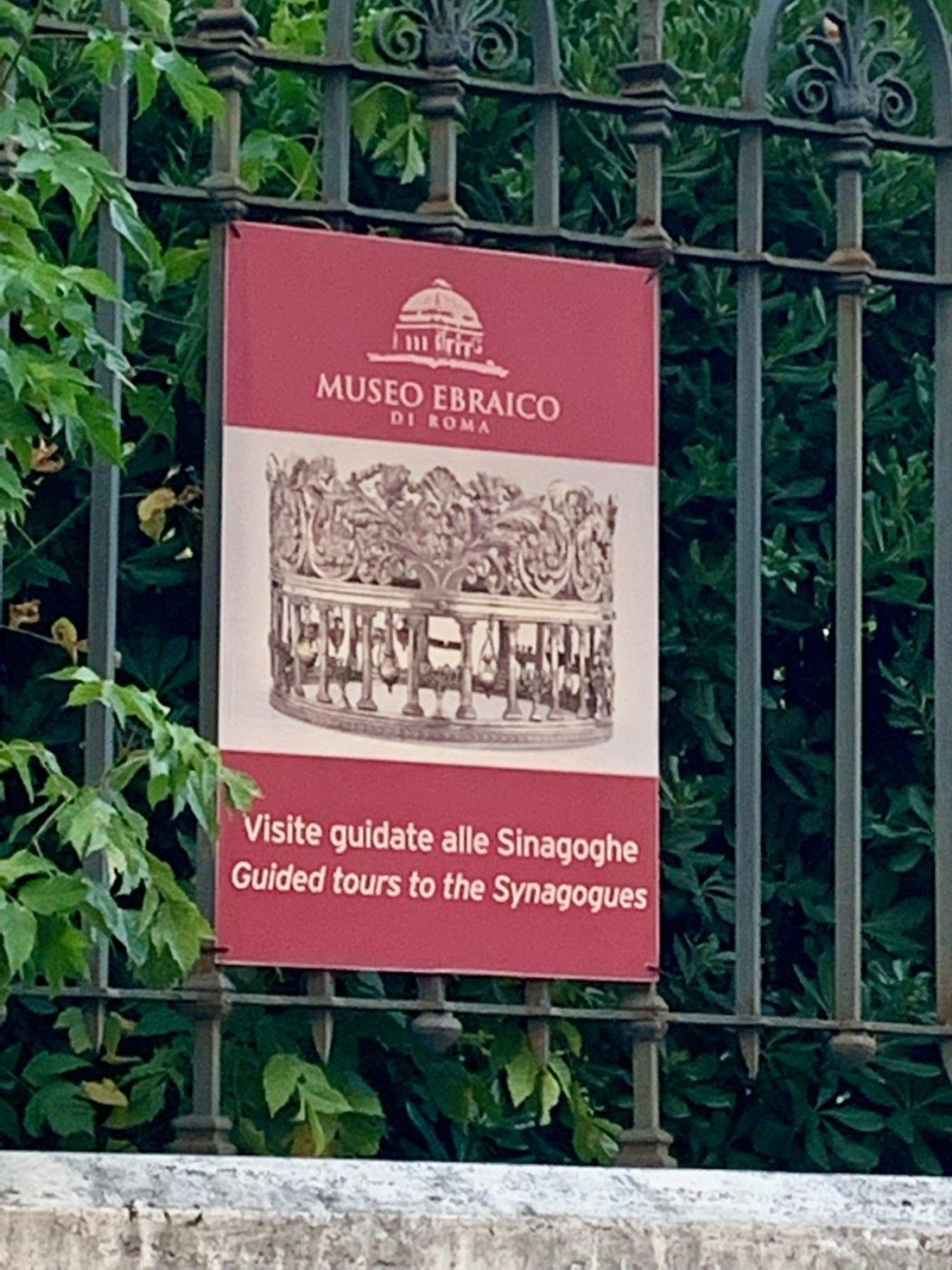 Signage for The Synagogue of Rome

Sites like the Great Synagogue must be preserved and cherished, but the stories about the brave men and women who have helped to keep them standing must too be preserved. The rededication of the great synagogue of Rome is a powerful story about brave men and women who have continued the Maccabee tradition of persevering our Jewish faith and rededication.

For further reading on the role of American soldiers in restoring synagogues after World War 2, check out the National Museum of American Jewish Military History’s article on the subject. It features the stories of:

For more about Lt. Morris Kertzer check out this article about his life and legacy.

For additional information on the history of Jews in Rome, read here.

On February 12th, 2020 Five Jewish Americans soldiers buried in the Philippines during World War II had the Star of David added to their headstones. You can read more about it here.

Appendix: Andy’s family is a military family. His dad, Dr Harold J Goldfarb was a Captain, U.S. Army MC (Medical Corps) in the 82nd Airborne Division at Fort Bragg, North Carolina (where Andy was born in 1968). 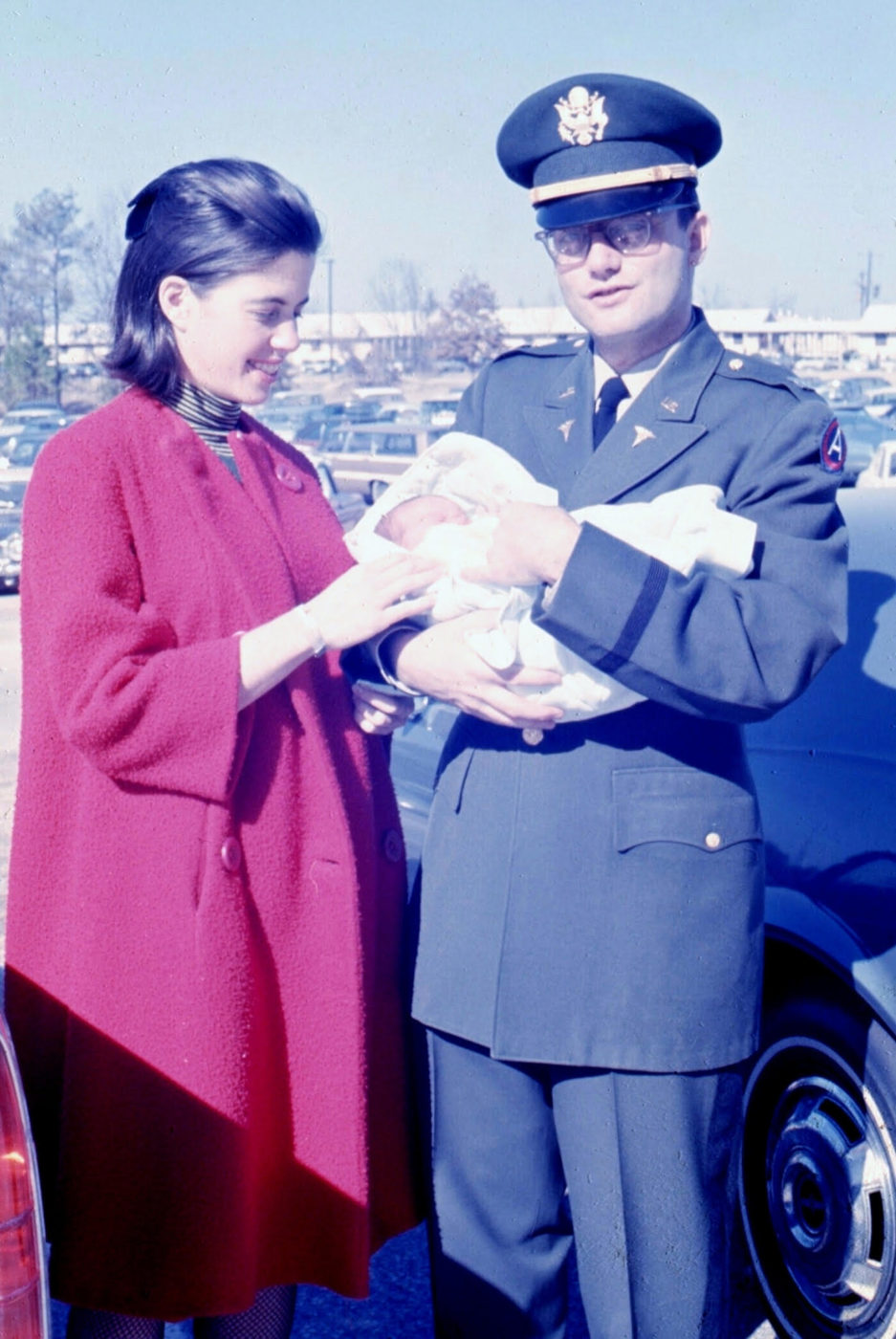 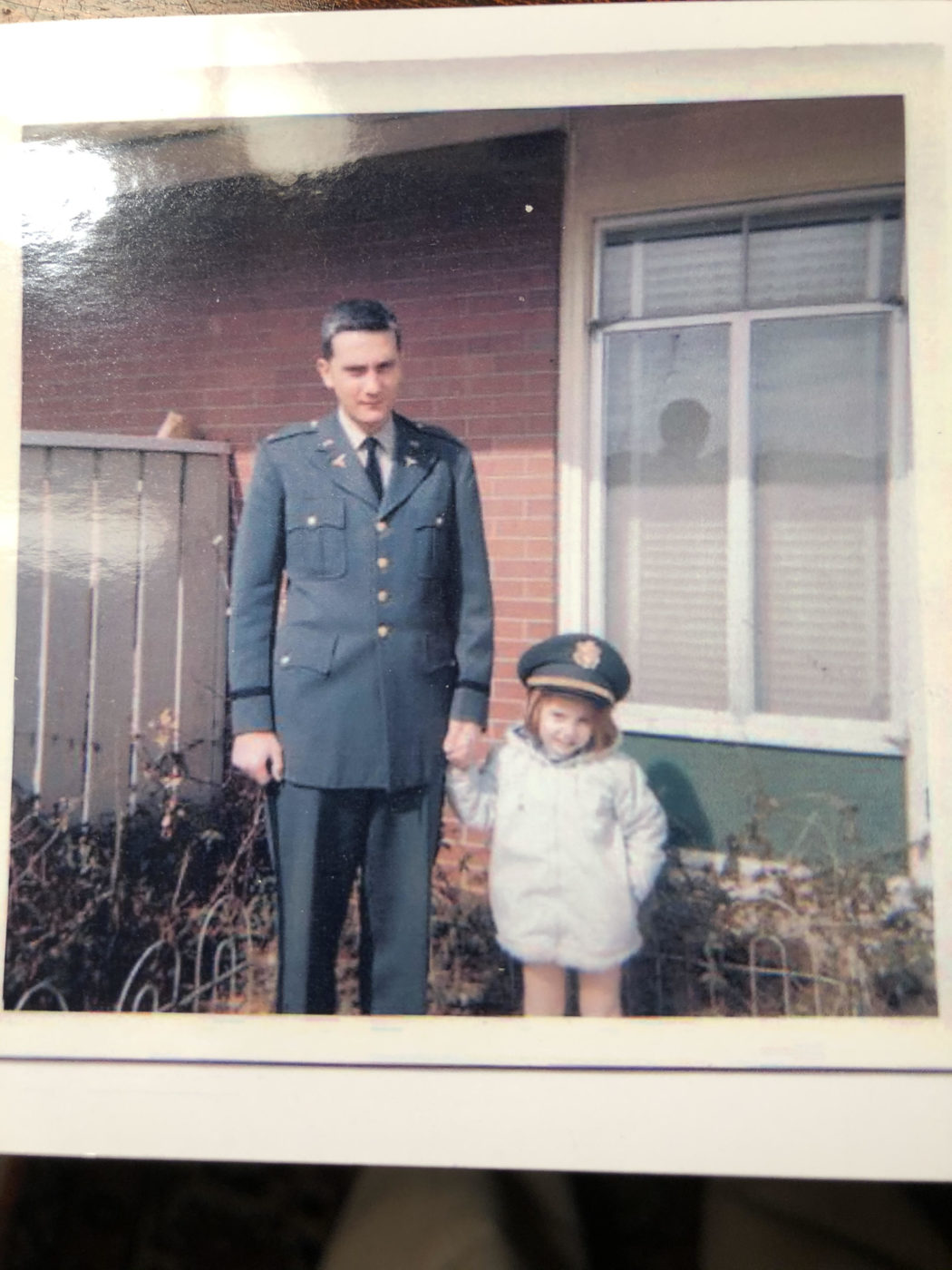 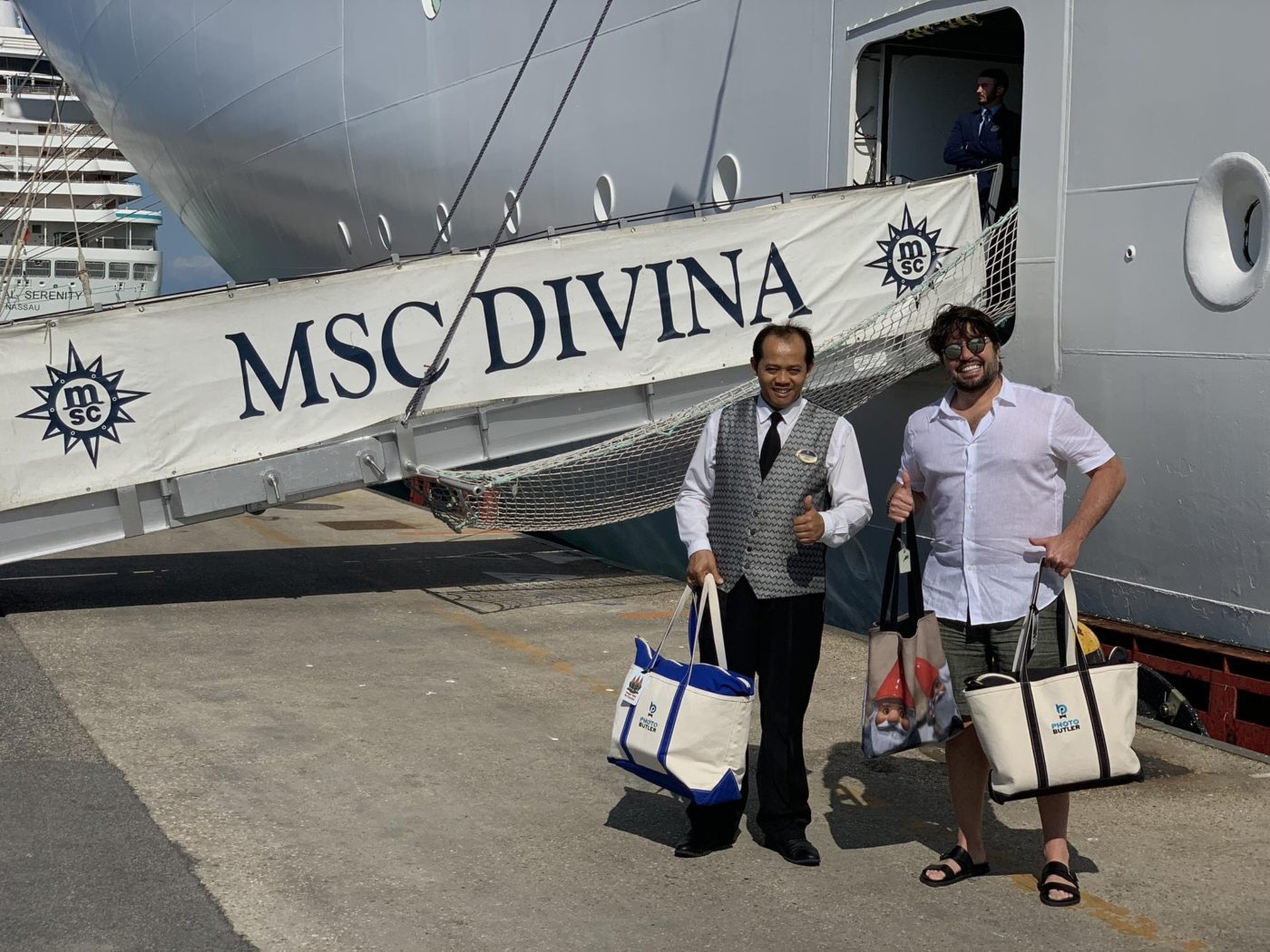