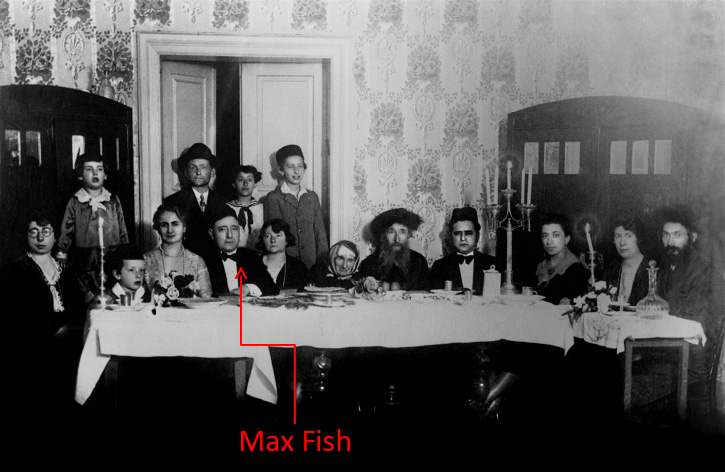 Heroes in Our Midst

Transformation is also evident with the various Jewish leaders over time. Abraham, Moses, Theodore Herzl were all ordinary people who were transformed by force of will and by the events of their time into extraordinary leaders who had a major impact on Jewish life and history.

Reading obituaries is a personal hobby. Throughout the year, I regularly read obituaries looking for heroes whose lives represent the transformation from ordinary to extraordinary that I can highlight in that year’s Seder.

The point I try to make is that extraordinary life transformations are not a thing of the past. Contemporary history has many examples of ordinary. Some were Jewish, but many were not. At our Seder, we read about Anne Frank and we read about Rosa Parks.

A personal note: A few years ago I found an article about my grandfather, Max Fish who saved forty-two of his relatives during World War II. That began my own annual review of ordinary people who did something extraordinary during their lives. Each year and all year long, I read the obituaries in the newspaper in order to find examples for our annual Seder.

We invite the Breaking Matzo community to contribute examples of their relatives, or of other righteous people who exemplify the ordinary to extraordinary transformation in the Jewish community.

My highlighted obituaries have included:

Samuel Willenberg (2016) – Samuel Willenberg, the last survivor of Treblinka, the Nazi death camp where 875,000 people were systematically murdered, has died in Israel at the age of 93. Only 67 people are known to have survived the camp, fleeing in a revolt shortly before it was destroyed.

Charles Goldstein (2015) –  Charles Goldstein, a high-stakes New York real estate lawyer who transformed himself into a tenacious advocate for recovering art looted from Holocaust victims, died on July 30 in Manhattan. He was 78.  Mr. Goldstein, a lawyer with the firm Herrick, Feinstein, was counsel to the Commission for Art Recovery, which estimates that it has recovered or helped recover more than $160 million worth of stolen art since it was established in 1997.

Nicholas Winton (2015) –  Sir Nicholas Winton, who has died aged 106, has been hailed as a hero of the Holocaust.  During the first nine months of 1938, he oversaw the Czech Kindertransport, which brought Jewish children from German-occupied Czechoslovakia to safety in the UK.    Winton set up an office in a hotel in Prague, where he was quickly besieged by families desperate to get their children out before Germany invaded Czechoslovakia.  The unfortunate thing was that no other country would come along and help Sir Nicholas Winton.  On his return to London, he worked with relief organisations to set up the Czech Kindertransport, just one of a number of initiatives attempting to rescue Jewish children from Germany and the Nazi-occupied territories. For more information, watch Sir Nicholas Winton as well as the 60 Minutes piece,   “Saving the Children.”

Jay Rosenfield (2014) – When Jay Rosenfield and his wife, Barbara, heard teenagers jeer the movie “Schindler’s List” in 1994, their reaction was not anger, but resolve. They bought 400 tickets so students at Concord and Kearsarge Regional high schools in New Hampshire could go see the movie. The Rosenfields also arranged and paid for buses and lunches, and organized discussions afterward.   “Years later, Jay and Barbara continued to get letters from students commenting on the impact the program had on their lives,” said their daughter Kim of New London, N.H.  The Rosenfields received a statewide award for establishing the “Schindler’s List” educational programs, according to family.   Mr. Rosenfield and his wife told their five children “that there were people in need and that we should be aware of and act on that,” Kim said. “My father saw every encounter as an opportunity to lift people up and make a new friend.”

Dr. Tina Strobos (2012)- a fearless woman who hid more than 100 Jews in an attic in Nazi-occupied Amsterdam, a few blocks from Anne Frank’s house.

Reginald Levy (2010) – a captain of a hijacked Belgian airline in 1972 was hailed as a hero for enabling Israeli commandos (including Benjamin Netanyahu) to storm the plane and rescue all 100 passengers and crew members.

Miep Gies (2010) – the last survivor among Anne Frank’s protectors and the woman who preserved Anne Frank’s diary that endures as a testament to the human spirit in the face of unfathomable evil.

Helen Suzman (2008) – a Lithuanian born Jewish immigrant, Suzman was the tireless leader of the anti-apartheid movement in South Africa. From 1961 to 1974, Suzman was the only woman, the only Jew in Parliament, and the sole member of Parliament unequivocally opposed to apartheid.

Irena Sendler (2008) – a Polish social worker who saved 2,500 Jewish children from the Nazis by smuggling them out of the Warsaw Ghetto and giving them false identities.

Often harassed by the police, Suzman had a special technique for dealing with wiretapping, which was blowing a loud whistle into the mouthpiece of the phone. As the only English-speaking Jewish woman in a parliament dominated by Calvinist Afrikaner men, Suzman was an outsider. She was once accused by a minister of asking questions in parliament that embarrassed South Africa, to which she replied: “It is not my questions that embarrass South Africa; it is your answers.”

Rabbi Arthur Hertzberg (2006) – a relative of the Goldfarb family who led Jewish leaders in marching with Martin Luther King and chaired the first Jewish Delegation to meet with the Pope.

Rabbi Wolfe Kelman  (1990) – a Goldfarb family relative, (the youngest member of the Goldfarb 1930 Dynow Poland Seder), who joined his mentor Rabbi Abraham Heschel during the Selma to Montgomery marches in 1965 with Dr. Martin Luther King, Jr. Rabbi Kelman also worked with Rabbi Heschel to prepare him for his 1964 meeting with Pope Paul VI in Vatican City. Wolfe Kelman’s daughter, Naamah was the first female Rabbi in Israel. His son, Levi, performed Lucy’s (my daughter) Bat Mitzvah in Jerusalem in 2012.

Lucas Carrer (1958) – In 1943, the Nazi occupying forces on the Greek island of Zakynthos called Mayor Carrer and demanded a list of all the Jews on the island. Distraught, Carrer consulted the local Bishop Chrysostomos and, together, the two made the courageous decision to deny the Nazis’ request. Now, Carrer’s daughter is visiting Israel where she is being honored for her father’s bravery.