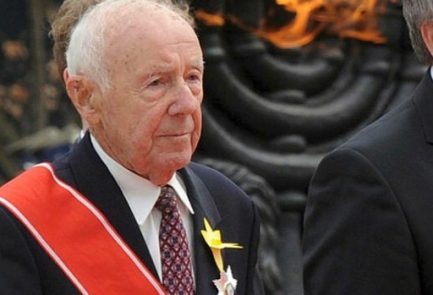 Through a secret passageway under the streets of the Poland’s capital city Warsaw, Simcha Rotem led more than 80 Jewish ghetto survivors to safety after the 1943 Warsaw ghetto uprising. Simcha Rotem was born February 24, 1924 in Warsaw, Poland and was a member of the Akiva Zionist youth movement from an early age.

Only 15 years old when the Nazis invaded Poland in 1939, Rotem decided to join the Warsaw Ghetto’s Jewish Combat Organization, ZOB, in 1942. Rotem soon earned the nickname “Kazik” derived from the Polish name “Kazimierz” meaning “someone who destroys opponent’s prestige/glory during battle,” as a result of his fearlessness in the underground passageway of Warsaw where he saved many Jews from either murder or deportation to the Treblinka death camp. Rotem’s original journey through this hidden passageway was to meet with ZOB commander, Yitzhak Zuckerman, on the Gentile side, to discuss an escape for the fighters. The two members ended up trapped as Nazi commanders discovered the passageway. With the fighting and burning of the ghetto raging above and determined to help his fellow survivors, Rotem discovered a passage to the ghetto through an unguarded sewer opening. There he found one of the last surviving leaders in the ghetto Zivia Lubetkin, and her team of 80 fighters. Rotem led them through the sewers to an outlet in a forest just outside of the city where they could safely escape.

After WWII, Rotem played an instrumental role in the Beriha organization facilitating the immigration of European Jews to Mandate Palestine and eventually made aliyah to Israel himself in 1946 where he worked until his retirement in 1986. Simcha Rotem was awarded Poland’s Grand Cross of the Order of Polonia Restituta in 2013, yet still criticized the Polish administration for their failure in recognizing the role of Polish citizens in German extermination of Jews during the war. Rotem powerfully stated: “Only once the Polish society truly faces the bitter historical truth, revealing its scope and severity, will there be a chance that those horrors will not be repeated. Therefore, I vehemently oppose the distorted law recently passed in Poland, meant to eradicate from historical recollection the heinous acts the Poles committed against the Jewish people during that dark time.” Simcha Rotem died in Jerusalem on Saturday, December 22, 2018 at the age of 94.