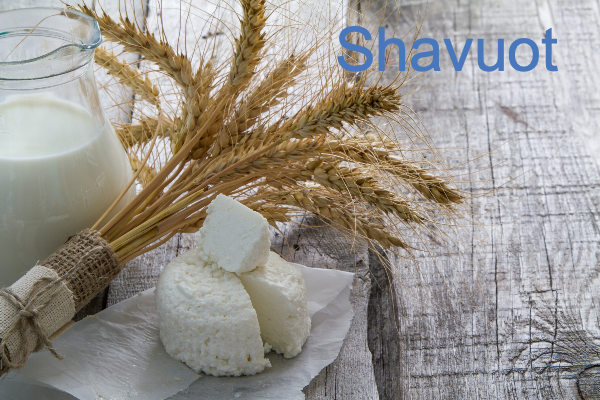 Shavuot may not be the most well-known Jewish holiday, but it is a very important one with rich religious and cultural significance. Here is what my Uncle Sandy (Rabbi Daniel Goldfarb) had to say about this incredible holiday:

Shavuot, the Festival of Weeks, is one of the three pilgrimage festivals in the Torah, along with Passover in the spring and Succot in the fall. While Succot and Passover are each a weeklong, Shavuot is only one day (two days for many Jews outside of Israel), and at first glance it lacks the color and zest of the previous two holidays. But first impressions can be deceiving.

Shavuot is unique among the Bible’s holidays in that it does not have a fixed date in the Hebrew calendar, unlike Rosh Hashanah, Yom Kippur, Passover and Succot. Shavuot comes 50 days after Passover, and the name the “festival of weeks” highlights the connection between these two holidays. It is also called the holiday “of the first fruits” and “of the harvest.” Shavuot’s content in the Torah is agricultural, referring to the wheat which hopefully has grown well and is ripe at this time. Colorful ceremonies of “first fruit offerings” are still very common today in Israel at kibbutzim and moshavim (communal and shared farms), even if they are not religious.

The Torah gives clear historical, as well as agricultural, reasons for Passover (the exodus from Egypt) and Succot (the little huts the Children of Israel slept in during the wandering in the desert). Shavuot in the Torah has no historical function. The tradition that the Torah was given to Moses and the Jews at Mount Sinai on Shavuot comes later, about 2000 years ago, in the Rabbinic tradition (the Talmud). It took some clever interpretation; the Torah does not specify the date of the revelation at Sinai either. Assigning it to Shavuot adds an important spiritual dimension to the holiday.

Over the centuries a number of traditions have developed around Shavuot. Many people decorate their homes and synagogues with greens, and the giving of the Torah is recalled in all-night learning sessions. Jerusalem, Tel Aviv and many communities in Israel are busy all night, with people wandering for study from one place to the next. And there’s an old and popular custom for people to eat dairy foods on the holiday, recalling the verse in Song of Songs 4:11 “milk and honey are under your tongue.” Others say the Torah nurtures the Jewish people the way a mother’s milk nurtures the new-born. And the Book of Ruth recounts a touching story of kindness and inclusion, how a Moabite woman became the great-grandmother of King David, is read on Shavuot. Shavuot is a lovely holiday that can be celebrated both with community in the synagogue and with family or friends in the home.