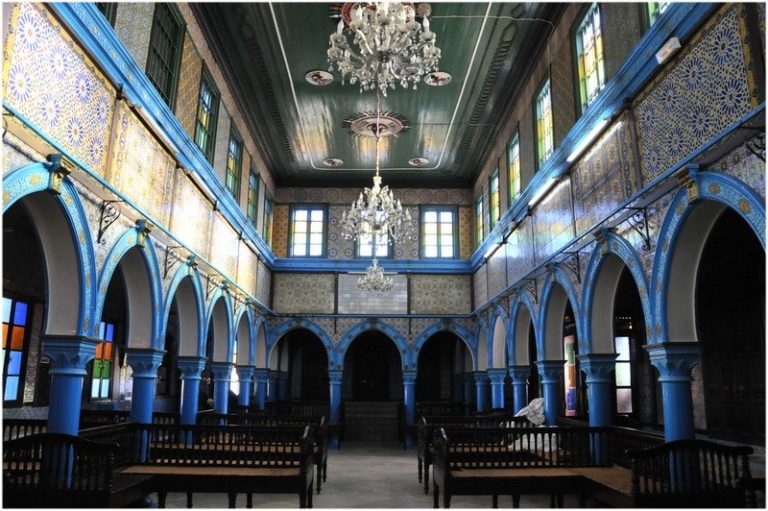 I recently visited Ras Al Khaimah and met a friend from Tunisia who told me about the amazing El Ghriba Synagogue and inspired me to write this blog.

Throughout the world, there are a variety of synagogues with unique, impressive, and incredible features.  This includes the Mikve Israel Emanuel Synagogue on the island of Curaçao, Hungary’s Dohány Street Synagogue and the Great Synagogue of Rome. I’d like to talk about another magnificent synagogue still operating today: El Ghriba Synagogue in Tunisia.

El Ghriba Synagogue is the oldest synagogue in Tunisia and one of the oldest in the world.  Also known as Djerba Synagogue, it is located on the island of Djerba.  The Jewish community has deep roots in Djerba. It is said Jews have lived there for over 2,500 years. El Ghriba is located in what was once the Jewish village of Hara Seghira and is now known as er-Riadh. There are several other synagogues and prayer houses on Djerba, but only El Ghriba holds the Torah. This was purposely done to preserve the synagogue’s place as the center of Jewish life on the island. El Ghriba means “the marvelous” or “the strange” in Arabic, a moniker that refers to the synagogue’s storied origins.

There are several stories of how the synagogue was founded in the 500s BCE. The exact details have been lost to history and a variety of legends surround the temple.

One of these legends is that the high priest Tzadok and other Israeli rabbis fled to Djerba after the destruction of the first temple in Jerusalem. These holy men brought with them a stone from the first temple and used it in the construction of El Ghriba Synagogue. Some say this sacred stone was incorporated into the synagogue’s floor, others that it is a part of the entrance archway.

Another legend says that a holy rock fell from the heavens and landed in Djerba where a mysterious woman appeared and had the synagogue constructed.

Another story is that a deeply religious woman named El Ghriba lived alone on the land where the synagogue now stands. One day her house caught fire and she perished, but her body did not burn or rot. The local Jews saw this as a miracle and a sign and built the synagogue there in honor of this holy woman.

One final legend says that a Jewish refugee fled Israel with a Torah scroll from the temple in Jerusalem. Upon reaching Djebar she died of exhaustion and El Ghriba synagogue was built on the spot she perished.

While the exact origins of the synagogue aren’t known, what is known is that the original synagogue was destroyed in the 1500s by the Spanish during a military incursion into Tunisia. A new synagogue was constructed in the late 1800s and has been used since.

El Ghriba Synagogue’s importance is not just in its history, but in its modern-day relevance as well. Every year thousands Jews from all over the world make a pilgrimage to the synagogue during a multi-day festival centered on the holiday of Lag BaOmer. These pilgrims are welcomed not only by Djerba’s Jewish population, but residents of all religions and creeds. The pilgrims visit El Ghriba synagogue to pray, light candles and give alms. It is the only occasion each year where men and women are not separated at the synagogue.

There is a local tradition that visitors write down their wishes on eggs and leave them on the floor. In particular unmarried women write their names on these eggs which are left to cook in the heat of the synagogue’s many candles. The cooked eggs are returned to the women who eat them, ensuring they will soon be wed.

Furthermore, each year as part of the pilgrimage two large processions are held. Participants push a large wheeled chandelier that is draped in colorful veils. It is referred to as the arusa or “the betrothed” due the veils’ similarity to bridal veils. The procession is full of dancing and music. It is meant to resemble a wedding ceremony, but instead of celebrating the bond between two people it celebrates the bond between the people of Israel and God.

The synagogue’s exterior is modest but inside it is built with the intricate details and colorful designs of the Tunisian and Moorish styles. The walls are lined with tiles and adorned with hand painted blue ornaments. Originally the synagogue had 12 windows, one for each of the tribes of Israel. However, due to expansions and reconstruction the building now has additional windows. Some of the interior columns inside the temple have been left incomplete. This is done purposely; nothing is perfect except for divinity so it was decided that the synagogue would always be left incomplete. Originally there were both an open and an enclosed prayer area, but the open area was later enclosed in part of a renovation to accommodate having more people in the synagogue. Now there are two main halls, one is a prayer hall and the other contains the Torah itself.

El Ghriba synagogue is a monument to the deep history of the Jewish people and their strength to endure through the centuries. It is also a symbol of hope for the future. The Jews and Muslims of Djerba have lived together peacefully for centuries. They stand as a shining example of peace and brotherhood that the rest of the world should strive for. El Gribha Synagogue is a place of history, celebration, faith and joy. Truly it is a sensational synagogue.

The Jews of the island of Djerba wear a black band around their pants, symbolizing the destruction of the first temple in Jerusalem.

You can read more about the annual pilgrimage to Djerba and the incredible interfaith celebrations that ensues here.