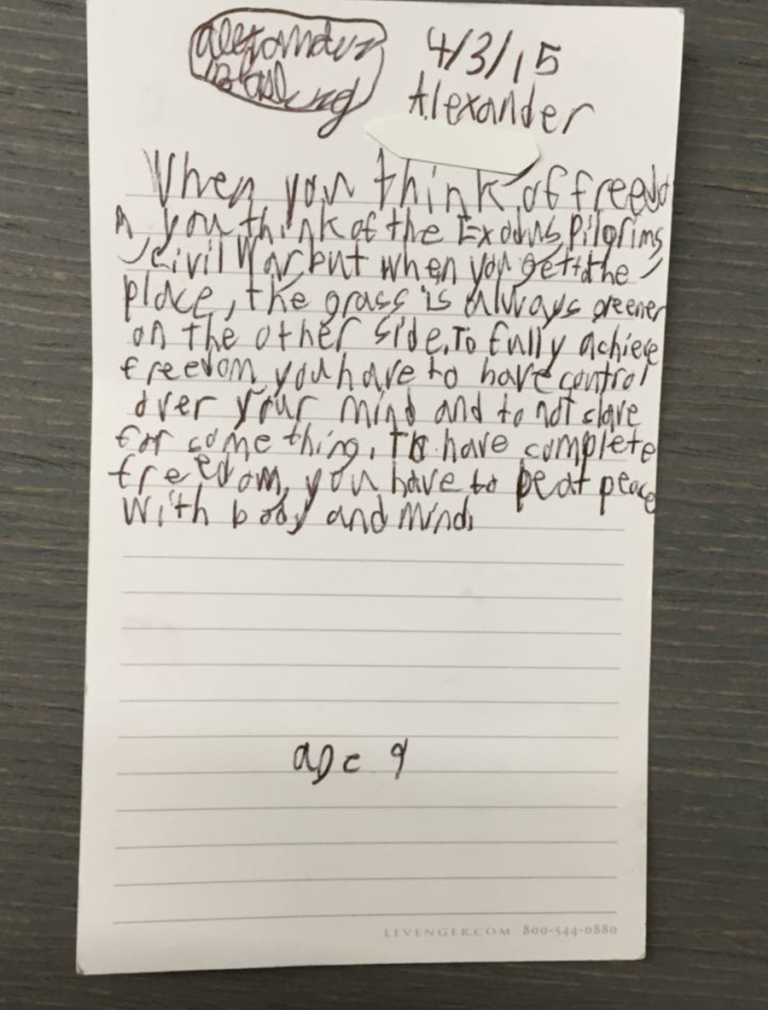 Let’s listen to our children talk about Passover.

Alex, age 9, discusses Freedom and Slavery. Mayan, age, 10 wrote about Miriam and the power of women in exodus.

What did your children and grandchildren talk about at your Passover Seder?

Miriam: She-ro for the Ages
By: Ma’ayan Zimrah Rosenbaum

In preparation for Pesach this year, I chose to research Miriam and her role in the Exodus story. I believe that Miriam should be honored as a heroine and role model, whose life is celebrated at the Passover Seder and at other times of the year.

There is a midrash (rabbinic legend) that teaches that when Miriam was a young girl, she saved Moses’ life, even before he was conceived. According to this legend, when Pharaoh decreed that all the baby boys were to be thrown into the Nile, Miriam’s father, Amram, decided to divorce her mother, thinking that there was no point in staying married if they couldn’t have boys. Feeling helpless, many other Israelite men followed suit. Miriam bravely went to her father to tell him that he was making a terrible mistake. She went so far as to say that his behavior was worse than Pharaoh: while the Egyptian king ordered the murder of baby boys, Amram’s decision would lead to the death of all future Israelite generations. Miriam’s father listened to his wise daughter and got back together with his wife, as did all the other men who had followed his lead.

Some commentators believe that Miriam, and her mother Yocheved, were actually the midwives Shifrah and Puah who defied Pharaoh’s command to murder the Israelite baby boys. The great French interpreter, Rashi, taught that Yocheved was Shifrah because the Hebrew word “Shifrah” is related to physical wellbeing, and she helped ensure the basic safety of the babies. Miriam was said to be Puah because the word “Puah” is related to the soothing of the newborns through one’s voice. Given that Miriam would have been quite young when she worked as a midwife, it makes sense to me that she would have vocally soothed the babies while her mother tended to their physical needs.

I want to add to the collection of stories about Miriam’s personality and name: If one breaks her name into two parts, it can be read as mar and yam, meaning “bitter” and “sea.” When Miriam experienced bitterness, she responded by standing up for what she believed in and argued stubbornly (or “bitterly”) for it. I think that “sea” or water is part of her name for a few different reasons, including the biblical teachings that she watched over her baby brother as he floated down the Nile and led the people in song and dance at the Sea of Reeds. And, the rabbis taught that she provided water for B’nei Yisrael (The Children of Israel) with water throughout their 40 years in the desert. I also imagine Miriam as a free-spirited person, like the waves in the ocean: sometimes they move in a neat pattern, but at other times they move in unpredictable ways.

In the last 20 years or so, people have been incorporating Miriam into the Seder by placing a special cup of water on the table, just like we do with Elijah’s cup of wine. This newfound tradition was first introduced by a woman named Stephanie Loo from Boston, Massachusetts. She based this ritual on the teaching we just explored about Miriam’s special ability to provide her people with water in the wilderness.

There are different ways to use Miriam’s water cup at the Seder. Some people fill up a full cup of water from a pitcher or jug, while others have each person pour a little bit of water into the special cup. I prefer the second option as it is way for us to give back a tiny fraction of the water Miriam provided for our ancestors.

There are also different times during the Seder when people raise Miriam’s cup. Some do it after reciting the 10 Plagues and before the chanting of Dayenu (“Enough,” a song of praise) so that Miriam accompanies us through our journey from slavery to freedom. Others raise it along with Elijah’s wine cup so that these two prophets are honored together. I prefer the first version because while Elijah represents the future coming of the Messiah, Miriam sustains us in our journey through history.

All this research on Miriam has made me wonder, what other awesome women in the bible deserve recognition for their acts?

Ma’ayan Zimrah Rosenbaum is a fourth-grade student at the Jewish Community Day School in Watertown, MA. She is an aspiring author and a proud Jewish feminist! She is grateful for the help of her parents in editing this piece.