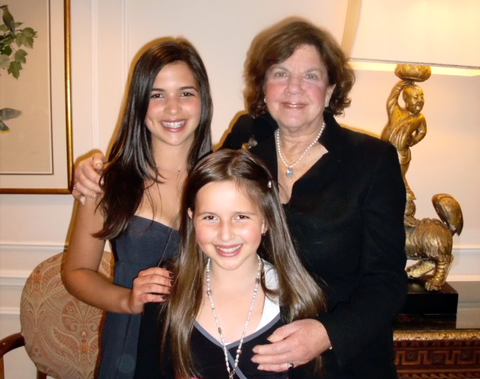 This article was written by Andy’s mother, Myra Yellin Outwater (of blessed memory) and published in The Morning Call, April 21, 1997.

Passover’s Traditions Provide Present with a Link to the Past

Recently, we read that the last days of the Heaven’s Gate cult were spent eating fast food. However, McDonald’s doesn’t nourish the soul. Chicken soup and chopped liver do.

For years, my memories of the Jewish holiday meals have been filled with the comfort foods of tradition. And as I set the table once more for Passover and cook my chicken soup, I know that while the Passover Seder may be high in cholesterol, it’s also high on love.

To me, the lesson of Heaven’s Gate is that too many people think that they can establish their own sense of order with few connections to the past. But sadly, not many have found an “order” as satisfying or as nourishing as that of tradition. As I gather the Passover Haggadahs (prayer books), I think a lot about the fact that “seder” means order, and each year at Passover we conduct ourselves the same way, according to tradition.

Seders have helped keep the fabric of Jewish society together for thousands of years. At the Seder, we talk of service to others and service to God rather than self-service. In the center of the table in every Jewish home are the symbols of the Passover story, the flight of the Jews from Egyptian bondage. There is a lamb shank, an egg, the bitter herbs, the sweet mixture of charoseth, the salt water, a green vegetable, the goblet of wine for the prophet Elijah and three matzah. And each year, we open the Haggadah and tell the same Passover story, say the same prayers, sing the same songs and serve the same menu.

And, despite the zeal of food editors to promote nouvelle Passover cuisines, most families stick to the old standbys — chicken soup, matzah balls, chopped liver, roasted chicken, matzah, flourless sponge cakes and macaroons. Matzah balls and chicken soup are the glue that have held families together for generations.

Each year, we ask the same four questions. Tonight my youngest son will be the one to ask: “Why is this night different from all other nights?”

My first memories of Seder are of me standing up, petrified, reciting the same questions. In those days, my father had the answers. Tonight I do.

We live in a society that is afraid of answers, afraid to search for painful truths. But truth and honesty are like the Passover bitter herbs and charoseth, sometimes bitter, sometimes sweet. It is not easy to make a commitment to traditional values. But it is part of the order of things.

But while the Seder is a holiday feast, it is also the holiday that recalls that time in history when we got the gift of the Ten Commandments. How sad it is that to many today, these laws have become irrelevant. How sad that even judges must remove them from public courtrooms; and that children no longer honor their parents; and that people kill, murder, steal, covet, commit adultery; and that too often, God becomes a swear word rather than a prayer.

My father hated a lie. He would have felt uncomfortable in today’s society where there are so many varieties, so many while lies, half-lies, safe lies and evasions.

Passover is also a time for families, and when it falls during the week, as it does this year, it is a time off during a work week to celebrate love.

This year, while the order of the service and the order of the mean remain the same, the faces at my table will be different. My mother has disappeared into her own past, a resident of a local nursing home. And my aunt is now the one to tell the old stories and be our memory. More than 70 years ago at the moment in the Seder service when the door is symbolically opened to welcome the prophet Elijah, my grandmother found a stranger standing at the door. Undaunted, she offered him food, but all he wanted was directions. And through the years, the telling of his visit has become a special part of our holiday service.

My own special Passover memories are of my three sons competing with each other to each the most “maror” or bitter herbs. At Passover, we eat bitter herbs to remember the pain and tears of slavery and oppression, and charoseth, a combination of chopped apples, nuts and sweet wine, to recall the joys of freedom. When my sons were younger, they thought it was macho to be able to handle the horseradish. Today the two oldest are parents themselves and will soon sample their own blend of charoseth and maror, the joys and tears of parenthood.

Why is this night different from all other nights?

Because on this night we try to learn from the past and at the end of the Seder when we search for the Afikomen, the missing piece of matzah, in order to conclude the service, that search becomes just one more link with history and an orderly transference of tradition from one generation to another.