When our eldest son mentioned that he would be spending Christmas with his girlfriend’s family this year, I admit I felt a pang of sadness. Even though I haven’t claimed that holiday for thirteen years, it still stung.

Flashback to November of 2003 when I was just a few steps away from completing my conversion to Judaism. Until that point, our inter-faith family had luxuriated in both Hanukkah and Christmas, but primarily Christmas as I’d been raised Christian and my husband’s assimilated reform family also celebrated Christmas. Ours were never religious Christmases, however. We never attended church, nor connected to the real meaning of the observance, and to me, so mething had always felt wrong, like it was a hollow, a bowing down to consumerism, a day of over-eating and drinking.

In 1994, when we started our family, my husband and I made a deliberate decision to strive for clarity in our religious identities, and raise our children Jewish. The one thing we struggled with was December. Why was giving up Christmas so hard? 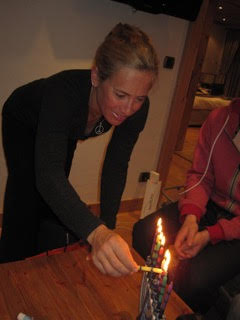 So back to November of 2003. I was lamenting aloud the mess sappy pine needles were bound to make on our new living room carpet. That very same eldest son, who was three months from becoming a bar mitzvah, challenged me. “Mom,” he asked. “Why are you even getting a tree? We’re Jewish.”

Up to that point, the two-year conversion process had been easy, fairly academic, more like a work in progress, a pursuit to put me on equal footing with John and the kids. I set out wanting to be a good example for them, in the midst of shuttling them to religious school twice a week. But here was this son, posing a logical but difficult question, one I had to consider very seriously. It would mark a turning point, as I noticed our younger two searching my face for reaction. Any ambivalence or wavering would have been an absolute sinker.

“You’re right,” I said. “We are Jewish. Maybe this is the year we stop getting Christmas trees.

The rabbi I was studying with had forewarned me of the fragility of this moment. “Intellectually, you may be ready to do this,” he said. “But it is going to be hard for your younger children.” I tried to remember his sage advice as the fallout from my son’s challenge unfolded.

“What?” my youngest bellowed. “If we don’t get a tree then Santa wont come!” I’d opened a can of worms and things deteriorated quickly. “And if Santa doesn’t come, we wont get presents!” Her shrieks of horror echoed through the house. And from that moment on I was officially the Grinch who stole Christmas. My daughter’s tears of grief over missing out on presents brought rebukes from me that might mark my low point as a parent.

And it wasn’t just the 7 year old who got mad, it was the grandparents too. They were askance that I would make a decision that had ramifications for everyone. You see, I’d always hosted Christmas. Santa had come down our chimney. I decorated the house, the tree, cooked the festive meal, bought and wrapped gifts from Santa, gifts from us, as well as gifts from several of the grand parents and distant relatives who “weren’t sure what our kids were into. I’ll write you a check.” The management of who got what from whom, and keeping it equal, was a task that occupied a large percentage of my mental bandwidth.

I began to vehemently resent the materialism, but still, did that give me the right to cancel the holiday for all nine of us? I shuddered at such power, but proceeded into the unknown. With a determined façade that I hoped masked a guilt-ridden interior, I became resolute in creating a new solstice glow. Storing away a lifetime of nostalgic tree ornaments and collecting colorful menorah instead.

My rabbi helped me pick up the pieces. “Don’t think of it as losing Christmas, think of all the traditions you are gaining.” In the years that followed, we celebrated Shabbat, Hanukkah, Passover, Rosh Hashanah, Simchat Torah, and Sukkot with extra zeal. During Hanukkah we set aside each of the eight nights for a special, albeit often school-night, observance. There was a nightly candle lighting with the kids betting on which flame would last the longest, prayer, singing, latkes, acts of charity, exchanging small gifts, and for the special Shabbat dinner during Hanukkah we’d include friends and get up a lively game of Dreidel. Andy Goldfarb could get especially enthusiastic, teaching the kids the fine skill of spinning the dreidel on its handle.

So why wasn’t I prepared for our son’s recent proclamation that he’d be elsewhere for Christmas? I’ve obviously modeled the freedom to choose one’s own path and our December traditions leave blank spaces for our adult children to fill in as they wish. Indeed this is what I set in motion 13 years ago when I said, “There will be no more Christmas trees.”

This year as Hanukkah begins on Christmas Eve, the holidays really do collide, both on the calendar and possibly, as was in our case, at the heart of an inter-faith family.

As for my son, after a little meditation, I’m ok with it. I might flex and release my Jewish muscle every December, but I know the love we’ve created in our family transcends a date on the calendar. And that the loss I might feel is not for Christmas but for my young family. Kids grow up and leave and I will miss them no matter the date. Together or apart, I have taught them to delight in the miracle of the season: the miracle of the oil, of independent thinking, of generosity, and of keeping our internal flames shining in the world.

Jeannie Blasberg is a writer living in Boston. Her debut novel, Eden, will be released May 2017 by She Writes Press. Please visit her website or Facebook page to learn more.