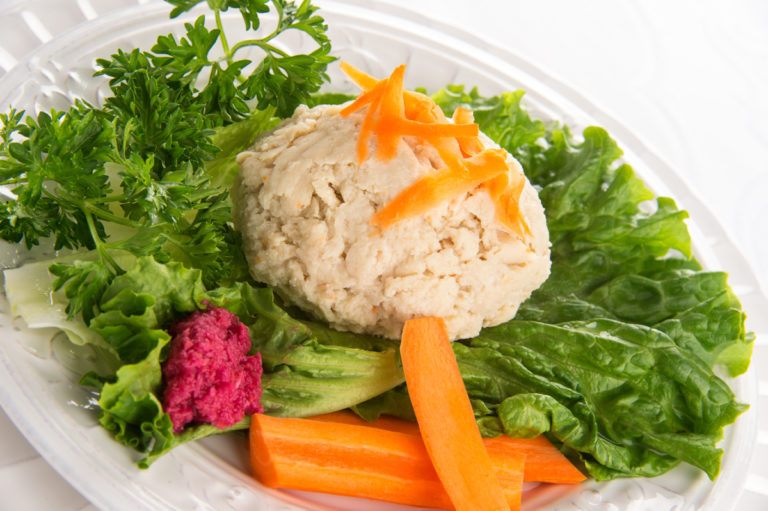 If you’ve ever sat down for a Sabbath or Rosh Hashanah dinner with your family, you’ve probably seen it: a plate filled with gefilte fish. Maybe you arrived early and found a live carp swimming in the bathtub, blissfully unaware of its Sabbath fate. Gefilte literally means stuffed in Yiddish, making its name “stuffed fish.” Gefilte fish remains a classic, but why is it so ubiquitous? Interestingly, gefilte fish has holy roots, according to Chabad.org and The Gefilte Fish Chronicles: Companion Cookbook compiled by Iris Burnett.

Chabad.org points out that in the Torah’s depiction of the creation of the world, the word “blessing” is used three times, referring, in order, to the creation of fish, man, and Shabbat. Because it is a fish eaten by man on Shabbat, Gefilte fish is actually a triple blessing in disguise! Additionally, Chabad.org explains that each of the Hebrew letters has an assigned numerical value, and the letters in the Hebrew word for fish (dag) add up to seven. Therefore, it is fitting to eat fish on the seventh day of the week, the Sabbath. Finally, there is a tradition that when the messiah comes, the main dish at the great celebratory feast will be the Leviathan, or the primordial giant fish referred to briefly in the Bible. Sabbath fish, while not as gargantuan as this mythological beast, remind us of the possibility of future redemption.

But what makes gefilte fish different from all other fish? “The Gefilte Fish Chronicles” has some answers for us here: it’s all in the bones (or the lack thereof!). According to Jewish law, one cannot separate the edible parts of a fish from the indelible parts on the Sabbath, meaning that the carp had its bones removed on Friday. Before refrigeration was available, chopping the fish, adding onions or other vegetables, and then cooking the fish ensured that it did not go bad by Saturday. And so the gefilte fish was born.

While many Jews opt for premade or canned gefilte fish, the enduring legacy of the carp in the bathtub lives on. Renowned architect Frank Gehry, born Frank Goldberg, known internationally for his works, especially his fish inspired designs (pictured here), gleaned inspiration from childhood adventures to the fish market with his grandmother. In an interview, Gehry described the impact of these childhood gefilte memories, “In Toronto, when I was very young, my grandmother and I used to go to Kensington, a Jewish market, on Thursday morning. She would buy a carp for gefilte fish. She’d put it in the bathtub, fill the bathtub with water, and this big black carp—two or three feet long—would swim around in the bathtub and I would play with it. I would stand up there and watch it turn and twist . . . and then she’d kill it and make gefilte fish and that was always sad and awful and ugly.” However, he later came back to the beauty in the fish. “I was watching the beauty of carp swimming in a pool in Japan and thinking about how elegant and architectural they were. It inspired a beginning of a study of these forms . . . That study took a few years. It then became a language that I guess became Bilbao and a few other projects.” In Gehry’s buildings, we can physically see the history of Jewish cuisine around us.

“The fish we buy in 45 pound frozen blocks. We use mainly four types: white fish, carp, pike, and mullet. We grind them a second time, and we add the additional ingredients,” Rabbi Hayum said. “Each recipe has a unique twist.” After all of the recipe-specific ingredients are added, the fish are pumped into a holding tank. From there, a machine called an extruder extracts the fish and makes them into that familiar gefilte fish shape. Once the fish are in this shape, they are taken to a blanching table, where they are cooked for three to four minutes. “They are cooked enough so they can be picked up and not fall apart,” Rabbi Hayum said. After that, the fish are manually packed into jars at the factory.

At the same time, broth is simmered in tanks in preparation to be added to the jars. Once the broth is ready, the fish go to a filler, which fills their jars with broth. Then, jars are loaded into large baskets. What happens to these large baskets is perhaps the biggest surprise of the production process. Over 800 baskets can be loaded into a machine called a retort, which is essentially a giant pressure cooker. There, the fish get fully cooked.

While gefilte fish isn’t as well known as it once was, Rabbi Hayum said that demand has remained fairly steady. “A lot of younger people are becoming more gourmet-ish, and they’re buying the frozen stuff and making their own,” Rabbi Hayum said. However, many still opt for the pre-packaged route.

So, the next time you head to Bubbie’s for Shabbat dinner, take a moment to appreciate those balls of fish, whether freshly made or fresh from the pressure cooker. And always remember to check the bathtub before you take a bath!