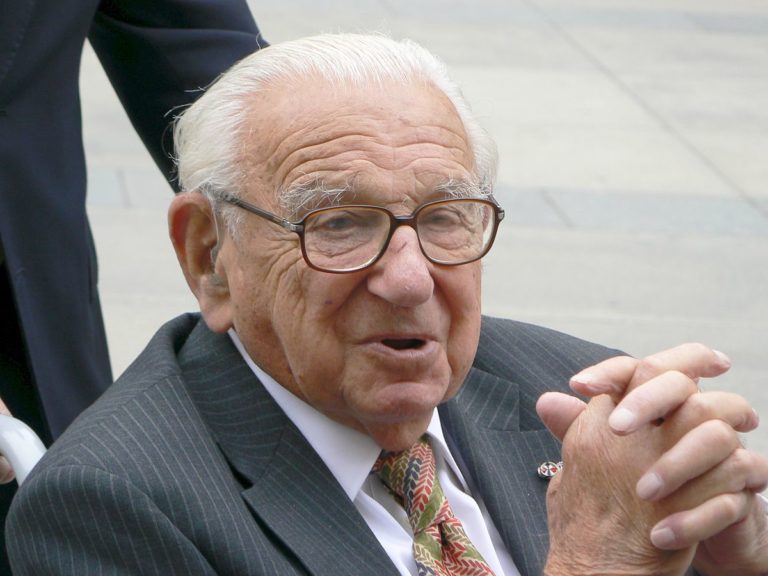 Sir Nicholas Winton, hailed as a hero of the Holocaust, died at the age of 106 on July 1, 2015. During the first nine months of 1938, he oversaw the Czech Kindertransport, transporting Jewish children from German-occupied Czechoslovakia to safety in the U.K. He worked tirelessly to ensure money was raised and homes were found for the young refugees. It was 50 years before the story of his heroic efforts became public knowledge.

Winton was born on 19 May 1909 in the well-heeled Hampstead district of north London. His Jewish parents had moved from Germany to London in 1907 and changed the family name from Wertheim to Winton. They also converted to Christianity. Winton became one of the first pupils at the newly opened Stowe School in Buckinghamshire. Although he left without finishing, he had developed a love of mathematics. He continued his studies at evening classes before moving to Germany, where he worked in banks in Hamburg and Berlin.  Just two years before Hitler became German chancellor, he moved to work in Paris before returning to London. His mother’s family remained in Germany and that, coupled with the stories of Jewish refugees fleeing, made him all too aware of the persecution of the Jews by the Nazis.

In December 1938, Winton was due to go on skiing in Switzerland when he suddenly decided to travel to Prague, where a friend was helping Jewish refugees. There he visited several refugee camps. Winton had an idea was to rescue children by locating families in the U.K. who could give them a home. A 1938 Act of Parliament permitting the entry of refugee children under the age of 17, help spur his efforts. Winton set up an office in a hotel in Prague, where he was quickly besieged by families desperate to get their children out before Germany invaded Czechoslovakia. He later returned to London, where he worked with relief organizations to set up the Czech Kindertransport, just one of a number of initiatives attempting to rescue Jewish children from Germany and the Nazi-occupied territories. In the first eight months of 1939, eight trains left Prague taking 669 children to safety. A further 15 were flown out via Sweden. A ninth train was scheduled to leave Prague on 1 September 1939, the day Germany invaded Poland. “Within hours of the announcement, the train disappeared,” Winton later recalled. “None of the 250 children on board was seen again. “

Winton told no-one about his pre-war efforts and it was not until 1988 that his wife discovered a scrapbook containing a series of documents with the names of the rescued children. In July of that year, Winton appeared on an edition of the BBC program, That’s Life, and some of the people he had rescued were invited to attend. Until they arrived in the studio, they had no idea that Winton was the man who had saved them. In 2003, Winton was knighted in recognition of his efforts on the Kindertransport. In 2007, he received the Czech Republic’s highest military decoration, the Cross of the 1st Class, and was nominated by the Czech government for the 2008 Nobel Peace Prize. A train dubbed “The Winton Train” left Prague station on 1 September 2009, exactly 70 years after the last Kindertransport had been due to depart from the Czech capital.

In October 2014, at the age of 105, he travelled to Prague to receive the Czech Republic’s highest honour, the Order of the White Lion. In his acceptance speech, he was typically modest: “In a way, I shouldn’t have lived so long to give everyone the opportunity to exaggerate things the way they are doing today.” It was another Nobel Peace Prize recipient, Holocaust survivor Elie Wiesel, who summed up the vital role of those who, like Winton, tried to save Europe’s Jewish children from the Nazis: “In those times there was darkness everywhere. In Heaven and on Earth, all the gates of compassion seemed to have been closed. The killer killed and the Jews died and the outside world adopted an attitude either of complicity or of indifference. Only a few had the courage to care.”

For more information, watch Sir Nicholas Winton as well as the 60 Minutes piece,  “Saving the Children.”