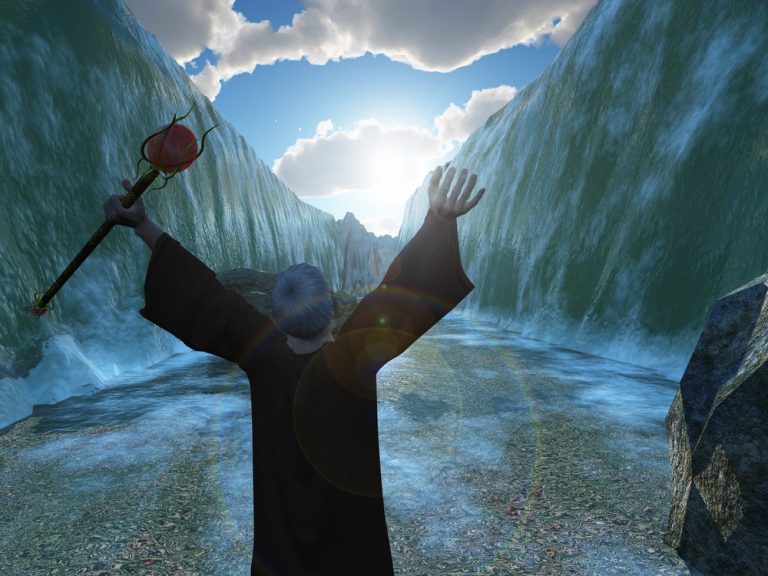 How far does your faith go?

Do you know who was the first to enter Sea of Reeds? Hint: it wasn’t Moses.

In their desperate escape from Pharaoh’s army, the Children of Israel made their way out of Egypt – only to be stopped by the seemingly uncrossable Sea of Reeds. With no solution in sight, many may have been inclined to give up. One individual, however, displayed his faith in G-d by walking straight up to the water. In a display of true divine intervention, the water parted and the Children of Israel escaped the harsh fate Pharaoh had in store for them. So who was this brave man? None other than Nahshon.

With so many incredible individuals mentioned throughout the Torah, it’s difficult to recognize them all. One such figure is Nahshon: a Judahite tribal leader in the Book of Numbers. The root of his name, “Nahshol,” translates to “stormy sea-waves,” foreshadowing what would become his most famous contribution to the Jewish people.

Nahshon has deep familial ties to the Jewish people. He was a descendent of Jacob, David, Solomon, and all the kings of the Kingdom of Judah, and is even mentioned in the genealogy of Jesus in the New Testament. Moses appointed Nahshon as prince and military commander of the Tribe of Judah and one of the leaders of the tribes of Israel.

The rabbis eulogize Nahshon as a most noble man – referencing his role as both a descendent and ancestor of great kings. His sister, Elisheba, married Aaron (Exodus 6:23), and the rabbis praised Aaron for selecting a wife with a noble brother – encouraging future Jews to do the same.

Nahshon, however, remained hopeful. He plunged into the water, continuing until the tip of his nose was under water. It was only then that the sea parted. Without this illustration of faith in G-d’s divine power, who knows what would have happened to the Israelites at the edge of the water that day?

Later, all the princes of the different tribes had to bring an offering (Numbers 7:11). Moses, flustered, was unsure who to send first. All of Israel, however, pointed to Nahshon, saying “He sanctified the name of G-od by springing first into the Sea of Reeds; he is worthy to bring down the Shekhinah; therefore he shall be the first to bring the offering” (Num. R. xii. 26).

In the Hebrew gematria, the numeric value of “Nahshon” is 414, the same as the value of Kaddish, meaning sanctification, and twice the value of Or, meaning light. Nahshon’s immense capacity for light enabled the Israelites to conquer the dark waters of the Sea of Reeds and the impending doom of Pharaoh’s army.

The (last Chabbad) Rebbe saw Nahshon’s heroic and brave endeavor as a call to action, saying:

“One fellow named Nahshon jumped into the sea, and caused the great miracle of the Splitting of the Sea. Technically, he was under no obligation to do so. But he knew that G‑d wanted Israel to move onward toward Sinai. So he did what he needed to do. There was a sea in his way. So he jumped into the sea and plowed on toward his goal … The lesson for all of us is that we must stay focused on our life’s mission, disregarding all obstacles.”

The following is the account given by the Talmud and Midrash regarding Nahshon’s role at the Sea of Reeds:

When Israel stood facing the Sea of Reeds, and the command was given to move forward, each of the tribes hesitated, saying, “We do not want to be the first to jump into the sea.”

Nahshon saw what was happening—and jumped into the sea.

Moses replied, “Master of the world, what am I to do?”

Said G‑d, “You lift your staff and spread your hand over the seas, which will split, and Israel will come into the sea upon dry land.”

And so it was. Following Nahshon’s lead, the Israelites entered the sea and were saved.