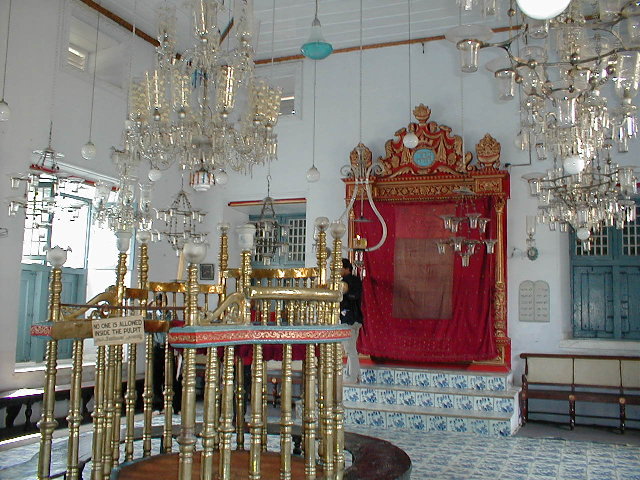 Did you know one of the oldest active synagogues in the world was built more than 850 years ago?

These are the oldest synagogues in the world that still hold Jewish services, ceremonies, and celebrations. 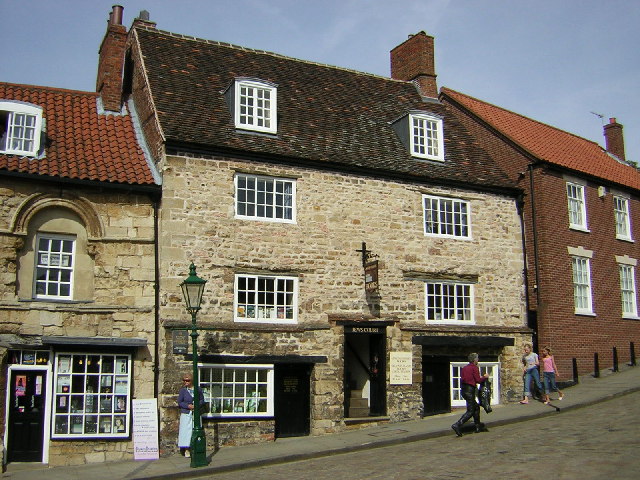 This building contains some Norman stonework on Steep Hill in Lincoln immediately above Jew’s House. In 1910, a well was dug in the basement of the building and the owner claimed the body of Little Saint Hugh of Lincoln was found. In 1992, the Lincolnshire Jewish Community, which is affiliated with Liberal Judaism, began holding regular Shabbat services in a lecture and meeting room in the building. These are held of the 1st and 3rd Sabbath of each month as well as on the High Holy Days. The synagogue currently serves as the headquarters of the Society for Lincolnshire History and Archaeology. 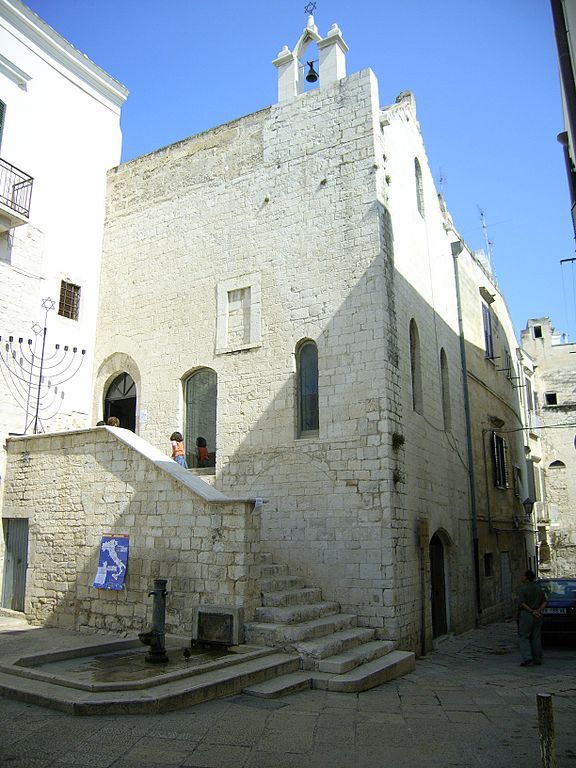 This medieval synagogue was built in the 13th century. It is one of four synagogues of Trani confiscated by the church during a wave of anti-semitism around 1380. The Scolanova Synagogue was converted for use as a church called Santa Maria. At the time, all 310 Jews remaining in the city were forced to convert to Christianity. In 2006, the Scolanova Synagogue was deconsecrated by the church and returned to its original use. A very old oil painting of St. Mary hangs in the niche that once held the torah ark. The Church has refused to allow the painting to be moved to another church or museum. Because the building is a protected historic site, the Jewish congregation is not allowed to move the painting. Their solution was to hang a large image of the menorah in front of it! 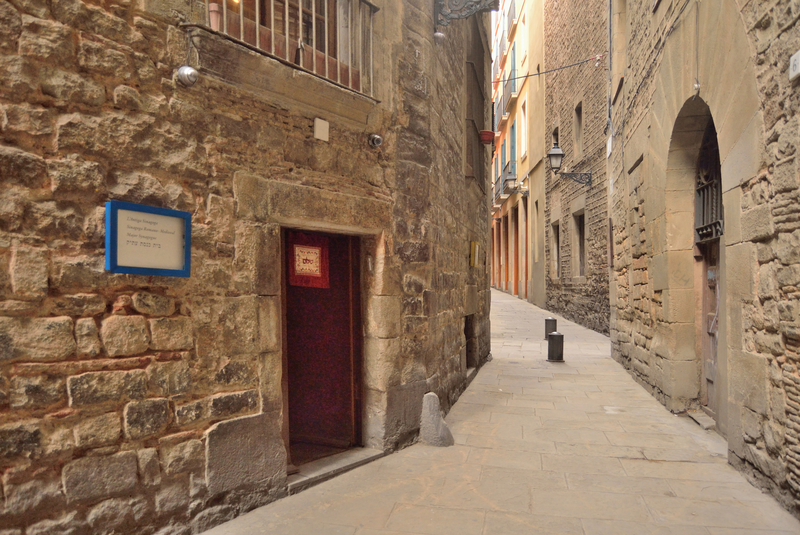 The Ancient Synagogue of Barcelona was built between the 3rd and 4th centuries. It wasn’t until the 13th century that the building started being used as a synagogue and was used as such until 1391 during the massacre of Jews in Barcelona. In the 1990s, the synagogue was rediscovered and later restored and reopened as a synagogue and museum in 2002. During the restoration, archaeological remains were uncovered including a Roman wall and the laundry that existed after the expulsion of Jews from Barcelona. Today, there isn’t a congregation that prays regularly, but the synagogue is still used for festive occasions. 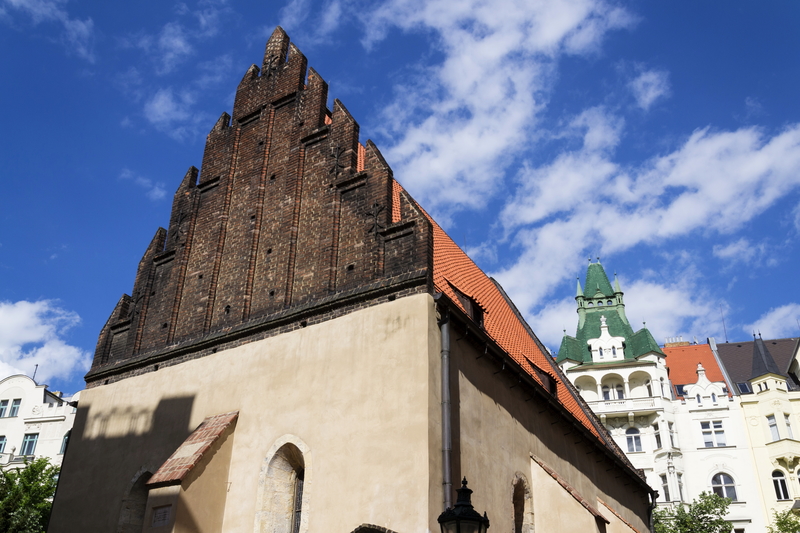 This synagogue is one of Prague’s first gothic buildings, and the oldest surviving synagogue with a medieval double-naive. According to legend, angels brought the stones from the Temple in Jerusalem to build the synagogue in Prague on the condition that the stones are returned when the Messiah comes. meaning when the Temple in Jerusalem is rebuilt, the stones from the Old-New Synagogue will be needed. The only time the the synagogue has not been used for worship was between 1941-1945 during the Nazi occupation. The Old New Synagogue is an active center for worship for Prague’s Jewish community, but not part of the Jewish museum and does not contain any displays inside the building. 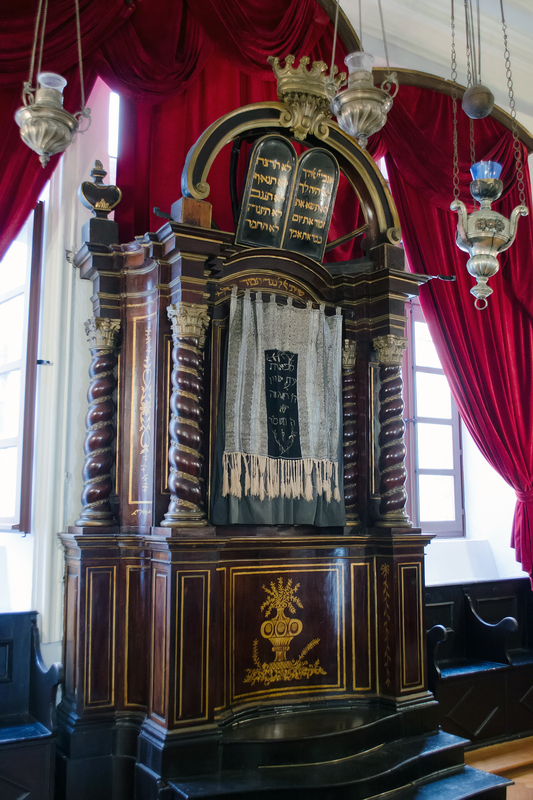 Also known as the Old Synagogue, the Dubrovnik Synagogue is the oldest Sephardic synagogue still in use today. It was established in 1352, but did not gain legal status in the city until 1408. Before the Holocaust, 250 Jews lived in Dubrovnik. Many were transferred to the island of Lopud along with other Jews from different parts of Croatia. In June of 1943 they were transferred again to the Rab concentration camp with most of the Jews from Italian-occupied lands. After the war, many of the Dubrovnik Jews settled in Israel. Currently the synagogue is owned by a local Jewish community where the main floor still functions as a place of worship for Holy days and special occasions, but is now mainly a museum which hosts numerous Jewish ritual items and centuries-old artifacts. 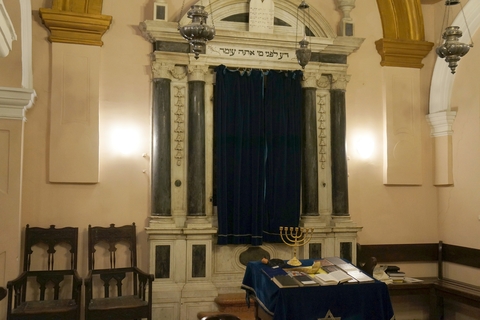 This Croatian synagogue located in the Jewish Passage, was built into the western wall of Diocletian’s Palace by Jews escaping the Inquisition in Spain and Portugal. Split is a centerpiece for Jewish life and community due to the collection of important place recognizing Split’s Jewish past. The historic Jewish cemetery on the Marjan hill overlooks the city of Split. The Morpurgo, one of the oldest operating bookstores in Europe was established by an important Jewish family and also the streets of the former Jewish ghetto, where you can see a collection of voids in doorways that once held menorot.

Paradesi means foreigner in many Indian languages, referring to the White Jews who were a mixture from Kodungalloor, Middle East and Europe. This is the oldest synagogue in India with its construction beginning during the medieval period. It was built on the land adjacent to the Mattancherry Palace, given by the erstwhile King of Cochin and lies in the corner of Jew Town. It was destroyed by the Portuguese in 1662, and reconstructed by the Dutch two years later. The synagogue houses many antiques, and has a highly decorative interior reflecting the traditions of many cultures flourishing along trade routes in the region. 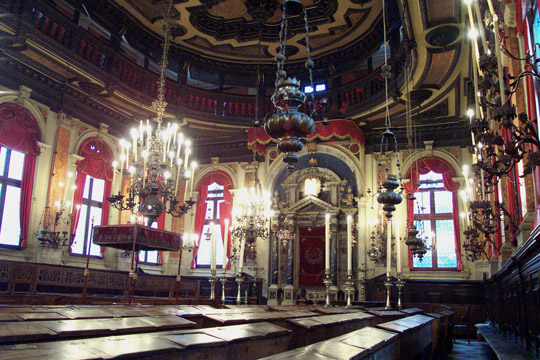 The Spanish Synagogue is the largest and most well-known Venetian synagogues. The four story yellow stoned building was designed by architect Baldassarre Longhena and founded by the Jews who were expelled from the Iberian peninsula in the 1490s. It was considered to be a Clandestine synagogue, which was only tolerated on the condition that it be concealed within a building that gave no appearance being a house of worship from the exterior, although the interior is elaborately decorated. The synagogue is open for services from Passover until the end of High Holiday season. 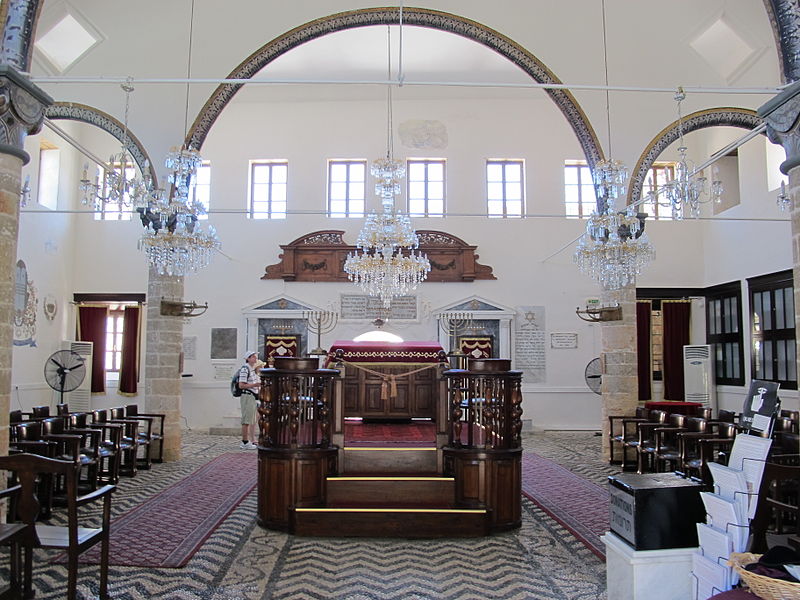 This synagogue owns the title for being the oldest Jewish synagogue in Greece, and the sole remaining synagogue on the Island of Rhodes used for services. In its peak, in the 1930s, the Jewish community had a population of approximately 4,000 people. During the past five hundred years, the background of the Jews of Rhodes was influenced principally by the Jews who fled Spain at the time of the Spanish Inquisition. Kahal Kadosh Shalom means Holy Congregation of Peace and the building is still used for prayer when visitors or former residents and their families visit the Island for Friday night prayer services, High Holiday service and for special occasions. 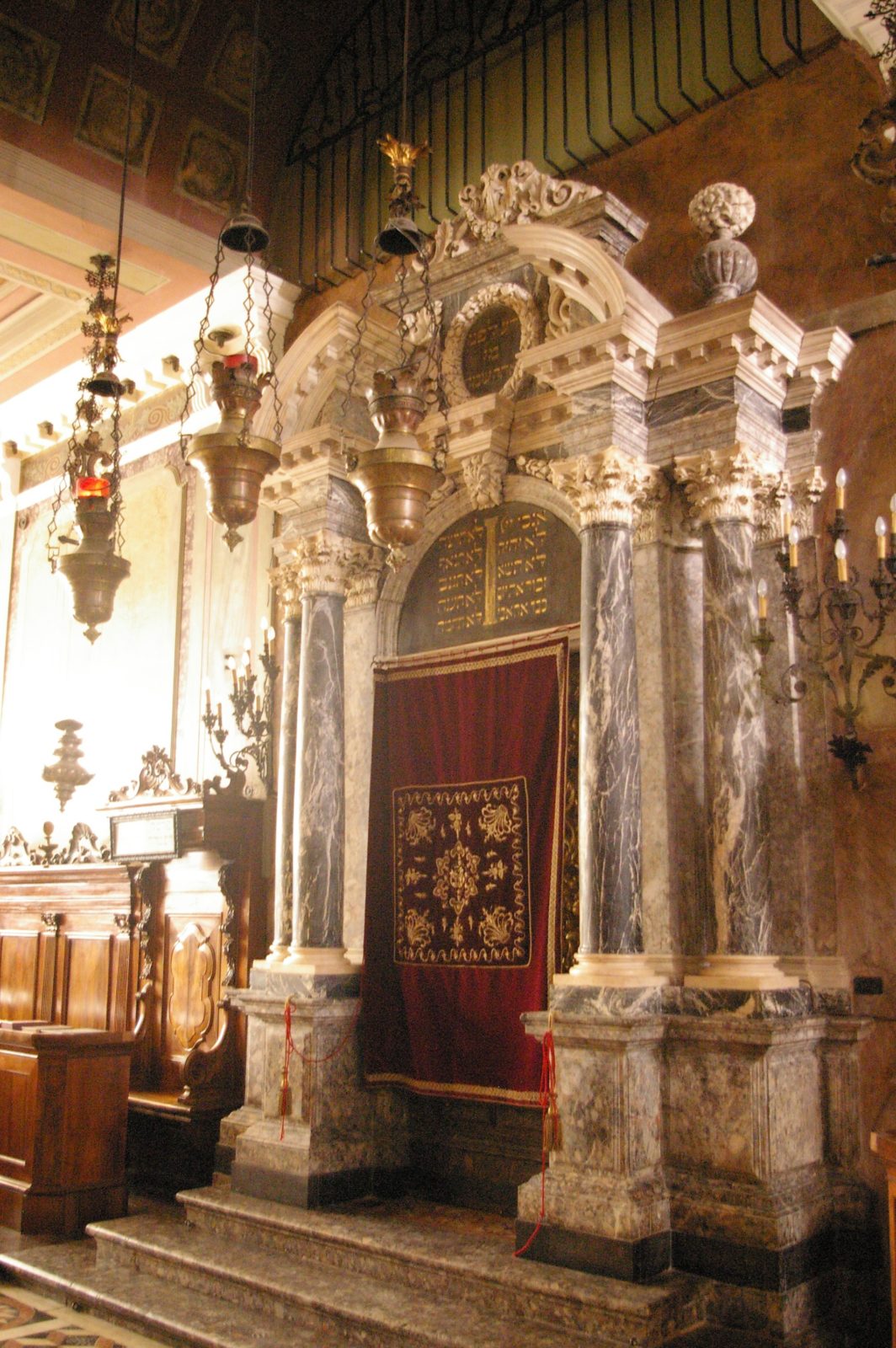 This synagogue is the only one still in use of the several that flourished in the university town of Padua from the Renaissance through World War II. It was under renovation for several different years and then closed in 1892 when the community built a modern synagogue, but reopened after the war because in 1943 the modern synagogue had been burned down by fascists. Padua was actually the only university city in Europe to accept Jewish students in the school of medicine back in the 15th century. The area between the Torah Ark and Bimah is a coffered barrel vault, with large, heavily-carved baroque rosettes in each recess. 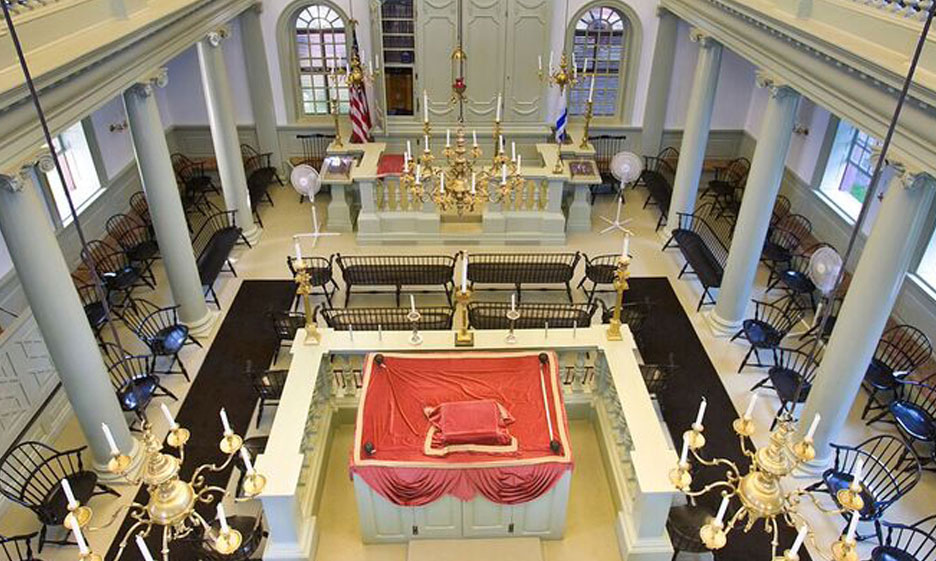 The Touro Synagogue is the oldest synagogue building still standing in the United States dating to the colonial era. It was built for the Jeshuat Israel congregation in Newport which was founded in 1658 by the descendants of Jewish families who fled the Inquisitions in Spain and Portugal and who themselves left the Caribbean seeking the greater religious tolerance that Rhode Island had to offer. Each year, over 30,000 people visit the synagogue to pray and see its magnificent interior. The Touro Synagogue stands as a symbol of religious freedom for all Americans and was designated as a National Historic Site in 1946.