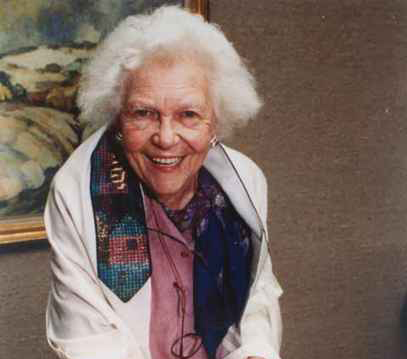 Judith Kaplan Eisenstein enjoyed her first bat mitzvah so much she had a second!*

Did you know the first Bat Mitzvah took place 95 years ago?

The following article provides a concise introduction to the evolution of the bat mitzvah in American Jewish life. We thank our friends at the Jewish Women’s Archive for allowing us to reprint it (in excerpted form) on Breaking Matzo.

Today, a Jewish girl coming of age is likely to mark her entry to Jewish adulthood with some ceremony. But this was not always the case. The first Bat Mitzvah ceremony in America was celebrated in 1922 by Judith Kaplan (Eisenstein), daughter of Rabbi Mordechai Kaplan. This “shocking” event consisted of 12-year-old Judith reading a passage from the weekly Torah portion in Hebrew and English from the printed humash (first five books of the Bible), and reciting the traditional blessings that precede and follow the Torah reading. Though Rabbi Kaplan was an influential leader in the Conservative movement (and later the founder of the Reconstructionist movement), his innovation was not immediately embraced.

In the Reform movement, girls had already been allowed to participate in the confirmation ritual that marked the end of one’s Jewish education. Jews in Western Europe and America had developed the confirmation ceremony in the nineteenth century to adapt their religious practice to that of the majority cultures, and they included girls to prove that Jews were “modern.” By the second half of the nineteenth century, confirmation — rather than Bar Mitzvah — was an accepted rite of passage in the American Reform movement.

Since Bar Mitzvah had become less important in the Reform movement, and since Orthodox Jews considered gender segregation in the synagogue religiously non-negotiable, the rise of the Bat Mitzvah ritual — and the struggle to define what it would look like — primarily took place in the Conservative movement. The Bat Mitzvah ceremony offered congregations a way to acknowledge a desire for women’s social equality and to provide a structure for Jewish education for girls. By 1948, some form of Bat Mitzvah ceremony was held in about one-third of Conservative congregations, and by the 1960s, it had become a regular feature within the movement. Until the 1980s, however, the ritual was usually not a precise parallel of the Bar Mitzvah. B’not Mitzvah ceremonies were often held during Friday night services, when the Torah is not read.

Although it was designed simply to offer public recognition of a girl’s coming of age, the Bat Mitzvah rite raised questions about the status of women within the synagogue. How could a girl be called to the Torah as a Bat Mitzvah and then never have such an honor again? The Conservative movement’s rabbinical body grappled with this issue in 1955, ultimately extending aliyot (the honor of being called to the Torah) to women. This step paved the way for full equality of women within the Conservative synagogue, which gradually prevailed in the 1970s and 1980s.

The rise of feminism shaped the practice and popularity of the Bat Mitzvah ceremony. As girls and women gained rights and equality within secular society, they came to expect — and demand — similar treatment within the Jewish community. This push to acknowledge the equality of women as Jews led every American Jewish denomination from Reform to modern Orthodox to adopt some type of Bat Mitzvah ceremony, among other changes such as the ordination of women as rabbis (1972 in the Reform movement, 1975 in the Reconstructionist movement, and 1985 in the Conservative movement). The form of the Bat Mitzvah rite varies according to the custom of the particular denomination. In recent years, many communities have added other, non-ritual components such as community service projects to the Bat Mitzvah experience.

Some women of earlier generations have, in the past 25 years, also turned to the Bat Mitzvah ceremony as adults to seize an opportunity they lacked as a child, to expand their Jewish knowledge and skills, and to signify their assumption of the rights and responsibilities of Jewish adulthood…

Though Bat Mitzvah has secured a central place in American Jewish communal practice, it continues to evolve, taking on new rituals and meaning in each generation. Furthermore, communities continue to confront challenging and sometimes divisive questions of ritual practice and status within the synagogue. The case of Bat Mitzvah, however, suggests that American Judaism is creative and flexible, with room for many different approaches to addressing changing social needs and mores.

We also recommend exploring the “My Bat Mitzvah Story” curriculum on the JWA site.