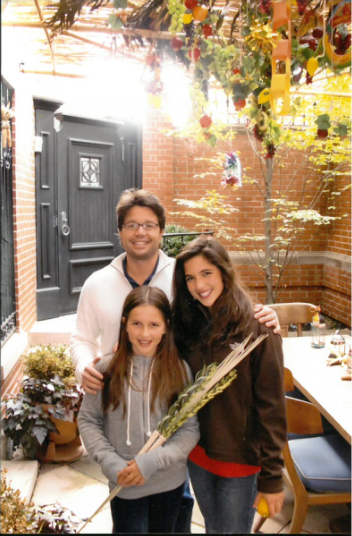 Succot is a holiday that celebrates the fall harvest, and for this holiday we make a succah (temporary booth) in our backyard. Our succah is made out of wood panels and a roof of bamboo and leaves. It is similar to a fort. Every year for Succot, my family has a big party. Our friends and family come over and the younger kids make paper chains, drawings, beaded strings, and many more things with which to decorate the succah. Once they make these decorations, they all take turns standing on the ladder to hang them from the top of the succah.

When I was younger I would make pink and purple paper chains, drawings of my dogs, strands of big pink beads, and big red paper hearts. Once I finished making my decorations I would head over to the sukkah and climb up onto a ladder to hang my creations. I was up on that ladder for hours, and I refused to let anybody else use my ladder to hang their decorations.

Since the ladder was not sturdy, an adult would always have to hold the ladder while I was standing on it. I would stay up there for the whole party while everyone else took turns on the other ladder.

For many years this is what our parties would be like. Every year I would make my paper chains and drawings and stay on the ladder for hours making the other kids jealous. It was like this until about three years ago, when I realized that I was no longer one of the youngest kids at the party. There were kids much younger then me who had never gotten a chance to hang their decorations from the ladder. I then understood that I could not dominate the ladder anymore; I had to give the younger kids a chance. This was when the whole succot party changed for me. I was no longer a greedy little kid who could get away with hogging the ladder for hours. I was a responsible and mature ten-year-old, and I needed to act like one. After I realized this, I would only stay up on the ladder for a few minutes and then step down to let others have a turn. My parents and all of the other adults were impressed with how I was growing up and becoming less selfish. I was proud of myself too; I felt like I had become a big kid.

Now the kids at the succot party look up to me like I am an adult because they are so much younger than me. My role at the succah parties today is to help the little kids when they make their decorations. I help them cut the paper chains, and I hold the other end of the string while they slide the colorful beads onto it. After they finish, I walk over to the succah with them to hang the decorations. I am more mature and older now, and it is the younger kids’ turn to hang up their own decorations. I stand on the ground and hold on to the ladder, supporting it solidly. I look up and watch as the younger kids climb up with big smiles on their faces. I watch as they hang up their decorations for the first time. I know that I am no longer a little kid, and it is their turn to hang their decorations and stand on top of the ladder for the very first time.