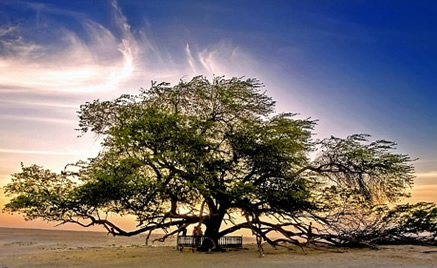 The remote deserts of Bahrain are a hot and inhospitable place. It is not the sort of habitat where you would expect life to survive, let alone thrive. Against the odds, thriving is exactly what one magical tree has done.

Growing in a flat and desolate part of desert, the Tree of Life or Sharajat-al-Hayat has prospered. This mesquite tree has grown over 32-feet-tall despite there being no discernable source of water for it to draw from. According to local history the tree was planted in 1583 and has thrived in the over 400 years since.

Scientists have been baffled by the tree’s survival. Mesquite trees can store a large amount of water, but they still need a source of water to grow. No one has been able to locate this source and no scientific explanations for the Tree of Life’s survival have been proven.

The tree is a symbol of hope and pride to the entire country of Bahrain. Just like the tree, the people of Bahrain have thrived and flourished in the island’s deserts.

It offers more than just symbolic benefits as well. The tree’s resin is turned into candles and gum, while its beans are used to make jams and wines. The spot where the tree stands is also full of historic treasures, In 2010 archaeologist founds 500-year-old artifacts in the area around the tree.

The tree’s natural majesty and incredible story draw tens of thousands of tourists each year. Sadly, these crowds have drawn bad actors as well and the tree frequently suffers damage from vandals. Recently the government of Bahrain installed an iron fence to protect the tree, preserving this fantastic landmark for future generations to enjoy.

Fun Fact: The Tree of Life was referenced by Steve Martin’s character in the film L.A. Story in which he calls it one of the three most mystical places on earth.