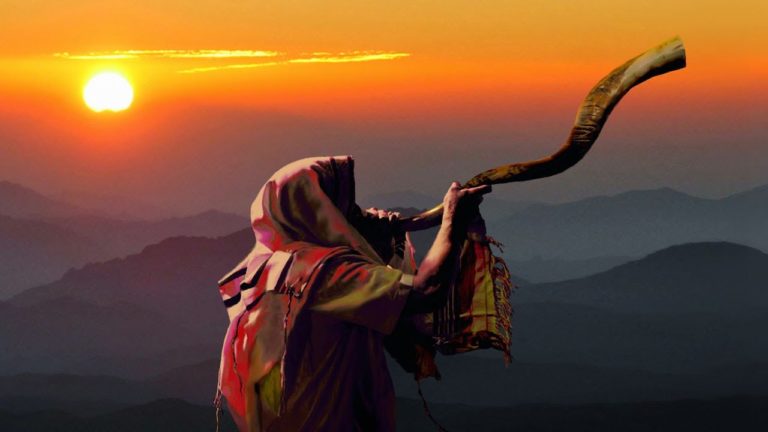 One of the highlights of the Jewish New Year is witnessing the blowing of the shofar. As congregants surround the shofar, the sound inspires celebration, jubilation, and unification. But what is a shofar and what is the deeper meaning behind its blowing?

On Rosh Hashanah, we commemorate the creation of the world, which also represents the coronation of G-d. Just as a trumpet is often sounded in honor of a king’s coronation, the shofar is sounded to honor and acknowledge G-d’s role as king of the universe.

The shofar is a trumpet-like instrument made from a hollowed out ram’s horn. The shofar is blown during the daylight hours of both days of Rosh Hashanah. The sound made by blowing into the shofar is referred to as a blast. There are three different blasts used in ritual shofar blowing. The Tekiah is one long blast, the Shevarim is three shorter blasts, and the Teruah is nine or more very brief blasts.

The use of a ram’s horn also symbolizes the ram that Abraham offered as a sacrifice to God in lieu of his son, Isaac. This example of the heroism and faith of our forefathers encourages us to strive for the same. Furthermore, the great resonance of the shofar reminds us to remain humble in the face of God’s glory, as well as the inevitable promise of Judgement Day, in which we will be evaluated based on our deeds. It reminds us that God is the source of all life, but also has control over our deaths. In this context, the shofar signals the eventual coming of the Messiah.

In the context of Rosh Hashanah, however, there is also a more solemn meaning behind the shofar. As we listen, we enter The Ten Days of Repentance. During this time, we take responsibility for our actions and make a promise to ourselves and God to act more righteously in the coming year. This period ends on Yom Kippur, when we again rejoice upon the sounding of the shofar.

While these are the typical explanations for the symbolism of the shofar, there are several other meanings. The shofar is representative of the calls of the biblical prophets who called upon the Jewish people to become better in the service of God. The shofar also evokes the freedom we gained when we returned to the Holy Land, the destruction of the Temple, and the need to keep fighting for its renewal.

The following is a video of my Rosh Hashanah dinner, during which I sounded the shofar.