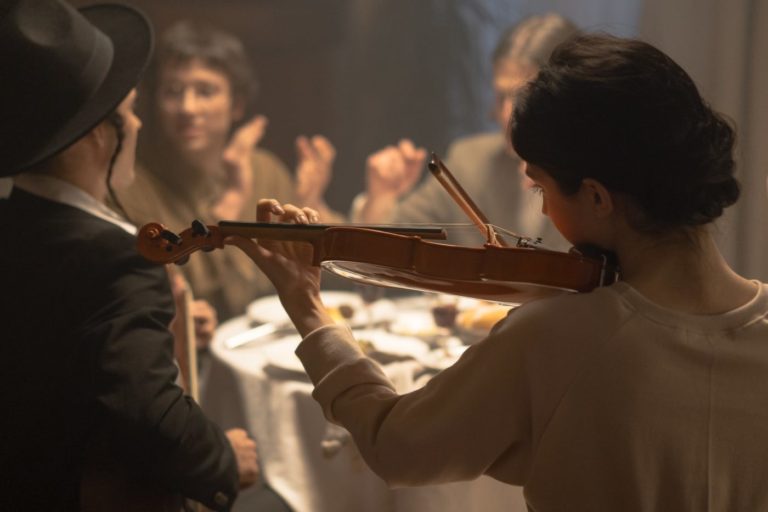 The following three parables discuss the importance of finding meaning and experiencing joy during the celebration of Jewish holidays. The first parable discusses the value in making Shabbat joyous, celebratory and community-oriented. The second parable highlights the significance of recognizing the Torah as a source of blessing, a basis for all celebrations, and a framework for connections and the creation of joy. The final parable helps us appreciate the unwavering relevance of the story of Passover: starting with Moses and continuing today. By understanding the significance behind the holiday, you can make your own Seder unique, meaningful, personal. Nevertheless, by maintaining the true meaning of the occasion, even Moses would recognize the value in your celebration today.

Each of these three parables instructs us to find the joy in celebrations. Shabbat encourages us to seek out joy, celebration, and human connection. Torah, on the other hand, is the music to be played and shared with others in a non-linear manner – integrated in daily life. Finally, Moses and the story of Passover show us how to make meaning in our daily lives by continuously moving forward on your journey. Shabbat, Torah, and Passover are intended to be living tools to incorporate in your every day life.

Learning from The Baal Shem’s Dream

The Sadigurer Hasid, Reb Leibush Istriker, related the following legend, while seated at the communal third meal of the Sabbath:

When the Besht was still seeking the proper way to serve the Lord, he found that the observance of the Sabbath according to the injunctions of the later Rabbis practically prohibited any movement, and filled a man with anxiety lest he transgress some strict regulation. He believed that this contradicted the command of Isaiah to ‘call the Sabbath a delight’ (Isaiah 58:13). He pondered on this for a long time, and in the night he had a dream:

An Angel took him up to Heaven and showed him two vacant chairs in the highest place in Paradise, brilliantly illuminated, as if with vari-colored gems. ‘For whom are these intended?’ he asked. ‘For thee,’ was the answer, ‘if thou makest use of thy intelligence; and also for a man whose name and residence I am writing down for thee.”

He was next taken to Gehenna at its deepest spot, and shown two vacant seats, burning with hellish flame. ‘For whom are these intended?’ he asked. ‘For thee,’ was the answer, ‘if thou makest no use of thy intelligence; and also for a man whose name and residence I am writing down for thee.”

In this dream the Besht visited the man who was to be his companion in Paradise. He found him living among non-Jews, ignorant of Judaism, except that on the Sabbath he gave a banquet for his non-Jewish friends, wherein he greatly rejoiced.

“Why do you hold this banquet?’ he asked the Besht. ‘I know not,’ replied the man, ‘but I recall that in my youth, my parents prepared admirable meals on Saturday, and sang many songs; hence I do the same.’ The Besht wished to instruct him in Judaism, inasmuch as he had been born a Jew. But the power of speech left him for the moment, since he realized that the man’s joy in the Sabbath for be marred if he knew all his shortcomings in the performance of the religious duties.

The Besht then departed, in his dream, to the place where his companion in Gehenna dwelt. He found the man to be a strict observer of Judaism, always in anxiety lest his conduct was not correct, and passing the entire Sabbath day as if he were sitting on hot coals. The Besht wished to rebuke him, but once more the power of speech was taken away from him, since he realized that the man would never understand that he was doing wrong.

Thereupon the Besht meditated on the whole matter, and evolved his new system of observance, whereby God is served in joy which comes from the heart.

In the above story, when the Besht’s “companion in Paradise” is asked why he holds his banquet, he is left without an answer. The only explanation he can give is that in his youth, his parents did the same. While the meaning behind this tradition didn’t say with him in his adulthood, the sentiment did. As such, he became a consistent host of Shabbat dinners, not knowing the years of tradition and history behind his actions. This dinners were purely a matter of joy and celebration. The Besht knew that, should he learn about the formal requirements behind a Shabbat dinner, the sentiment would be marred.

On the other hand, when “his companion in Gehenna” is so strict in his adherence to the rules and requirements of Shabbat that he is filled with constant anxiety. His entire Shabbat was spent in fear of breaking a rule, and the intended sentiment of the occasion was lost on him. The Besht wished to explain this shortcoming, but knew that doing so would be meaningless to the man.

Oneg shabbat – to enter in the joy of shabbat

In reality, the most meaning can be found from a combination of the perspectives of the two men described in the story. Being aware of the purpose behind your actions can make them more meaningful, but being too aware of these regulations can distract from the moment itself.

I heard the following parable from my grandfather [the Baal Shem Tov]:

A musician was once playing the most beautiful melody, with a wondrous rhythm and all the sweetness in the world. All who heard him were captivated by the sweetness and joy of his melody, and they danced until they almost touched the ceiling.

The entire room was filled with great joy, rhythm and sweetness. The closer one came to the musician, the closer he would draw, having all the more pleasure and dancing all the higher.

In the middle of all this, a deaf man came along, and he could not hear the beautiful music at all. All he saw were people wildly dancing, and he thought that they were mad. His only thought was, “What kind of joy is this?”

Spirituality is not meant to be experienced alone. If you were blind and heard music, but could not see the celebration, you are not exposed to the entire experience. In this story, the musician could be interpreted as a Rabbi, while the music is Torah. By definition, seeing is a chemical reaction of light particles going through your iris, refracting on the retina, and stimulating the optic nerve and sending signals to the brain. Understanding, however, involves mind, body, and spirit. We must see, hear, and feel with the heart in order to get the full picture. Historically, the Baal Shem Tov brought Kabbalah to the masses through stories, simple spiritual practices, and joyous celebrations. Many learned Jews were not interested in this newly amplified manner of celebration, yet Kabbalah gave this community a sense of active joy, celebration, and engagement. In this way they learned how to celebrate with the heart, rather than simply embracing the cerebral stimulation of the mind.

Rabbi Yehuda said in the name of Rav:

When Moshe went up to the heavens (at Mt. Sinai),

He found God sitting and fastening crownlets to the

Letters of the Torah.

He asked: Master of the universe, who is delaying

You (in this way the giving of the Torah)?

God responded: There will be a man who will live

Many generations from now whose name is Akiva

Son of Joseph, and he will derive heaps of laws from

Every jot and title.

Moshe said: Master of the universe, show him to me!

Moshe went and sat behind the eighth row of

He did not understand what was being said.

But when the discussion reached a certain point,

Rabbi Akiva’s students asked: “Rabbi, what is the

Source of the authority of these teachings?”

Law given to Moshe at Sinai.

Moshe returned to God and said:

Lord of the Universe, you have such a man (as Akiva)

And yet you give the Torah through me?

God replied: Be silent: Thus have I decided.

A meaningful life comes from continued learning. In this story, it seems as if Moses is the student in the back of the class – not understanding or grasping the concepts being taught. As the meaning becomes more apparent, however, he agreed and connected with the spirit. Learning has no end point. You can always learn more. As you are confronted with new ideas, you’ll slowly begin to absorb more knowledge and understand them more. There’s an elasticity of Moses’ teachings that allow them to have meaning today. We can learn from his experience by continuing to study, question, and learn. The guy sitting on hot coals at Shabbat is the one who can’t move forward. He has detached himself from the moment and the meaning of the occasion is no longer present in his actions, thoughts, and behaviors. The one who hears the music and celebrates is the one who grows the most. He allows himself to make mistakes, hear new information, and grow through learning. If you push a snowball off a mountain, it will continue to get bigger as it travels down. As people, we have the opportunity to gain more and more knowledge throughout the course of our lives. All greatness gets greater when others take part in it. Drawing on the experiences, knowledge, and values of others can help us learn more about ourselves, the people we interact with, and the world we live in. Rabbi Akiva could not have done it without Moses, and we could not be doing it without Rabbi Akiva.

Each of these three parables instructs us to find the joy in celebrations. Shabbat encourages us to seek out joy, celebration, and human connection. Torah, on the other hand, is the music to be played and shared with others in a non-linear manner – integrated in daily life. Finally, Moses and the story of Passover show us how to make meaning in our daily lives by continuously moving forward on your journey. Shabbat, Torah, and Passover are intended to be living tools to incorporate in your every day life.