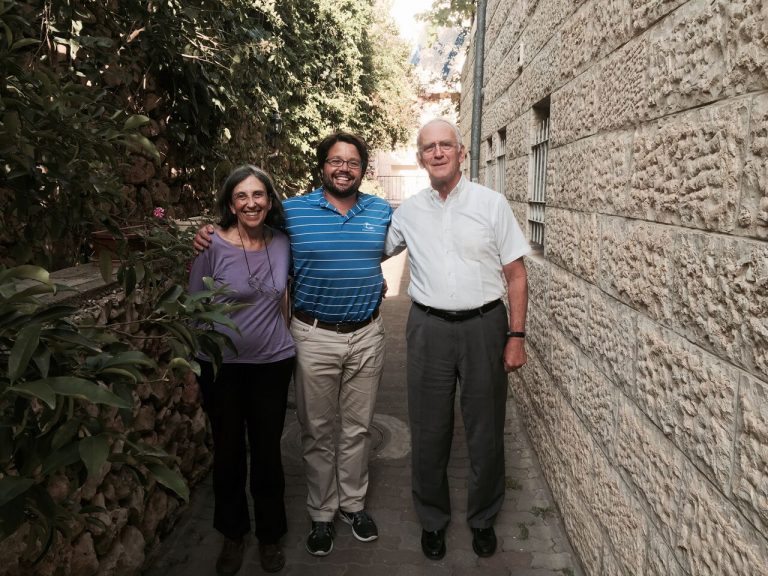 In 2016, Hanukkah will overlap with Christmas and New Year’s! For some families, that means Chrismukkah! In 2013, Hanukkah overlapped with Thanksgiving and many families had Thanksgivukkah!

Why does the Jewish Calendar move so much? The simple answer is that the Jewish Calendar is partially based on the lunar calendar, but with seasonal adjustments for the sun. The Israelites were an agrarian society and thus had their lives based on the moon and the change of seasons. Jewish Festivals are associated with the seasons. For example, Passover celebrates the arrival of spring. Succot celebrates the bountiful fall harvest. Hanukkah falls close to the winter solstice.

Please read this post written by Andy’s uncle Rabbi Daniel Goldfarb (pictured above with Andy and Rabbi Daniel’s wife Dr. Ada Goldfarb), The Conservative Yeshiva, Jerusalem which explains the origin and mechanics of the Jewish Calendar.

I – An Introduction to Calendars

Calendars are almost as old as peoples. On the one hand they help order the life of the community, but they can also express deeper values. The first Commandment given to the Jewish people, while still in Egypt, was the Jewish calendar (Ex 12:2), a step on the path to independence from Egyptian bondage upon which the Children of Israel were about to embark.

Over history nations have introduced or revised calendars following major events, e.g., the French Revolutionary Calendar [1793, 30-day months of three 10-day weeks] and the Bolshevik Calendar [Russia 1929 – six 5-day weeks each month], though this has become more difficult to do in recent times because of international relations and the global nature of commerce. Today it is important for nations of the world to be “on the same day,” even if not “on the same page.”

II – Is the Jewish Calendar Solar or Lunar?

The Jewish Calendar has an important lunar component – Exodus 12:2 says: “This month/new moon shall be the beginning of the months for you.” For convenience we round off the 29.5-day average of the lunar orbit by making one month 30 days long and the next 29.

When the Jews were sovereign in the land of Israel and the Temple was standing, Rosh Hodesh (the First Day of the New Month) was a major festival. It was declared by the Court in Jerusalem on the basis of testimony from witnesses who had seen the moon’s new (“waxing”) crescent. The dates of holidays like Rosh Hashanah and Pesach were known only after the Court had designated the start of the month in which each holiday falls. Once decreed, messengers would go out to notify the Jewish communities, as far as Babylonia; later bonfires were lit, with word of the new month travelling from one hilltop to the next. But when sovereignty was lost (after 70 Common Era) the system of the Court in Jerusalem declaring the New Month became impractical. Since the fourth century Jews have used a calculated calendar, which reduced the importance of the New Moon declaration.

But the Torah is also cognizant of the Solar calendar – Pesach (Passover) is connected to Spring (Deuteronomy 16:1), and Sukkot (Tabernacles) to the Fall Harvest (Exodus 23:16), so in the end the Jewish Calendar is a blend, luni-solar. The starting point is the lunar month, but something must be done to keep Passover in the spring and Sukkot in the fall.

III – Reconciling Lunar and Solar in the Jewish Calendar

The way we “have our cake and eat it too” – or in this case, maintain a calendar with both lunar and solar elements – is by intercalating (“inserting, adding”). Remember, in the Gregorian system, we “intercalate” a day every fourth year, to accommodate for the fractions of days which accumulate. The Jewish calendar adds a whole month (Adar 1) seven times in 19 years, “roughly” one year in three – actually Years 3, 6, 8, 11, 14, 17, and 19.

A little math coming up, don’t get scared. The Bottom Line – at the end of 19 years the lunar and solar calendars will meet again, which is why your Gregorian and Hebrew birthdates will coincide when you reach age 19, 38, 57, 76, etc., subject to a one-day (or very rarely two-day) “statistical deviation.”

Interestingly enough, this calendar-adjust system is not unique to the Jews. It is exactly the system used for the Chinese Calendar, and is first attributed to Meton, a Greek mathematician-astronomer, who figured out the math, without computers or smartphones, about 2500 years ago, though there is no certainty that either the Jews or the Chinese knew of Meton.   Pretty amazing!!!

IV – So Why does Hanukkah Run from Christmas to New Year this Year?

Segment 1, years 17 – 8, loaded with Leap Years, adds a month vis-à-vis the secular calendar (making holidays late – maxing after Adar 2 in year 8), whereas Segment 2, with only two leap years in the 8 year period, leave us a month short (early).  Voila, year 16, which was three years ago, is the LOW TIDE of the 19 year cycle, and thus the earliest holidays (Rosh Hashana was Sept 5 in 2013). The individual years are like waves on the beach, each shorter or longer; the groups of years are like the tides.

So why are we at High Tide, almost, only three years later?  Because two of the three years since year #16, years 17 and 19, were Leap Years, which means that in the three years from Rosh Hashana 2013 (Sept 5) we have had added 27 days (+ 19 – 11 + 19) to the Jewish Calendar, which brings Rosh Hashanah to Oct 2, 2016 (one day off, due to other calendar factors).  Within three years the Jewish holidays have “moved” a month. Or maybe they haven’t moved at all; Rosh Hashana is always 1 Tishre. Maybe the Gregorian calendar has moved!!!