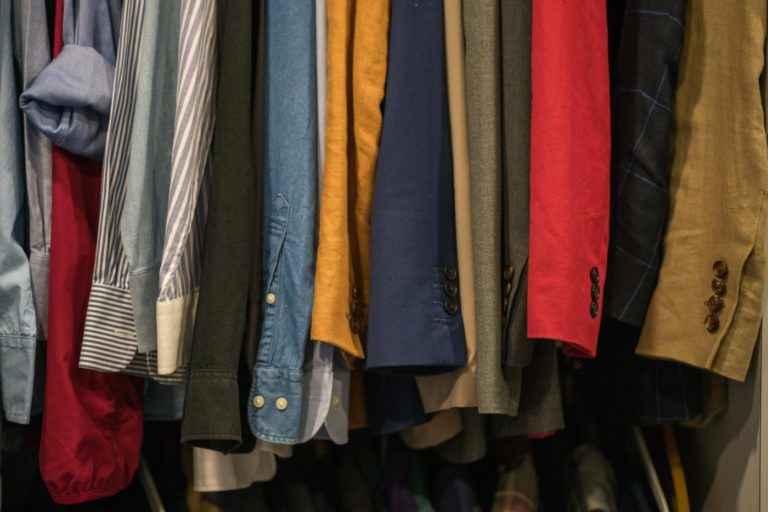 What clothes most reflect your inner self?

When Gal Gadot reprised the role of Wonder Woman, she received a lot of attention. We were all so proud that an Israeli woman could secure such an iconic role and earn such widespread international praise and prominence. But what is Wonder Woman without her outfit? Every character, whether supernatural, biblical, or ordinary, bears an identifying outfit, tool, or symbol. I want to explore the integral role clothing has played throughout the Bible.

Adam and Eve – Loss of Innocence

The concept of clothing affecting one’s fate appears over and over again in the Torah. Even Adam and Eve, who were free from the burdens of physical coverings, are identified by their unique role as the only characters in human history who lacked clothing and “were not ashamed” (Genesis 2:25). Because they were unable to follow their faith, this innocent disposition did not last for long. In the Garden of Eden, Eve was enticed by temptations of a snake. He convinced her to take a bite from the forbidden fruit (as deemed by God). Once she did, Adam and Even became embarrassed of their nakedness. This newfound requirement to cover up with clothing symbolizes their loss of innocence. This is the first time we see the harmful consequences of a disconnected and separated inner soul and outer shield.

Jacob and Esau, who famously battled over their familial birthright, came face to face with the importance of clothing (Genesis 27:15-37). In this context, “birthright” refers to the obtaining of leadership and judicial authority within a family upon their father’s (Isaac’s) passing. Isaac, who was blind, distinguished between his two sons through touch. Granting the blessing of the birthright took place during a ceremony, complete with ceremonial clothing. Esau, who was the firstborn and to whom Isaac intended to give the blessing, would have been wearing a garment with unique patterns and textures — allowing the sightless Isaac to identify him. But Rebecca, Isaac’s wife, had a different idea in mind. She wished for Jacob to obtain the blessing of his father and carry on the birthright. She took Esau’s garments and gave them to Jacob, allowing him to trick Isaac into blessing him with the family birthright (Genesis 27:15). By drawing on the deceitful capabilities of clothing, Rebecca enabled Jacob to get the birthright and become a patriarch.

Jacob and Leah – Veil of Obfuscation

Later, this deceitful act comes back for Jacob when he is tricked into marrying Leah. Jacob had intended to marry Rachel, and made a deal with her father, Laban, in order to do so. Before he could marry Rachel, Jacob had to work for seven years. Laban, however, had other plans and wanted Jacob to marry his other daughter, Leah, instead. After seven years, Jacob had completed his duty. During the wedding, however, Laban covered Leah with a veil, so as to not let Jacob know who she really was. In this way, a piece of clothing is again utilized to enable deception — only this time, against Jacob (Genesis 29:21-25). Once he discovered the deception, Jacob agreed to work an additional seven years to earn Rachel’s hand in marriage, as well (Genesis 29:20-45).

In the story of Joseph, we see again how clothing can influence a person’s life (Genesis 37-50). The Book of Genesis began with the creation of the universe. Later, the book concluded with the reconciliation of familial conflict. Joseph’s father, Jacob, gave Joseph his famed multicolored coat, complete with sleeves that were far too long for chasing after sheep in and, therefore, exempting him from such duties. This gift was a symbol of Jacob’s favoritism towards Joseph and an indicator that he trusted Joseph to lead the family over his other sons. Joseph’s brothers, vengeful with anger and jealousy, stole the coat and sold Joseph into slavery. As a result of their resentment, they used the coat against Joseph in order to deceive their father. They bloodied the coat and presented it to their father as proof of Joseph’s death. In this case, the coat symbolized immense power and led brothers to turn against their own flesh and blood.

Joseph became a slave in Egypt and was later appointed a viceroy by Pharaoh. Part of his role was to prepare the country for the upcoming famine and protect Egypt’s supply of grain. Word of this supply traveled to Canaan, so Joseph’s brothers journeyed to Egypt to buy precious resources. When they saw Joseph, they didn’t even recognize him. In this scenario, Joseph could have spited his siblings out of anger, revenge, and contempt, but instead, he welcomes them.

For the rest of their lives, Jacob and his brothers confronted the complexities of death. When Jacob died, Joseph’s brothers feared Joseph would enact revenge upon them, saying “It may be that Joseph will hate us, and will fully requite us all the evil which we did unto him’” (Genesis 50:15 JPS Tanakh 1917). But when they approached him, Joseph was forgiving. He said, “‘don’t be afraid. I will provide for you and your children.’ and he reassured them and spoke kindly to them” (Genesis 50:21 JPS Tanakh 1917). In this moment, the sons are able to come together in unison and bury their father, Jacob, together. Upon his burial, the deceit is finally over.

Later, upon Joseph’s death, his brothers promised to honor Joseph’s dying wish and bring his coffin to the Promised Land, should they ever leave Egypt. When Moses eventually made this trek, he found Joseph’s tomb and brought it to the Land of Israel. In this story, we see a fractured family brought back together. In this moment of forgiveness, a first for brothers, Genesis concludes.

When Exodus begins, the theme of familial unity continues to develop as Miriam and Aaron work together to protect Moses. In this book, Pharaoh decreed that any male Hebrew baby was to be drowned in the Nile River. Confronted with this fate, one mother made the difficult decision to part ways with her newborn baby in an attempt to save his life. She wrapped him in a blanket — providing him with protection from the elements. When Pharaoh’s daughter, Bit Ya, found this child, she recognized the textiles in his blanket as those of the Hebrews. She named him “Moses,” which means “drawn out of the water,” and sent Miriam, the child’s sister, to find a woman to nurse him. By doing so, Pharaoh’s daughter allowed Moses to be nursed by his own mother (Exodus 2:3-9), before being adopted into the royal family. In this case, the baby’s blanket reveals his true identity as a Hebrew.

God granted Pharaoh’s daughter special recognition as a reward for her rescuing the Hebrew child and aiding in the realization of His divine plan. When the firstborn Egyptians were killed during the plagues, Moses advocated for Pharaoh’s firstborn daughter and God spared her. While not much is said of Bit Ya in the Torah, the sages found her role in the story very significant. The midrash claims that Bit Ya never died, but was instead granted access to the Garden of Eden. In Derech Eretz Zuta, it reads: “Nine people entered the Garden of Eden while still alive: Chanoch Ben Yered, Eliyahu, … and Bitya Bat Pharaoh.”

You can read more about Pharaoh’s daughter here.

David and Saul – Robe of Reconciliation

In the Book of Samuel, Saul set out to find David and kill him. To stop him, David demonstrated his good faith by drawing on the symbolism of clothing. When given the opportunity to kill Saul, David instead cut off a corner of his robe. Later, he confronted Saul, presenting the piece of the robe he cut off and illustrating how, while he could have used that moment to kill Saul, he merely cut a corner of his robe off instead (1 Samuel 24:11). Here, the robe was an extension of the person. David showed how close he was to killing Saul and, in doing so, exhibited his stealth and desire for reconciliation. Saul could now see, for himself, David’s honor and desire for reconciliation.

One of the most well-known stories in the Torah is that of David and Goliath. In this tale, David volunteered to battle the great giant, Goliath. Before he went, Saul dressed David in heavy armor, a bronze helmet, and protective gear. David, however, refused to wear any of it — it didn’t fit his identity (1 Samuel 17:38-29). Instead, he wore his simple shepherding clothing and faced the giant with only his trusted slingshot. It was this supposed disadvantage, however, that allowed David to eventually beat Goliath, as his agility and precision was not hindered by heavy armor (1 Samuel 17:50) and he remained true to himself by wearing his own clothing. Because David was able to align his outer shield with his inner soul and identity, he was able to defeat Goliath and eventually become the King of the Land of Israel.

With this in mind, I urge you to consider how your clothes affect your abilities. How can your clothing make you more powerful, confident, capable, and respected? Earlier biblical stories show how a disconnect between inner soul and outer shield can lead to deceit and deception. Later, however, we see that a connection between inner soul and outer shield leads to a more integrated, fulfilling, and meaningful life.

Let’s go back to the story of David. Many people probably thought, and still think, that his refusal to wear protective armor was foolish and risky. But, in this moment, I think his ability to remain true to himself was what allowed him to identify his strengths and abilities. He aligned his soul with his external appearance, shaping his character and, eventually, preparing him to help create and rule over the Land of Israel as King. Without a connection to your outer shield, your inner soul cannot flourish. A strong connection to our outer shields of spirituality is what allows us to tap into our fullest potentials.

You can read more about David and his clothing choice in fighting Goliath in the following portions:

“And when the Philistine looked about, and saw David, he disdained him; for he was but a youth, and ruddy, and withal of a fair countenance.”

“And Jonathan stripped himself of the robe that was upon him, and gave it to David, and his apparel, even to his sword, and to his bow, and to his girdle.”

“And he also stripped off his clothes, and he also prophesied before Samuel, and lay down naked all that day and all that night. Wherefore they say: ‘Is Saul also among the prophets?’”

You can read more about David and his fight against Saul in the following portions:

“And the men of David said unto him: ‘Behold the day in which the LORD hath said unto thee: Behold, I will deliver thine enemy into thy hand, and thou shalt do to him as it shall seem good unto thee.’ Then David arose, and cut off the skirt of Saul’s robe privily.”

You can read about Jacob being tricked into marrying Leah (because she was wearing a veil, and therefore could not be distinguished from Rachel) in the following portions:

“And Jacob said unto Laban: ‘Give me my wife, for my days are filled, that I may go in unto her.’ And Laban gathered together all the men of the place, and made a feast. And it came to pass in the evening, that he took Leah his daughter, and brought her to him; and he went unto her. And Laban gave Zilpah his handmaid unto his daughter Leah for a handmaid. And it came to pass in the morning that, behold, it was Leah: and he said to Laban: ‘What is this thou hast done unto me? did not I serve with thee for Rachel? wherefore then has thou beguiled me?’