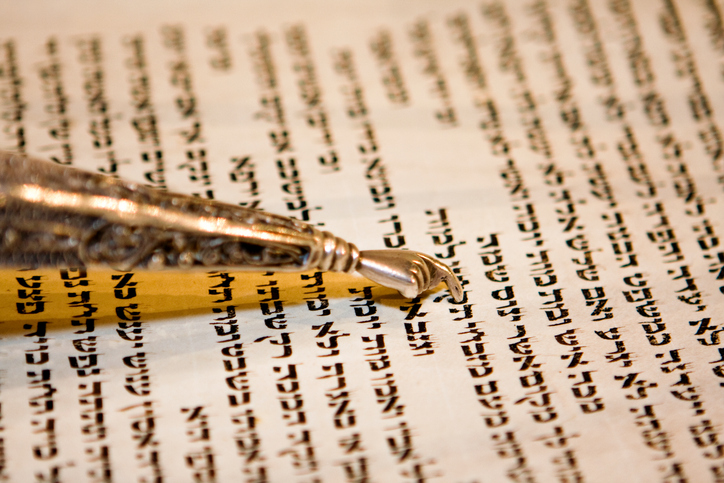 My Torah portion is Genesis chapter 12 through genesis chapter 17. I am specifically reading genesis chapter 17 verses 1 through 10.  But, in order to understand what is going on in those 10 verses, they need to be seen within the context of the whole Torah portion. Genesis chapter 12 begins with God asking Abram and Sarai to leave their native land, kindred, and their father’s house, to a land that God will show them. That journey culminates 5 chapters and 24 years later, with the 10 verses I chant today. In my 10 verses, we’re exploring transformation. The transformation of Sarai to Sarah, and Abram to Abraham. In each person’s name, the letter hay is added in Hebrew, which corresponds to the letter H in English. Their new names are AbraHam, and SaraH. When the letter hay is added to a person’s name in the Torah it signifies the name of God being added to their name. This is because in the Torah Gods name is spelled in hebrew, yud hay vuv hay. Literally, one of the letters of God’s name is being taken, and given to Abram and Sarai.

Ever since I learned about this transformation, it has been on my mind and I have been very curious about what it might mean in my own life, to have the letter hay added in my name. I asked myself this very question; I decided that it could cause me to feel pressured. Or maybe honored. But, if someone I really truly respect gave me an honor, I would want to live up to it. If I had gods name in me, I would know that I was extraordinary. But, I don’t mean better than everyone else, rather what I mean by extraordinary is that I would have the gift of being a part of something far larger than myself.

This summer my family and our friends, the Cutlers, took a trip to Israel. In Jerusalem, we visited the Western Wall. We were standing at the wall, and Randi Cutler asked us if we were feeling a little bit “jumpy”, I didn’t really understand what she meant but then as I stood there longer,  I experienced a strange feeling, a feeling that I had never experienced before. I think this is what Randi meant. The wall is a really powerful place because people have been going there, and having the same feelings as I did for almost two thousand years. The wall has been there longer than I, or any of you, have been around, and will outlive all of us, as well as all of our offspring to come, ulzaraha aharayha, just as it says in my torah portion. To me being extraordinary means to be connected to something larger than myself.

Then I had a second experience which brought another dimension of the passage into focus. This summer I went on a 2 week outdoor adventure program through the mountains in colorado. We had just completed a strenuous first day of our 5 day backpacking trip, and after we had rested a little bit in our tents, our counselors thought it would be fun to do a small hike since it wasn’t that late, and we had nothing else to do that night. There was a small mountain near our camp site, (well, we thought it was small) and we decided to hike it. So at about 9 o’clock at night, my group, which consisted of me, my friend, one more girl, and 9 boys set off on what we thought would be a simple, easy fun, 45 minute hike. After about the first half hour we started to realize that this was no easy 45 minute hike. The top of the mountain was no where in site, and the hike was starting to really wear on us, (keeping in mind we had already had a whole day of backpacking!!) My group of 12 kids started to split up; the few strongest hikers made their way to the far front of the pack, and  the hikers who like to take their time and enjoy the view, (thats me!), were in the middle, and of course there are always those few couple of people who tend to lag behind, so they were in the way back.

After about an hour and a half of hiking with still no site of the top of the mountain, we all started to realize that this hike was very different then we had originally intended. But, being the persevering kids that we are, we kept going, with open minds, thinking that we would reach the top soon enough. The hiking had become somewhat treacherous. It was to the point where I had to lean into the mountain to keep from slipping and falling down. I felt like the mountain was at a 90 degree angle, and I was really scared. I was out of breath, my legs ached, I honestly felt like I was going to pass out. I had no water left, and I had to drink my counselors water which tasted like iodine.

This was not a very pleasant hike, but, I had this image in my mind. An image of me at the top of this mountain, and thats what kept me going. Our whole group was in different places on the mountain. The strongest hikers were way ahead, and my friend Andrew and I were next, and then everyone else was still pretty far behind us. Now we had been hiking for over 2 hours, and I started to loose hope of getting to the top, but I still had that image. When our counsellor, Chris, called up to us and told us that it was getting to dangerous, and that we had to go down, I was really disappointed. The image slipped away from my mind. I felt like I had done all this work, yet had accomplished nothing. I thought it was about getting to the top.

Sometimes the greatest views are not what you see when you look out from the top of the mountain, but what we see when we look inside at our own hearts. In Deuteronomy chapter 8 verse 2 Moses reminds the Israelites that like Abraham, they have journeyed in the wilderness. “Remember the long way that the lord, your God has made you travel in the wilderness. That god might test you, so that you could learn what was in your heart.”

My torah portion begins with the words, “go forth from your native land, and your kindred, and your fathers house, to the land that I will show you”. When I first read this verse, I thought it was only about a physical land, but, as I began to examine it more closely, I realized that this verse was leading me to a bigger idea. This section is not just about physical space, it is about the concept of emotional space.  An emotional space where you can feel God in yourself, similar to what I experienced at the wall this summer. I felt the presence of God within me. This process of learning how to open to this kind of emotional consciousness of space is what leads to having God’s name in you. This is what my torah portion is all about.

The third experience that I had this summer which helped me to understand my torah portion at a completely different level was actually the hardest for me. I had been working very hard on my bat mitzvah speech, it was pretty much finished. And then, my computer was stolen. And I had no other copies of my speech. I was devastated. Although I am still upset about all of the loss I experienced, I now understand, looking back, that another door opened, because that speech was written before the two experiences that made up this speech. In retrospect, it feels clear to me now, that I have been on a journey. And when one goes on a journey, they experience tests, and losses, and sometimes failures. Often times, great surprises, but most of all, one gets to learn what is in their heart.

I think I am now starting to learn that actually the journey never ends, and that there are always amazing times in store. I want all of you to know that it is possible to go on a journey and find God in your heart. If I could give a gift to all of you, it would be the capacity to see all of the extraordinary hearts in the faces of our lives. My dream is that when I see a face, I learn to see the person’s heart.