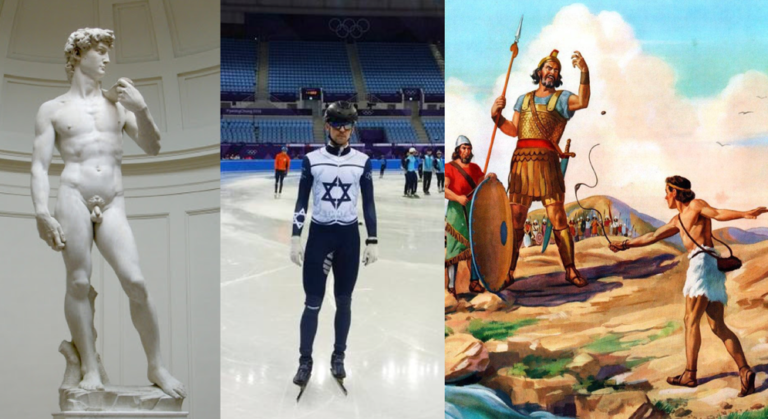 Ice Skating in the Desert

Speed skating is a complicated, high-stakes competitive sport which requires athleticism, focus, and speed. Skaters start together on a track and make their way around it. They start slowly and then speed up as the competition progresses. Skaters must endure years of intense training to learn how to efficiently conserve their energy in order to win. Those are the unspoken rules of the game, but when Vlad Bykanov, an Israeli speed skater, won the 2015/16 ISU World Cup, it wasn’t because he followed the rules.

Everyone knows the story of David and Goliath (Samuel 17:21-52). David, a scrawny, unprepared and unequipped boy, takes on Goliath, the mighty giant. Conventional wisdom says that some twist of fate or divine intervention allowed David to miraculously defeat Goliath. But what if I told you that conventional wisdom has it all wrong? David wasn’t unprepared or unequipped. In fact, years of experience and training had primed him for this exact battle.

In Israel, there is an area marked by valleys and ridges called the Shephelah. It’s a beautiful landscape of vineyards, fields, and forests and historically, it served as a strategic location for hostile armies. 3,000 years ago, the Philistines began to make their way through the valleys of the Shepelah, up through the mountains, and towards the city of Bethlehem. Their goal was simple: to split the Kingdom of Israel into two.

When King Saul heard of this plan, he sent his army to confront the Philistines. Upon arrival, however, the two armies were at a standstill. Neither one wanted to move down into the valley, because doing so would leave them vulnerable on the other side.

In an attempt to break this gridlock, the Philistines sent Goliath, their strongest, meanest, and most capable warrior, down to the valley floor. In doing so, they challenged the Israelites to send their own warrior to partake in single combat and settle the dispute. The 6-foot-9 Goliath descended, towering over the valley in head-to-toe bronze armor and bearing an array of deadly weapons.

The Israelites looked on with fear, knowing that to fight Goliath was to wish death upon oneself. Finally, a young shepherd boy named David approached King Saul and asked to fight the giant. After much pleading, Saul realized he had no choice but to send the boy. Before he went, however, Saul insisted David put on a set of armor. But David refused. He explained that he’s never worn such heavy armor before, and therefore, wouldn’t know how to fight in it. He made his way towards Goliath with nothing but his staff and five stones he picked up off the ground.

The giant sees a figure approaching, but he can’t quite make him out. He urges him to come closer and is offended once he sees the small, staff-bearing shepherd coming to fight him. He’s insulted, saying, “Am I a dog, that thou comest to me with staves?” (Samuel 17:43 JPS). Before he can say much else, however, David launches a rock between Goliath’s eyes, causing him to fall over. David runs towards him, grabs his sword, and cuts his head off. The Philistines run and the Israelites are victorious.

How could David have won? By all available information, he was sure to lose instantly. He has no overpowering strength, no modern weapons, no fancy protection. If he had, however, we might be talking about the victory of Goliath today, instead.

In those times, ancient warfare called for three types of warriors, one of which was the artillery branch, otherwise known as slingers. Slingers, as the name implies, carried a sort of sling that could launch objects towards a target. While this may sound like a juvenile toy, it was actually quite deadly. An experienced slinger could launch a rock at speeds as fast as 78 miles per hour, or 35 meters per second. Furthermore, the rocks in this region were twice as dense as typical rocks, which would effectively render David’s weapon as powerful as a .45 caliber handgun. Lastly, slingers were famous for their accuracy and were trained to hit targets, even moving targets, from up to 200 yards away.

When David approaches Goliath he is much closer than 200 yards. The only factor that could cause him to miss would be Goliath suddenly deciding to move. But he can’t. He’s weighed down by metal armor and heavy weapons. He is waiting for David to approach him and fight him mano a mano. So, he stays still — leaving him vulnerable to the power of David’s aim.

So, what does all this have to do with speed skating and Vlad Bykanov?

David didn’t follow the unspoken rules of the game, and neither did Vlad. If you watch a video of the 2015/16 ISU World Cup, you will notice something peculiar. While most of the competitors maintain modest speeds, slowly building up power as the race goes on, one skater appears to muster up all of his power to pass the other skaters. Anyone who’s watched speed skating knows this is an amateur mistake and assumes the lone skater will run out of steam and eventually fall behind.

After “lapping” the others, the skater again reaches the back of the pack and regulates his speed to match the other skaters. They continue on as they’ve been trained to do, slowly speeding up as the draft from their speed acts as an advantage for the lone skater. Eventually, the skater passes the finish line, throwing his hands up in the air in a victorious state of shock. The other skaters, however, are clueless. They continue racing until, eventually, the second-place skater passes the finish line. He too victoriously throws his hands up in the air. His glee, however, quickly turns to shock as he glances up at the scoreboard and sees he’s been beat. Vlad Bykanov, the Israeli underdog, has just won. He knew that if he played the game just like the other faster, stronger, and more experienced skaters, he’d essentially be admitting defeat. So instead, he did as David did. He turned his opponents’ strengths into weaknesses and shocked the world with his triumph.

Throughout history, we’ve often associated victory with those who play by the rules, who appear to be strongest, and who, on paper, are certain to win. In reality, however, the underdog is the one who must exhibit extraordinary innovation, ambition, and creativity and it is the underdog whose victories are far more satisfying.

Bykanov wasn’t the first speed skater to secure an unconventional win. In 2002, Steven Bradbury stunned the word when he won the gold medal, beating out famed speed skater Apolo Ohno. Throughout the competition, Bradbury maintained a substantial distance between himself and his fellow competitors, remaining a few feet behind them at all times. To the average viewer, it appears undeniable that he is destined to lose. He just wasn’t as strong or as fast as the other athletes. At the last minute, however, one of the skaters falls, bringing down the other skaters with him. Bradbury, though, manages to escape the chaos, crossing the finish line far ahead of the others. While Ohno, who was predicted to be the overwhelming favorite, did not win first place, he later noted he was content with his performance. He knew he had prepared as much as possible and given the race his best effort. With this in mind, he was satisfied with earning second place. 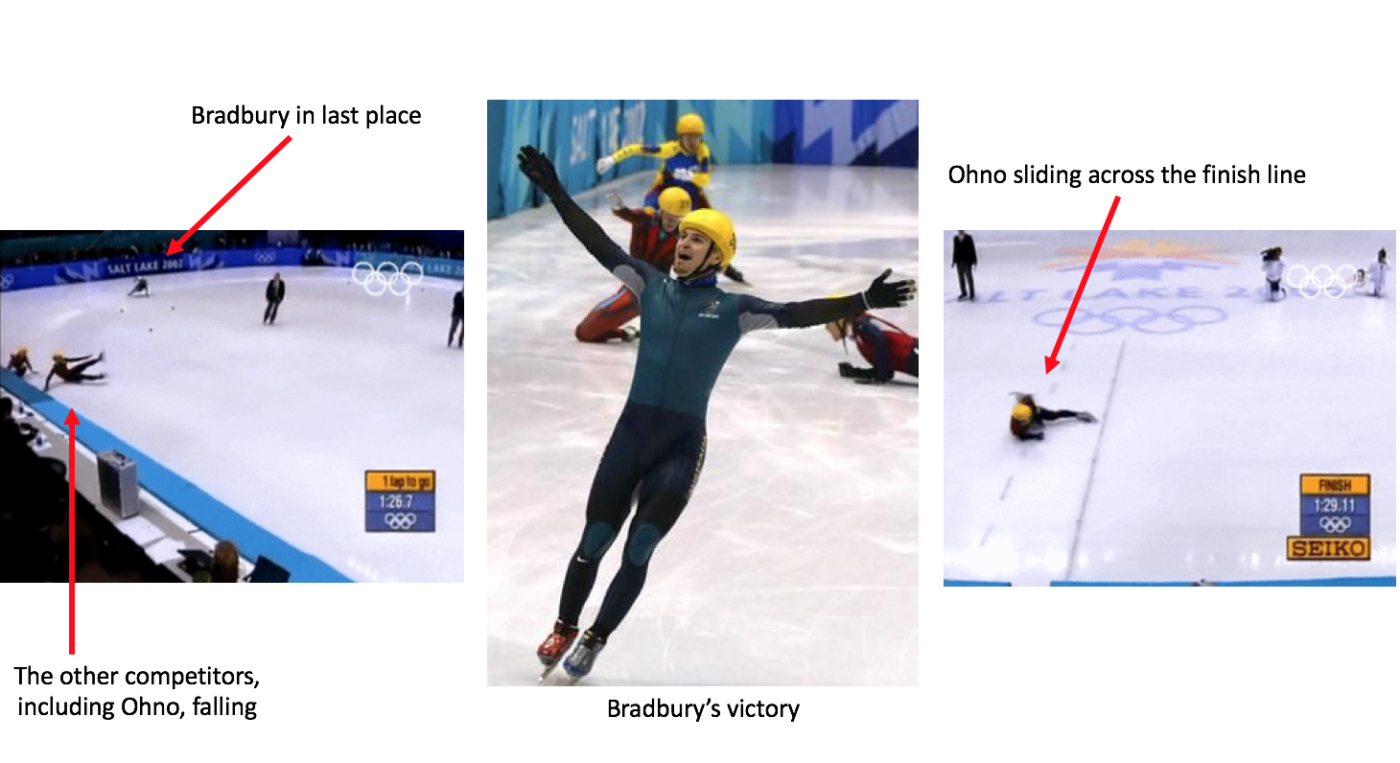 You can watch Steven Bradbury’s race in against Apolo Ohno during the 2002 Winter Olympics in Salt Lake City here:

You can watch Vlad Bykanov’s race on February, 2016 in Dordrecht, Holland here: